He no longer wraps hay as a last resort

“Our failure rate was just too high,” said Dan Funke to those in attendance at the California Alfalfa & Forage Symposium in Reno, Nev.

The veteran Larchwood, Iowa, haymaker was referring to his ability to produce high-quality hay bales that were dry enough for long-term storage and high enough quality for his dairy clientele. 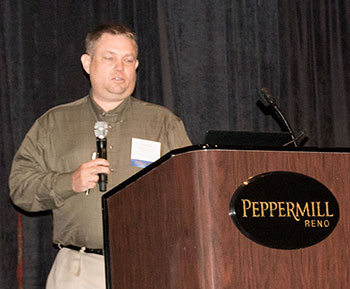 “Our miserable, humid weather with unpredictable and frequent rainfall was inhibiting our ability to make dairy-quality hay,” Funke said. “We started bale wrapping in 2010 as a result of some hasty internet searches and a desperate need to reduce our failure rate harvesting hay. We had tried about every hay drying and preserving tool in the industry up to that point,” he added.

During the mid-2010 season, Funke purchased a stationary individual bale wrapper with a single film dispenser. He described it as a “scary, new frontier,” but the initial results were positive as feed quality started to improve and the farm’s customers liked feeding the wrapped bales.

“Though we were encouraged with the results, I just about killed off my crew wrapping bales. We’d get done baling and then be up half the night wrapping,” Funke related. “We also didn’t have the proper handling equipment.”

In 2011, Funke bought a dual-dispenser wrapper on an online auction. The new machine was capable of picking up and wrapping bales in the field. He also built his own bale squeeze that was capable of handling two wrapped large square bales at one time, which they now build and sell to farmers across the U.S.

“These two improvements unleashed the potential for much higher productivity while at the same time forage quality kept improving,” Funke said.

Over the subsequent years, Funke has added equipment and boosted output. These days he can harvest over 300 acres per day as a result of an extended harvest-moisture window.

Prior to wrapping bales, Funke noted that 80 acres per day was about their maximum. Only one Krone baler equipped with a rotor-cutter is used. The system change has also allowed Funke to add forage acres; the farm now wraps 10,000 bales per year.

“Wrapping bales became a conscious management decision rather than a last resort option,” Funke said. “In 2016, our failure rate to put up high-quality dairy feed was around 1 percent. That’s phenomenal when you consider that previously it had been close to 80 percent in some years.”

Funke uses an Oxbo merger to combine 60 feet of swaths into a windrow. Baling at higher moistures contributes to greater leaf retention and overall better quality than was previously attained.

“With the wrapped bales, we can store them outside and don’t have to use tarps or buildings to preserve forage quality,” Funke noted. “This helps offset some of the wrapping costs.”

The key to effective bale wrapping is to exclude oxygen. To reach that end, Funke has found that eight layers of high-quality plastic film are needed for long-term storage. “Including the machine expenses, that adds about $20 per ton to harvesting costs,” Funke explained.

Funke emphasized the need to handle the bales carefully. “How high you pile them will depend a lot on the moisture,” Funke said. If you pile higher moisture bales too high, their shape will become distorted.”

In addition to the higher moisture baleage, which Funke likes to harvest at around 50 percent dry matter, he also harvests a lot of low-moisture wrapped bales. This is what he calls “sweet hay” and it’s very popular with his customers. Horse owners like it because there is no dustiness to the bales.

Sweet hay, which is generally harvested below 30 percent moisture, doesn’t ferment; for this reason, oxygen exclusion is critical. “The low-moisture wrapped hay also has the advantage of being cheaper to haul,” Funke noted.

The Iowa haymaker emphasized the need to make a dense bale to aid in fermentation when forage is baled between 40 and 60 percent moisture. Funke also mentioned that the dense bale made by the rotor-cutter baler maximizes wrapping and handling efficiency along with reducing his harvest costs as less plastic is used per harvested ton.

Currently, Funke uses two McHale wrappers to get bales wrapped as soon as possible once they are made. This minimizes bale heating before they are wrapped.

“Overall, we feel the cost of wrapping is more than offset by the quantity and quality of feed we are now able to produce. They also provide a storage cost advantage,” Funke concluded.

The perfect 2-for-1 Next