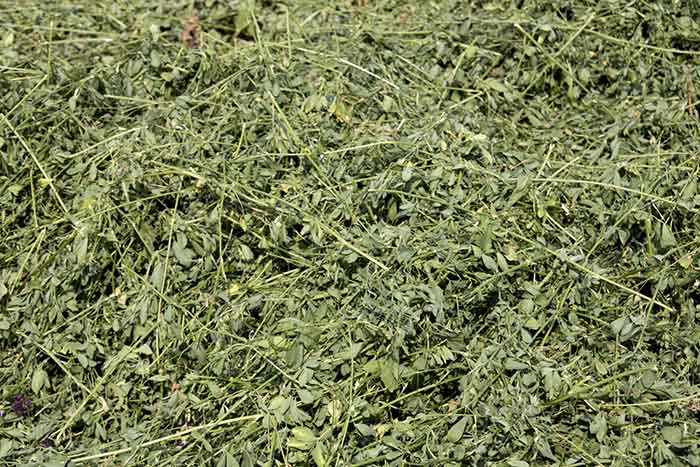 For the moment, let’s put harvest timing aside, though it plays a primary role in harvested forage quality. We’ll also leave alfalfa genetics on the sideline, reduced lignin or not.

Cutting to the chase, a primary goal of any alfalfa grower should be to harvest as many leaves as possible. The ones left on the ground after the baler or chopper exits the field become fertilizer, but they won’t translate into much milk or meat.

“Consider that alfalfa leaves have a relative forage quality (RFQ) of about 550 while stem RFQ is in the range of 70 to 80,” said Dan Undersander, extension forage specialist for the University of Wisconsin. “In a recent study comparing hay rake types, we found that leaf percentage accounted for 71 percent of the variation in forage quality,” he added.

At bud stage, standing alfalfa has about 45 to 50 percent leaves as a percent of total dry matter.

Undersander pointed to a study done by student interns for WinField United who measured leaf loss in several fields through the harvest process. Leaf percentage dropped about 2 percentage units during mowing and conditioning but dropped 13 percentage units after a chopped haylage harvest. Baling dried forage results in even higher leaf loss.

Although it’s impossible to harvest all of those leaves, keeping the loss to a minimum often is a difference maker between harvesting exceptional and good-quality, or good- and fair-quality forage. Undersander suggested that growers consider the following to save leaves and get more milk or gain out of every pound of dry matter:

1. First, make sure you’re not losing leaves to fungal diseases before harvest begins. Varieties differ in their resistance to foliar diseases. In cool, wet environments, foliar fungicide might provide an economic benefit when applied at earlier growth stages, though the response has been shown to be variable.

3. Check the ground under the swaths or windrows following mowing and conditioning. There should be minimal leaf loss at this stage, though flail-type conditioners are prone to more leaf loss than roller types.

4. Every time forage is moved between cutting and harvest more leaf loss occurs; the wetter the forage, the less the leaf loss. Try to minimize the distance that hay is moved across the ground (rake to center rather than one side). Mergers result in less leaf loss than rakes.

5. During harvest, maximize windrow size to the capacity of the baler or chopper. Larger windrows result in less leaf loss at the pickup.

6. Bale at the proper moisture. Forage that is too dry will result in excessive leaf loss and poorer forage quality.

In summary, Undersander said that forage producers need to be sensitive to the concept of “harvesting leaves” rather than “harvesting hay.” In most cases, timing, swath manipulation, and machinery adjustments can go a long way in taking more leaves off the field.

Managing the yield and quality trade-off Next