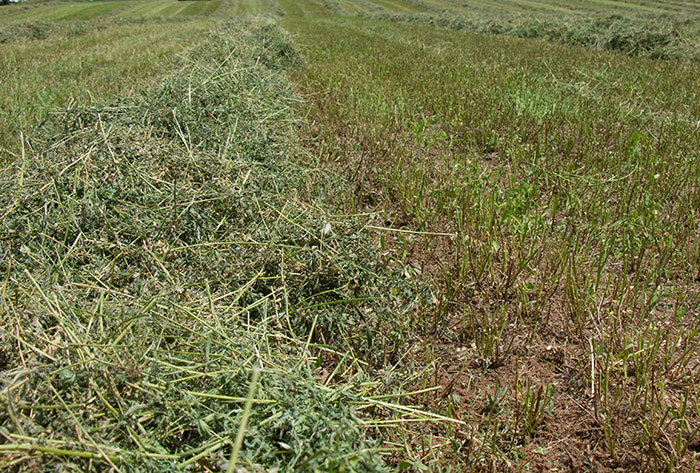 As the autumn days grind by, most of the alfalfa decision making is in the rearview mirror. However, there are two considerations that might still be on the proverbial table for some fields.

One of those decisions relates to a late-fall harvest when the temperatures reach the point that no further regrowth will occur. It’s what I’ve always referred to as “Halloween hay.”

The other decision, which actually needs to be made before temperatures drop too far, is whether or not to terminate a stand and how that is best accomplished.

Getting a good kill

Every alfalfa grower that I know would much rather make the decision on when to kill an alfalfa stand than have Mother Nature, weed pressure, or a disease make that decision for them. But irrespective of reason, all alfalfa stands will at some point come to the end of their useful economic life.

Though killing alfalfa in the spring is an option, fall is generally considered the preferred time to terminate alfalfa stands in much of the U.S. Some advantages to fall termination include:

• A more effective kill if glyphosate is used, though glyphosate alone often does not provide a complete kill of alfalfa.

• If 2,4-D or dicamba-based products are used, there is less risk of injury to neighboring fields or susceptible border plants compared to spring. Plant-back restrictions are also not an issue as they might be in the spring.

• Because regrowth is needed before the herbicide application, a fall kill doesn’t delay the planting date for the following crop as might occur in the spring. This often translates to additional yield for the subsequent crop.

• There is more time allowed for the alfalfa residue to decompose and perhaps earlier nitrogen availability for the subsequent crop.

If herbicides are being used to terminate a stand, as they often are, they need to be applied before a killing freeze and when there is sufficient alfalfa growth (generally 4 to 6 inches). Following a herbicide application, temperatures should ideally be above 50°F for a few days.

Often the combination of an herbicide application followed by tillage a week or more later provides the best control.

Herbicide selection will be dictated by the composition of the stand. Though growth-regulating herbicides such as 2,4-D and dicamba in combination are very effective for terminating alfalfa and perennial broadleaf weed such as dandelion, they won't kill perennial grass species. This is when glyphosate is typically added to the mixture.

As mentioned earlier, glyphosate alone often does not do an effective job of completely killing alfalfa. Of course, glyphosate will be totally ineffective on Roundup Ready alfalfa.

If tillage alone is used to terminate the alfalfa stand, it must be aggressive enough to sheer roots. Often aggressive tillage is not an option for highly erodible soils.

When you don’t want to kill a stand but need additional forage, sometimes a late-fall cutting is considered. This is a much different discussion than cutting alfalfa four to six weeks before alfalfa fields quit growing.

For a late-fall cutting, alfalfa plants have accumulated carbohydrate and protein reserves in the taproot through the fall, and it comes at a time when there is no risk of those reserves being depleted by regrowth. Research has historically shown that this approach is safer from a winter injury or kill standpoint than cutting earlier in the fall when regrowth is still possible.

The forage obtained from a late-fall cutting is typified by two characteristics: low yield and high quality. From an economic standpoint, it’s some of the most expensive forage harvested for the entire year. Even if the eyeball test tells you that there’s a lot of forage out there, it’s generally not the case.

One near certainty with taking a late-fall cutting is that the first-cutting yield next spring will be reduced.

Sometimes farmers are concerned that the fall growth will smother and kill the stand over winter. This simply does not happen with a legume such as alfalfa. Rather, leaves freeze and eventually drop off the plant. The old, fall aftermath growth (old stems) may impact forage quality in the next year’s first cutting, but if it’s harvested early enough the reduction in quality is minimal.

Taking an alfalfa cutting in the late fall always comes with inherent risk, but that risk may be enhanced if the field has already been stressed by intensive summer cutting, pest issues, or low soil fertility.

Considering all of the above factors, the need for feed prior to next year’s harvest season may be the only good reason to make Halloween hay.

Complement bermudagrass with alfalfa Next