They widened the baling window

By Laura Handke
The author is a freelance writer based in Atchison, Kan. 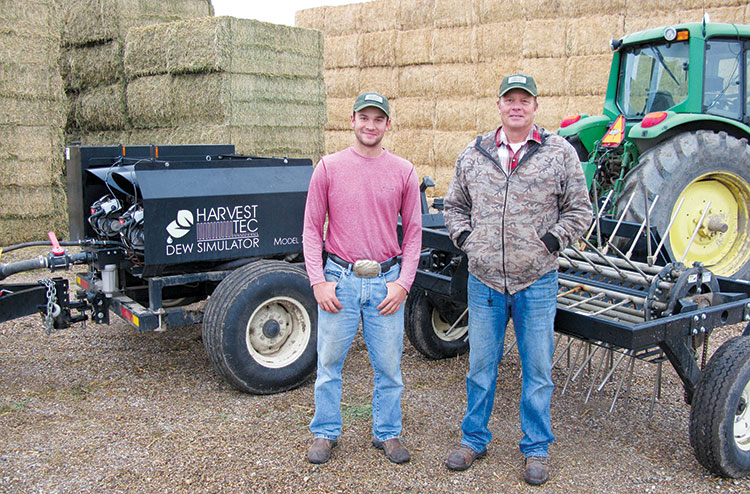 Forty-two miles east of Rapid City, in Pennington County South Dakota, the Lytle family is making their mark on the hay industry. They are harvesting their 1,000 acres of dryland and irrigated alfalfa to produce Supreme dairy-quality alfalfa for a single customer.

The ranch, which the Lytle’s have owned since 1974, is home to a purebred herd of Red Angus cattle and has been in the hay business nearly as long as they have owned their operation.

Seeing the value and opportunities added through the installation of irrigation, Rusty Lytle’s father, Joe, planted the operation’s first crop of irrigated alfalfa in 1978. In that same year, the senior Lytle also built relationships with four local dairies to sell cut and windrowed hay.

The family, which currently includes Rusty’s wife, Angela, and three sons, Zeb, Clancy, and Cale, has produced alfalfa every year since that initial field was seeded. They have seen changes and new technologies shape the industry along the way.

“They [the dairies] would bale and haul it off the field; they would run each load across the scale and pay based on weight,” Lytle said. “Now there is hardly a dairy left in western South Dakota.”

These days, an eastern South Dakota dairy serves as Lytle’s sole customer, taking every ton of hay the operation can produce.

“For the last seven years, one dairy has bought everything we put up; I work with them to provide a specific RFV (relative feed value), and their milk production has gone through the roof,” Lytle said.

The technology and innovations within the hay industry over the last two decades have been a game-changer in terms of promising and delivering those crucial components of dairy-quality hay — a protein and energy-rich feedstuff that allows dairy producers to pay premiums and, in turn, see their investment translate to additional pounds of milk.

Typically, Lytle and his family put up just over 7,000 bales of both dryland and irrigated alfalfa. This past season, the lowest hay RFV tested was 165 with a top end of 259; the lowest protein tested was 20 percent, peaking at 26 percent after the first cutting. Lytle attributes these numbers to advancements in the products and equipment available to today’s hay producers.

Start with the soil

As a long-time forage producer, Lytle knows the importance of testing soil and plant tissue in the production of dairy-quality hay. With a baseline set, he is able to monitor improvements for both plant and soil health.

Discussing the importance of plant and soil health, Lytle shared, “We have one pivot of alfalfa that’s nine years old and still has a plant population of 38 to 52 stems per square foot. We are cutting it three to four times every year and it’s still producing; it averaged 4.75 tons to the acre this year. We put a lot of stock in [seed] varieties, management, and soil microbial activity.”

Lytle attributes much of the quality gain their operation has seen to the products and equipment advancements that have allowed for faster and more efficient processing from swathing through baling.

“We usually operate in a 24 to 36-hour window from start to finish, and that window can really be a challenge to meet,” Lytle noted.

To maximize the time between fresh-cut hay that is too wet to windrow and bale and low-moisture hay that is too brittle to retain its leaves, Lytle uses technologies that allow for baling in less than optimal moisture ranges.

The Circle C conditioner on the swather crushes the entire length of the alfalfa stem, which reduces drying time. Lytle also uses propionic acid; this acts as a mold mitigation tool, allowing the crew to bale sooner in the curing process at somewhat higher moisture concentrations. The acid helps to ensure that when higher-moisture hay is baled, that between 18 and 22 percent, Supreme quality can still be attained.

During the 2018 season, Lytle implemented a new technology, which he says has added quality both to his family life and to the hay they produce.

Having experimented with adding water to windrows previously, Lytle was not a newcomer to the concept of extending the window of baling time by applying moisture. His son, Zeb, who holds a chemical engineering degree, was also a proponent of the process and jumped at the chance to operate the Harvest Tec Model 720 Dew Simulator the operation added to their equipment lineup this past harvest season.

“In our area, drying time is really fast,” Lytle noted. “Over the years, I have experimented with a sprayer; last summer we did a lot of that. I have been doing that [cold water application] for several years, but the hot mist created by this new implement really makes it work well,” he said.

Water is supplied by a 1,000-gallon tanker pulled behind the dew simulator to produce a hot mist. The initial heating of the water takes less than three minutes, making the startup relatively quick.

Once an operator determines where the moisture is needed in the windrow — top, bottom, middle, or throughout — trips can be set on the reel.

“The placement of the hot mist is an ongoing adjustment throughout the day, but it is easy to set and adjust, so it isn’t hard to do,” Lytle said. “The program they [Harvest Tec] use in their software box lets me put in my width and I have to guess my yield, which gives me a baseline for how much of the hot moisture to apply. Once we get started, we just watch the moisture monitor on the baler, and if it’s too much, we turn it down or if too little, we turn it up.”

The process has allowed the operation to bale all day, rather than having to shut down when the natural dew dries off. When temperatures reach 100°F and above, Lytle shared that Zeb applies more hot moisture, and the baler keeps rolling. Although quality integrity was an initial concern, hay tested in those fields with the highest hot mist application still were in the high 170-plus RFV range.

“This process has allowed us to put up large quantities of high-quality dairy hay; not only put it up, but we can put it up on our own schedule, without baling through the night,” Lytle said. “It is a lot less effort, and we put up a lot more hay.”

Their best day: 360 acres of Supreme dairy-quality hay, using two balers, on a schedule that the family determined, not Mother Nature.

This article appeared in the January 2019 issue of Hay & Forage Grower on pages 16 and 17.

Consider these factors when buying a round baler Next

Preserve quality with your mower Previous