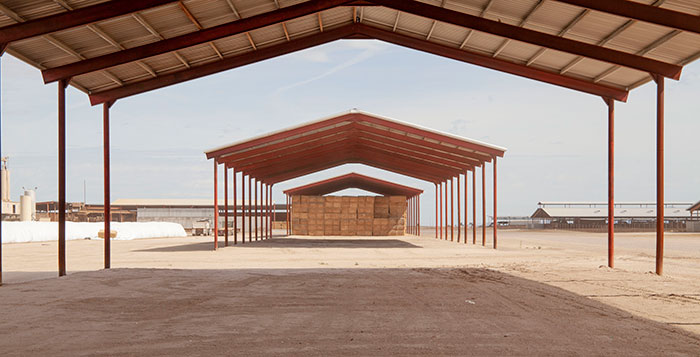 The dynamics of the hay industry have changed. Whether it can just be attributed to a natural cycle or a permanent new normal is yet to be determined.

One year ago, USDA reported that year-over-year May 1 hay stocks had declined by 36 percent, which amounted to 8.7 million tons. This past December, year-over-year hay stocks also dropped for the second year in a row.

Last week, USDA’s Crop Production report pegged May 1 dry hay stocks at 14.9 million tons, 3 percent (442,000 tons) below one year ago. That’s not the same drop in magnitude as last year, but it’s also not a rebound. Some of the largest hay-producing states had year-over-year May 1 stock reductions much greater than the U.S. average (see table below). Falling into this group were:

• Wisconsin, Michigan, and Ohio were each down 31 percent.

Not all states experienced inventory reductions. Some had large gains after experiencing severe reductions in May 2018 following less than desirable growing conditions the previous year.

Included in the states that had large year-over-year inventory boosts were: 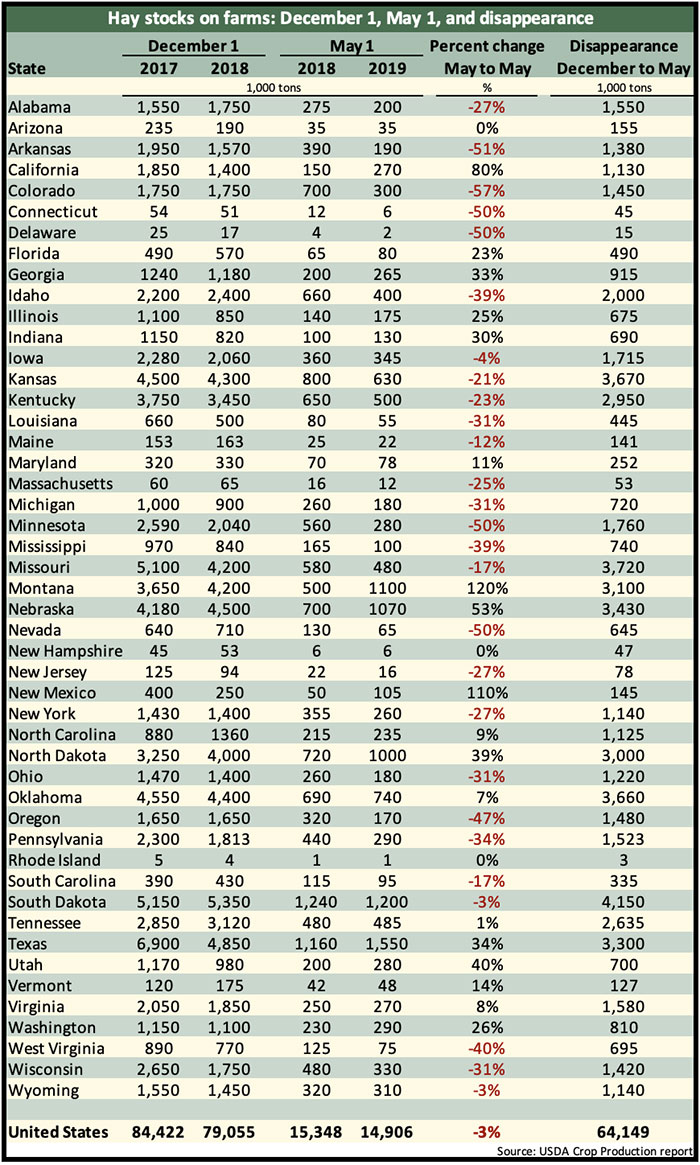 Looking at the disappearance graph, it’s clear that a new normal has developed in terms of hay that moves out of the barn from December to May. Since 2012, about 70 million tons or less is being fed during the winter. Previously, that figure was in the 80 to 85 million tons range. In other words, about 10 to 15 million fewer tons are being consumed from December through May and that’s been occurring for the past eight years.

So, what has changed?

Recall that both the 2011 and 2012 years were characterized by severe drought, with the latter being nearly nationwide. This caused hay inventories to deteriorate and prices to soar toward record levels.

Between 2009 and 2014, beef cow numbers declined by about 3 million head. We might point to that as a reason for the reduction in winter hay feeding except that since 2014 the beef cow herd has rebounded to 31.8 million, a number similar to one we had in 2009.

The nation’s dairy cow herd has actually expanded slightly since the turn of the century (until very recently). Essentially, it’s very hard to pin the trend for reduced winter hay feeding on a reduction in beef or dairy cow numbers.

There has been a significant decline in U.S. hay production in the past 20 years. From 2000 to 2010, the average annual dry hay production was 150.2 million tons. Since 2011, hay production has averaged 130.3 million tons per year. Hay prices during this time have remained relatively strong except for 2016, which followed a couple of good overall production years.

It’s probably safe to assume that many beef producers are figuring out ways to feed less dry hay to get them through winter. More and more, we’re seeing annual forages grazed into December or later. Also, it has been well documented that dairies in the West are feeding less alfalfa hay in their cow rations year-round.

Dairies outside of the West have largely relied on haylage as their preferred feed source. None of this tonnage is included in the disappearance figure but the trend for feeding chopped, high-moisture feed hasn’t changed dramatically for a number of years.

What has changed in the past 10 years is the conversion by many dry-hay producers to baleage. This directly impacts hay production and inventory figures but there is no data to document exactly what percentage of production has been recently converted from dry hay to baleage.

Whatever the reasons, USDA data is telling us that we’re producing and feeding less dry hay; both trends began in 2011, and whether this situation is cyclic or the new normal remains to be seen.

Rain is disrupting alfalfa production Next