A passion for farming and ryegrass baleage 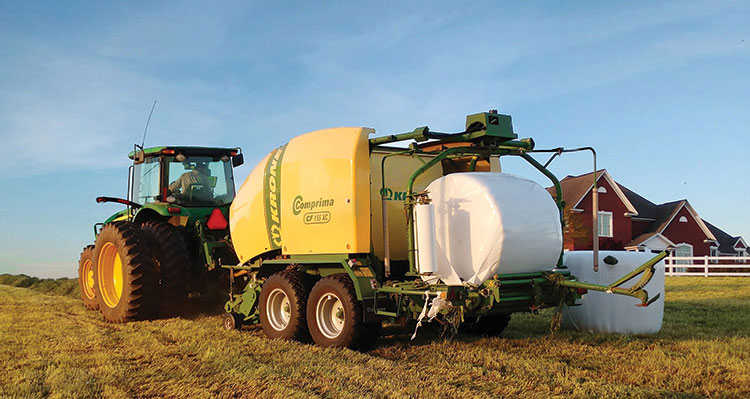 About 70 miles due south of Atlanta, Ga., and just east of Thomaston, lives one of the 2019 Top 10 finalists for the National Outstanding Young Farmers Program. He’s not a fourth-generation farmer. Third? Nope. Second? Wrong again.

“I like to say we’re two generations working on the first generation,” said Marcus South about the current operation that didn’t really exist before 2001. It was then that Marcus and father, Anthony, became cattlemen.

“I grew up on five acres until I married my wife, Neely. We had a few cows and I just started falling in love with farm life. My dad and I started with 35 brood cows and 175 acres; it just became a passion to raise cattle.”

That passion for cattle would eventually parlay into an equal intensity to produce high-quality forage — a rare trait among beef producers who put up hay.

These days, SSS Farms consists of 600 acres, about 250 mother cows, and 14 chicken houses. The expansion took place over a period of years. “Once we got done building and buying, that’s when baleage came into the picture,” said South, who oversees the forage program and poultry houses while his father heads up the cattle enterprise. In 2017, the duo was named Georgia Cattle Producer of the Year with a herd of mostly Angus-Hereford crosses. 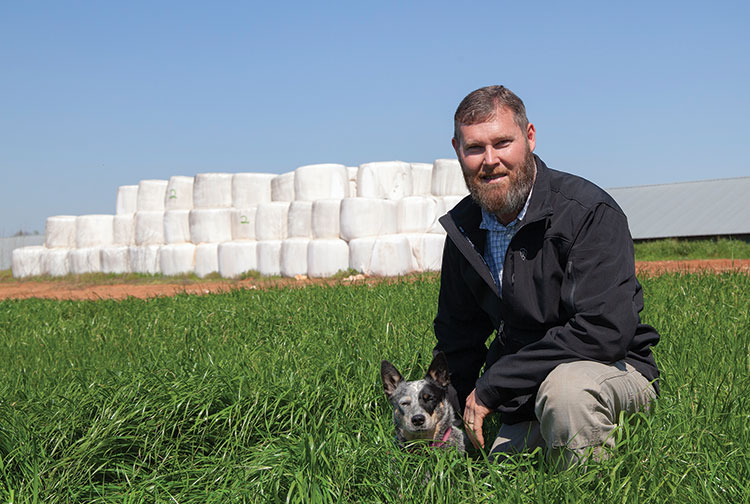 Marcus South with his two constant companions –ryegrass and Bella, a Blue Heeler.

The Souths had done some in-line wrapping of bales one year and noted how well the cows ate the baleage. The SSS herd begins calving in November and finishes in February. This means high-quality forage is needed through the winter when cows are in early lactation and preparing for the next breeding season.

Several years ago, when it came time to replace their old baler, Marcus decided on the purchase of a Krone Comprima baler, which features on-the-go bale wrapping.

“We like to do things ourselves,” South explained. “I didn’t have the manpower for tube wrapping. The current baler allows us to get the bales wrapped immediately and I don’t have to hire more labor.”

Given a choice, South wouldn’t make hay any other way, and labor savings is just one of the many advantages that he cites for his baleage system. “Both our weaning weights and conception rates immediately jumped when we started feeding baleage because we just got better quality forage. The cows hold their weight and we have very little feed waste, 5 percent or less from what I can tell,” he surmised.

Another important advantage that South has experienced is that he can often get an extra cutting with baleage compared to those in the area who are making dry hay. “I understand that the upfront expense is more, but long term it’s going to pay you back,” South said. “I’m trying to get more production on a fixed amount of land. That extra cutting means a lot,” he added.

Bales are moved off the field using a flatbed trailer and bale squeeze. This generally occurs the day after baling, before the bales “settle.”

It’s not that South doesn’t feed dry hay. He still makes about 400 bermudagrass bales for dry cows to complement the 900 to 1,200 bales of ryegrass baleage that is harvested each year. 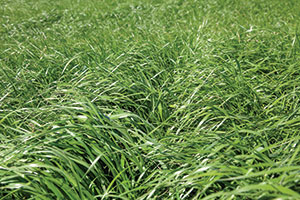 Marshall ryegrass is seeded in the fall into existing bermudagrass pasture
“Dairy guys have to focus on quality forage, but I think too many beef producers tend to overlook that aspect,” South commented. “Baleage forces you to concentrate on forage quality. If you wrap bad feed, you’re going to have bad feed when it’s unwrapped.”

South backs up his philosophy with results. He recently placed first in the Mid-Georgia Baleage Contest. Most of the baleage is made from Marshall ryegrass that has been testing 17 to 18 percent crude protein and 185 to 205 relative forage quality (RFQ).

“I was doing ryegrass and clover, but I’m trying to get some weeds under control, so now it’s just straight ryegrass, South said. “It seems to provide more than enough quality on its own.”

To up his quality game during the hot, summer months, South recently sprigged some Tifton 85 bermudagrass that he plans to harvest as baleage.

The Marshall ryegrass is seeded in the fall into existing bermudagrass stands. It stays productive through early summer. South will sometimes put in sorghum-sudangrass or millet after the ryegrass plays out. He will then make baleage out of that, but he noted that the RFQ is not nearly as high as the ryegrass. He’s still searching for the perfect summer grass to make baleage from and hopes that Tifton 85 might be a solution.

South, who is always seeking
to fix the weak link, may begin looking for a ryegrass variety that will end its growth earlier in the year. He’s concerned that Marshall is starting to thin some of his permanent bermudagrass pastures.

Forage fertilization and adequate water also play a large role in South’s forage quality program. “With the poultry, we have a ready source of fertilizer, and we have a centrally located lake that provides our irrigation water,” he noted. “Two years ago, we put in a couple of irrigation pivots that constitute a great insurance policy for both our pastures and hayfields.”

The majority of the chicken litter that is generated is used on the home farm.

South feels it’s important to be involved in the agricultural community and communicate with those outside of agriculture. He currently serves as president of his county’s Farm Bureau, which affords him the opportunity to speak to service and other community groups.

The relatively young South didn’t attend an agricultural college following high school but does have an insatiable thirst for knowledge and information. “I try to talk to a lot people before making a decision,” he said. The first-generation farmer also routinely attends programs that are offered by the University of Georgia Extension Service where, South said, “You can always pick something up that is useful.”

Though he learns from others, South is also quick to point out: “I’ve always tried not to have a ‘This is the way it’s always been done’ mentality.” Aware that there are always components of his production system that can be improved, South shows no signs of losing his passion for farming . . . and succeeding with high-quality baleage.

This article appeared in the August/September 2019 issue of Hay & Forage Grower on pages 20 and 21.

Hoosier hay from the land of grain Next

Past, present, and future – all in one Previous