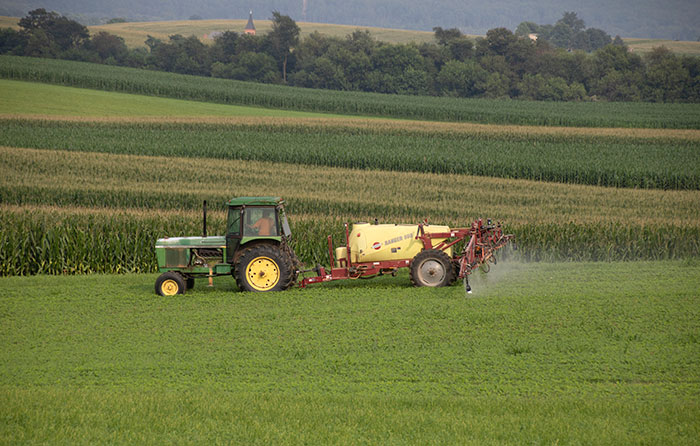 After working and agonizing to keep alfalfa stands productive for multiple years, producers know the time will come when all fields must be terminated in a Rambo-like manner. The term “perennial” only goes so far in the alfalfa production world.

Perhaps it’s low productivity, maybe it’s weed encroachment, or it could be a planned rotation adjustment, but no alfalfa stand lives forever, at least not productive ones.

Though spring always remains an option, fall is generally considered the preferred time to terminate alfalfa stands. A 2012 survey of 421 Minnesota alfalfa growers indicated that two-thirds of that group terminated alfalfa in the fall. Some advantages to fall termination include:

1. Glyphosate is more effective when used in the fall, and plant translocation is toward the roots. However, glyphosate alone often does not provide a complete kill of alfalfa, even in the fall.

2. If 2,4-D or dicamba-based products are used, there’s less risk of injury to neighboring fields or susceptible border plants compared to spring. Plant-back restrictions are also not an issue as they sometimes are in the spring. Many 2,4-D labels require seven to 14 days between herbicide application and planting. Dicamba may range from zero to 30 days.

3. A fall kill provides an earlier planting date for the subsequent crop. This generally translates to additional yield.

4. When killed in the fall, there’s more time for the alfalfa residue to decompose.

5. Although the total amount of nitrogen credit doesn’t vary significantly whether alfalfa is spring- or fall-killed, nitrogen availability to the following crop might be earlier if alfalfa is terminated in the fall.

If an inadequate kill occurs, spring offers a second chance option. When tillage alone is used to terminate the alfalfa stand, it must be aggressive enough to sheer roots. Rarely does tillage kill more than 80 percent of the existing alfalfa plants. In some cases, aggressive tillage is not an option for highly erodible soils.

In the fall, herbicides need to be applied before a killing freeze and when there is sufficient alfalfa growth (generally 4 to 6 inches). Ideally, temperatures for a few days following the application should be above 50°F.

The combination of an herbicide application followed by tillage a week or more later generally provides the best control, but there is value to leaving the plant residue on the field over winter.

Herbicide selection will be dictated by the composition of the stand. Though growth-regulating herbicides such as 2,4-D and dicamba in combination are very effective for terminating alfalfa, they won't kill perennial grass species. This is when glyphosate is often added to the mixture.

As mentioned earlier, glyphosate alone often does not do an effective job of completely killing alfalfa. Of course, glyphosate will be totally ineffective on Roundup Ready alfalfa varieties.

Don’t discount the advantage that fall-killed alfalfa has for the allowance of earlier corn planting the next spring. This is perhaps the most important economic reason to terminate alfalfa fields before long underwear becomes fashionable.

Checking in on those new alfalfa seedings Next

Yield trends for the King and Queen of forages Previous