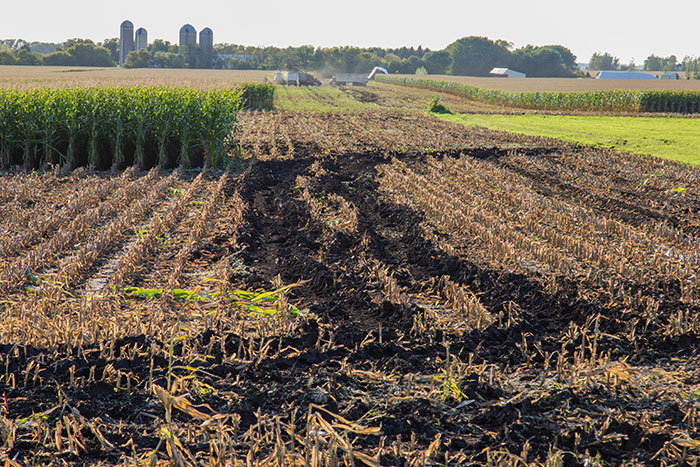 That being the case, harvest is sometimes accomplished at the expense of driving on wet soils. This is done knowing that there’s a high risk of rutting fields and creating soil compaction. It happened a lot in 2019, as evidenced by many corn silage fields.

According to Francisco Arriaga, an extension soils specialist with the University of Wisconsin, the level of compaction and rutting that can be created depends on multiple factors such as the number of passes done, equipment axle loads, the type of tires (flotation, duals, or tracks), and soil type and structure.

“Tillage is often needed to fix subsoil compaction and rutting; however, doing tillage when soils are wet will make matters worse,” Arriaga cautions in a recent issue of the Wisconsin Crop Manager newsletter.

The soils specialist offers the following advice for dealing with the wet fall soil conditions that have plagued many parts of the Midwest and East:

1. The relative depth of compaction that can be created in wet soils depends on the level of soil wetness at the time the soil is trafficked. Soils trafficked when soil moisture is around or wetter than field capacity have a greater risk for rutting than creating subsurface compaction (deeper than 6 inches).

3. Doing tillage in spots to fill deep ruts is a good approach rather than doing heavy tillage over an entire field. Deep ruts might take two to three tillage passes to get them filled in.

4. If soil conditions are still too wet after harvest to fix ruts or compaction issues, wait until soils dry out before doing additional tillage. It may mean delaying tillage until late fall or even next spring. Tilling wet soils will create more issues as it leads to additional aggregate breakdown and hardening of the soil. Avoid making clods.

5. Clay smearing is more likely to happen when tilling wet soils. Soils with smeared clay will have a reduced infiltration capacity and can create issues for seed germination.

Arriaga notes that there is limited research on tilling frosted soils, and results have been mixed. The biggest factor is the amount and depth of frost present in the soil.

“Frost can help carry some of the equipment load, but as soil frost intensifies, the amount of horsepower needed for the tillage operation goes up, too,” Arriaga notes.

Looking ahead, the soils specialist suggests enhancing soil aggregation as a good long-term strategy for improving the trafficability of fields. He says that timely manure applications, using cover crops, and implementing reduced tillage practices (including no-tillage) are all good strategies for increasing soil aggregation.

We harvested a lot of dirt this year Next