By John Goeser
The author is the director of nutrition research and innovation with Rock River Lab Inc., and adjunct assistant professor, University of Wisconsin-Madison’s Dairy Science Department. 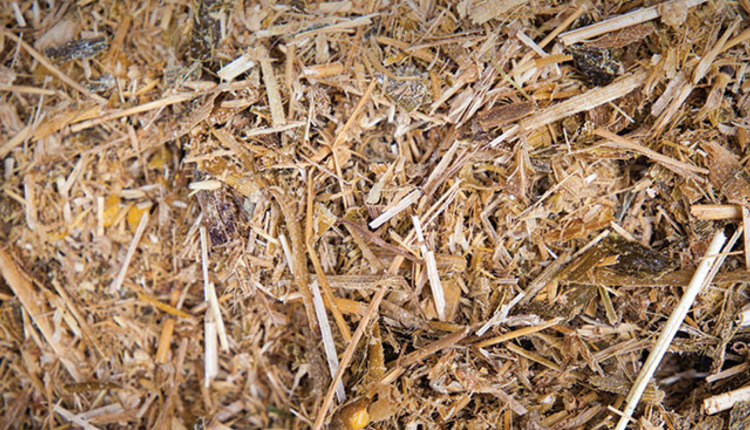 The 2019 growing and harvest season experience for many farmers was like entering a boxing ring, with one (or two) hands tied behind your back. From a swamp-like spring planting season to a drawn out and frigid harvest, last year was tough on growers.

In recent articles, we’ve discussed lessons learned after gaining experience with alternative forages and managing that which we can control. Through the challenging year and with the harvest season now behind us, there appears to be several less recognized or unanticipated bright spots in many silos across the U.S.

When the growing environment changes substantially, a genotype by environment interaction (GxE) becomes evident. The resulting phenotypic outcome (yield and quality) can be either positive or negative. Plant breeders and agronomists study this effect so as to place the genetics in the best possible environmental conditions to succeed. For example, some hybrid lines are far more drought tolerant than others and perform much better than average under water deficit conditions.

With dairy and feedlot feeding studies, we often overlook GxE interactions. Researchers plant the treatment varieties or hybrids without replication (for example, a hybrid planted in just one field compared against a hybrid planted in an adjacent field) and then research the quality impact on performance in replicated animal experiments. Keep this in mind when interpreting results for new genetics, as the animal performance outcome may be very different under dissimilar growing conditions due to the GxE impact.

This GxE interaction can be better addressed by animal nutrition researchers in the future; however, farmers have long recognized the impact that growing season has upon quality. Some crops feed better in certain years than others.

As our Rock River Laboratory’s 2019 forage database begins to take shape, it appears that this year seems to be trending toward a positive GxE interaction for many corn silages. However, antinutritional factors such as higher ash content in hay and haylage, mold, wild yeast, bacteria, and mycotoxin loads are also at play, which may detract from the enhanced nutritional quality.

Prior to discussing the potential bright spots, recognize that the 2019 hay and haylage crops appear to have taken a hit in quality. Midwestern and Eastern haylage crude protein values trended markedly lower in 2019 relative to the prior two growing seasons (see Figure 1). 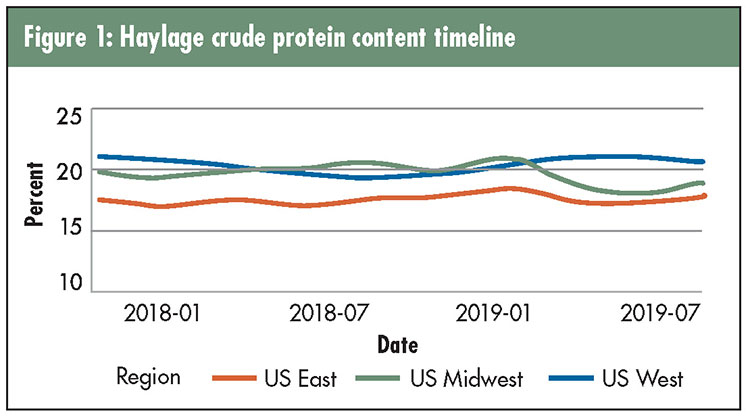 A less recognized factor with many 2019 haylage crops is an elevated ash content. The western U.S. typically experiences greater ash content in forage crops, however, there appears to be convergence for the Midwest and western U.S. in 2019 (see Figure 2). 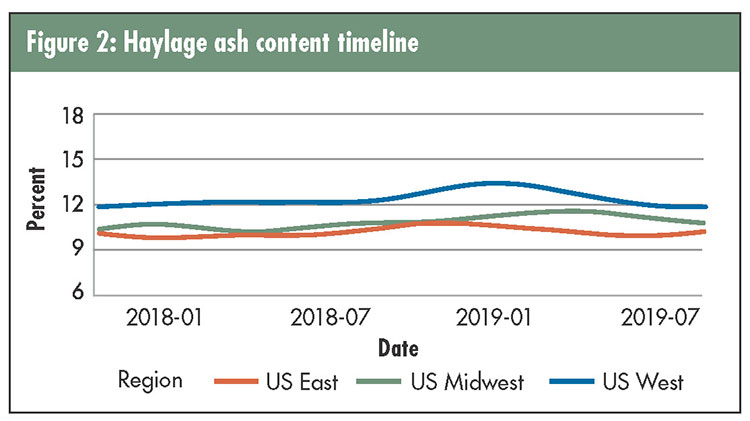 The higher ash content is likely coming from rain splashing soil up onto plants, flooding in some areas, and the need for more raking, tedding, or merging to wilt the laying crop to an appropriate moisture concentration. This will detract from feed energy values but also contribute toward feed hygienic issues such as mold, yeast, or bacteria growth potential. Check your hay or haylage ash levels and discuss potential ramifications with your nutritionist. 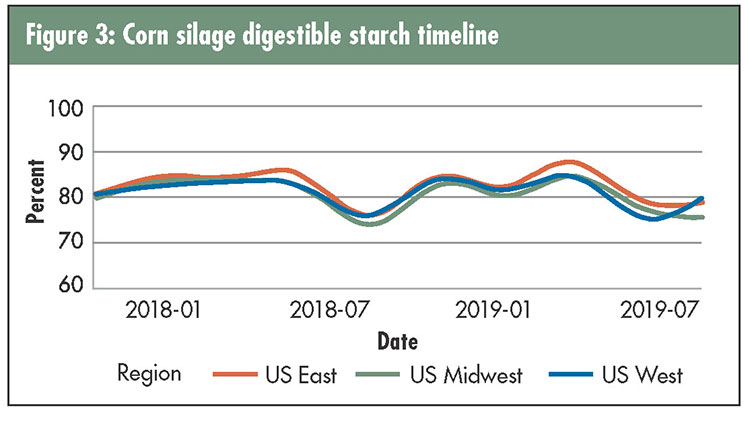 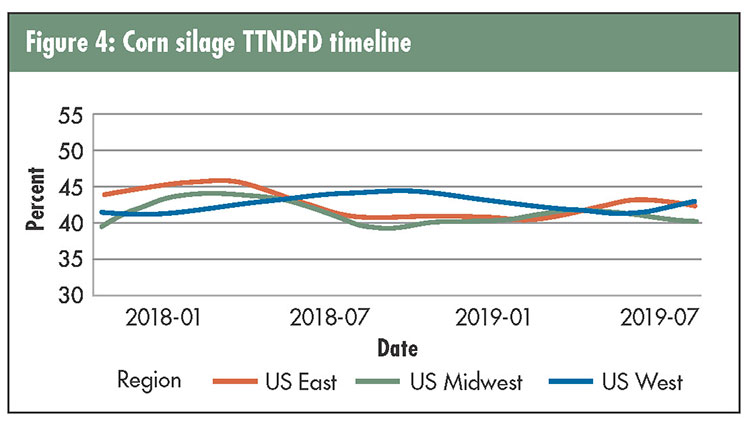 The TTNDFD model incorporates a measure of both lignified fiber (undigestible NDF at 240 hours; uNDF240) and fiber digestion rate. One or both of these may have been impacted by the growing season. The average TTNDFD impact appears to be on the order of 2 to 4 percentage units, enough for a pound or two of milk production potential per cow.

While 2019 was a forgettable growing season for many, there appears to be a few hidden bright spots in the resulting forage. Your yields may not have been ideal; however, consult with your nutritionist on the fiber and starch digestion potential of your corn silage. There may be considerably more energy and milk per ton in this season’s forage for your herd.

This article appeared in the January 2020 issue of Hay & Forage Grower on pages 28 and 29.

A front row view of dairying in Kenya Previous