Of mice and toxic fescue 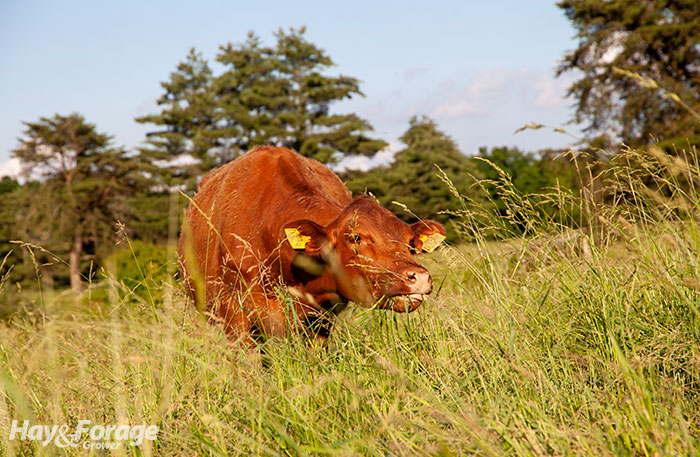 Pick a cow . . . any cow. How tolerant is she to fescue toxicosis? The truth is: We don’t always know. But how great would it be if we did?

I’m convinced that someday we will select bulls and cows with a high degree of reliability that they will be top performers on toxic tall fescue. Of course, I’m also pretty sure that when this occurs, I will be up close and personal with the soil biology that supports fescue growth. Rome wasn’t built in a day and neither are toxic fescue-resistant cows.

Let’s shift our attention from cows to mice for a moment. Mice don’t exactly reside at the top of the food chain; in fact, they tend to linger toward the bottom.

Although mice are generally nuisance creatures, they are useful for science experiments because they reproduce quickly, are prolific, and don’t take up much space. For example, we can thank mice, in part, for helping to determine the toxicity level of various pesticides. After all, it’s difficult to get people to volunteer for this type of work.

In 1997, researchers at Virginia Tech University decided to run an experiment whereby mice were fed infected (toxic) tall fescue seed. They were then sorted for resistance or susceptibility to the toxin based on growth rate.

The next generation progeny of the resistant lines had improved average daily gains compared to those of the susceptible mice when each group was fed infected seed. There were also differences in liver enzyme activity. In subsequent studies, reproductive performance in the lines of resistant mice was found to be superior to the susceptible line.

It’s almost assured that a similar experiment, done with cattle, would yield the same results. If we accept this premise, then we can also come to two further conclusions:

1. The ability to resist or tolerate toxic fescue is heritable from one generation to the next.

2. Differences for this “trait” exist within a population. It is therefore possible to select and breed for improvement.

The laundry list of maladies imposed by toxic fescue are well known. To summarize, these are “poor doing” cattle or herds hampered by reduced gains and growth, low milk production, heat stress, and poor reproductive performance. Blood vessel constriction can result in the loss of ears and hooves.

If Fescue Belt producers are on top of their game, the worst-performing cattle will be culled. As such, I think it’s safe to assume that selection for those cattle most resistant to fescue toxicosis has taken place whether we call it that or not. This has been going on for generations.

If we accept this premise, then today’s Fescue Belt herd is more tolerant of the endophyte toxin than it was 20 years ago.

Although this blind selection process has inadvertently occurred over the years, it’s clearly not been enough.

Scientists have also taken the approach of finding breeds or traits that might have a reasonable correlation with fescue toxicosis tolerance. Scott Greiner, an extension animal scientist with Virginia Tech University, highlighted a couple of these efforts at last month’s American Forage and Grassland Annual Conference.

Greiner pointed out that the bulk of breed studies indicate that Bos indicus breeds are less impacted by fescue toxicosis because of their inherent ability to tolerate heat better than Bos taurus breeds. Of course, this is of little consequence to the Angus breeder.

Researchers in North Carolina and Mississippi have looked at the timing of cow hair coat shedding in the spring and its association with calf weaning weights and body condition scores. They found that the Angus cows that shed all or most of their winter hair by June 1 weaned calves that were about 24 pounds heavier than those cows that retained hair after June 1. Hair coat shedding was found to be moderately heritable.

In the future, the so-called “slick hair” gene might hold promise as a trait that could enhance fescue toxicosis tolerance. Researchers have identified the slick hair gene in Senepol cattle and have developed, through gene editing, a Red Angus heifer that has the same gene mutation. Consumer acceptance of this method of improvement is still in question.

Scientists are finding genes associated with certain hormones and cell-signaling proteins that have an effect on the animal’s susceptibility or tolerance to fescue toxicosis. In the future, this type of information could be used as so-called biomarkers.

Although the future likely holds a definitive means of identifying cattle with resistance or tolerance to fescue toxicosis, we’re not there yet. Other than hair coat, there is no easily distinguishable phenotypic trait that can be used. Genomics or biomarkers hold some promise, but they’re still not in a place of wide adaptation.

Be an intentional pasture manager Next

A pathway to ranch Previous