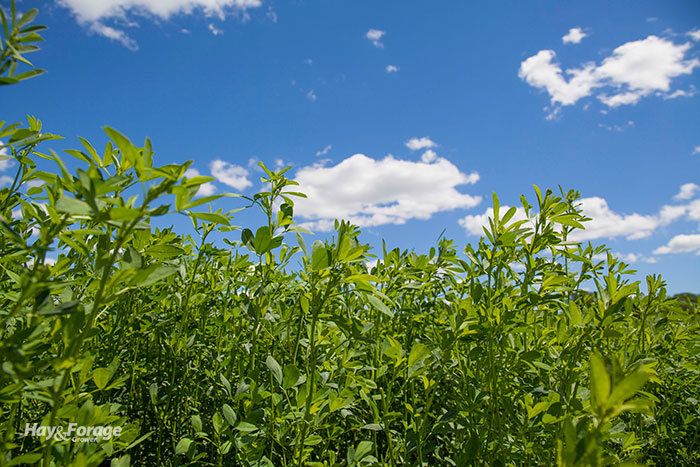 Craig Sheaffer has worked with alfalfa his entire academic career. The University of Minnesota researcher can reel off a bevy of advantages that alfalfa adds to a farm’s cropping and feeding systems.

At the Midwest Forage Association Symposium last week, Sheaffer was given the unenviable task of discussing the long-held belief that alfalfa yields have flatlined and offer reasons for why that trend has occurred, if it really has.

In viewing USDA survey data, Sheaffer pointed out that corn silage yields have risen dramatically faster over the years than alfalfa. He noted that these data are averages and include all management levels of alfalfa growers. They also include all harvested stands regardless of age. 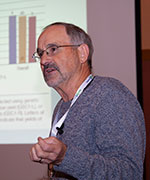 “I think we have to realize that we’re not going to get corn silage yields from alfalfa,” Sheaffer said. “Alfalfa has a large crown to help it overwinter, a deep tap root system, and biological nitrogen fixation. These all require energy to maintain. You can’t turn alfalfa into an annual corn plant. Are we willing to give up perenniality for more yield?” he asked.

Sheaffer also pointed out that alfalfa has some breeding challenges not inherent to corn. “Alfalfa is cross pollinated, and all of our varieties are really populations of individual plants. It’s not like a cornfield where every plant is the same.”

Despite the challenges, the Minnesota professor pointed out that there have been many successes in alfalfa plant breeding. These include a number of defensive and adaptive traits, improved nutritional value, herbicide resistance, and non-nitrogen fixing traits, if you want it.

“I’ll even add yield to the successes,” Sheaffer said. “In my opinion, we actually do have more genetic yield potential than what we see in all of that flatlined USDA data. I certainly have seen that in my research plots over the years.”

Sheaffer noted that we can argue whether or not alfalfa yield progress is too slow, but there is no arguing the point that resources for improving alfalfa yields pale in comparison to corn.

“I recently asked someone how many corn breeders we have in Minnesota,” Sheaffer said. “His answer was about 12. I don’t think there are 12 alfalfa breeders in the entire U.S. What we need to do is make a significant investment into alfalfa breeding.”

Some advice for growers

Shaeffer specifically addressed the alfalfa growers in the audience and noted that they simply can’t do anything about this idea that alfalfa yields have flatlined based on historical USDA data. As such, he encouraged them to put more emphasis on their own situation for trying to improve yields.

“Field variability, harvesting losses, stand age, cutting time decisions, and soil fertility are all factors that impact on-farm yields,” Sheaffer said. “Similar to Liebig’s Law of the Minimum, the yield from a particular farm will always be no greater than the factor that is most limiting.”

“We may have to put as much effort into variable rate technology as the row crop farmers do,” Sheaffer said. “We especially have to mindful of soil pH, which can significantly reduce yields if it is too low.”

Sheaffer also mentioned wheel traffic as a factor that is reducing harvested yield potential. He noted some recent Wisconsin research where a single pass over cut alfalfa reduced yield by 14% at the next harvest. Three passes knocked the yield down an additional 9%. That equated to a decline from 7.5 tons per acre to 5.8 tons per acre in the wheel track.

“I think we have improved alfalfa yield potential through the years but probably not by a lot,” Sheaffer concluded. “We need to recognize that alfalfa is not the same as corn silage, and there are plant morphological factors restricting progress. Producers always need to be looking for that most limiting factor on their own farms. Perhaps that’s the way we can make the most immediate advancement.”

Appraising forages with dollars and sense Next