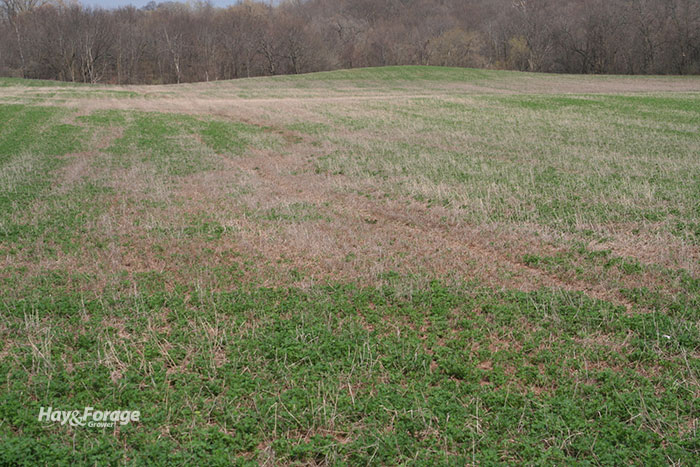 While alfalfa fields in the South are being cut, some for a second time, those in the North are just waking from winter slumber . . . or at least we hope they are.

The hope is that a combination of favorable weather and thoughtful previous decisions will have fields carpeted with green plants that strongly resemble alfalfa; in other words, a keeper.

Not welcomed is a field of brown, or something close to it. Fortunately, this doesn’t happen often and not nearly as was once the case. When it does, the decision of what’s to follow is painful, but an easy one to make — time to issue last rites and put this field out of its (and your) misery and plant something else.

Of course, there is also another option between dead and alive; it’s that of the marginal alfalfa stand — a perhaps better outcome than the brown field but certainly the most agonizing from a decision-making standpoint. These are the fields that have been uniformly thinned or have areas of dead plants and other areas of productive plants.

1. Keep the field for the duration of the season and accept the reduced yield.

2. Take just the first cutting and then plant a short-season corn hybrid for silage.

3. Terminate the field early and plant a full-season silage corn.

4. Interseed the field with a nonalfalfa species such as red clover, ryegrass, or some other cool-season grass.

By plowing and planting corn for silage early, you give up all alfalfa production on the field for the current year but do your best to ensure maximum silage yields from early planting and using a full-season hybrid. This still may not seem too appealing if you really need the alfalfa in the short run or if it’s a relatively new stand, and you want to capture more return on the establishment investment.

By waiting to take the first cutting before planting corn, you get some alfalfa production to fill a short-term need; however, this is done at the expense of a reduced corn silage yield. If corn planting doesn’t occur until June, the yield reduction often ranges from 40% to 60% of an early planted, full-season hybrid. Receiving adequate moisture and controlling weeds after the corn is planted are the keys to success.

Interseeding other forage species into a marginal alfalfa stand is a strategy that has been done with regularity for many years. As most alfalfa growers know, autotoxicity makes it nearly impossible to successfully seed alfalfa back into alfalfa.

When considering an interseeding option, a decision has to be made if you want fast or permanent forage. In the latter case, a cool-season grass such as orchardgrass or tall/meadow fescue works well. Of course, additional forage yield won’t be realized until later in the growing season at the earliest.

The perennial forage option is a good one for younger alfalfa stands where you want to extend the life of a currently marginal alfalfa stand. Some producers do this on a routine basis after two or three years, even when alfalfa winterkill isn’t an issue. Another biennial option is to use red clover, but realize it is slow to dry if you plan to bale dry hay.

For fast forage that is high quality, annual or Italian ryegrass is pretty hard to beat. It is easily interseeded, grows rapidly, and provides season-long forage production. As a one-year fix, ryegrass checks all the boxes.

The right thing to do varies with each year and each farm situation. The problem is that the best choice is almost always dependent on future weather conditions that can never be predicted at the time of the decision.

If you’re looking at one of the corn silage options, assessing alfalfa growth as of late April or early May is the key. If growth is well behind normal, you can be pretty sure corn won’t get planted until after the first week in June. At that point, corn yields are significantly reduced and may make waiting less desirable. Conversely, if growth is well ahead of normal, the odds of planting corn before June 1 improve.

For any of the cool-season grass options, interseed with a no-till drill as soon as soil conditions allow.

Don’t skimp on alfalfa quality Next