Get a handle on hay protein 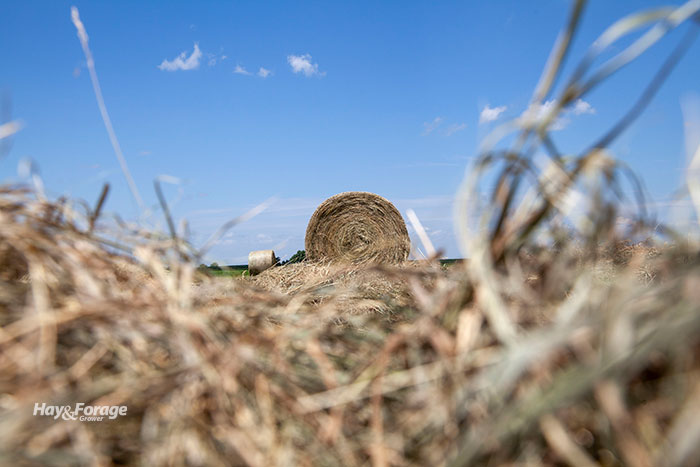 Hay bales are a lot like snowflakes in that no two are exactly alike, but it’s a lot more important to know the differences between hay bales than snowflakes.

Hannah Greenwell, an extension educator in north central Nebraska, emphasizes that there is a big difference between hay that is 9% crude protein (CP) and hay that is 7% CP even though it may not seem important at first glance.

She offers up this example:

A 1,300-pound spring-calving cow in the second trimester (fall or early winter) requires 1.6 pounds of CP as a portion of her daily dry matter intake. If the hay is 9% CP, divide 1.6 pounds of required CP by 0.09 to determine the cow would need to consume about 18 pounds of dry matter (DM) hay per day to meet her protein requirement.

By contrast, if the hay was 7% CP, the same cow would need to consume about 23 pounds of hay to meet her protein needs. That 5-pound per day difference in consumption equates to 500 additional DM pounds (568 pounds of as-fed at 12% moisture) of hay per day for every 100 cows in the herd.

So, the difference between 9% CP and 7% CP hay is not just 2%; the more practical answer is that a lot more hay will be needed to feed the cow herd over the course of a winter.

A more dire circumstance is if your hay tests 5% CP on a DM basis. In this case, a cow would need to consume 32 pounds of DM hay to meet her 1.6-pound CP requirement. Greenwell notes that the digestibility of such hay would likely make such an intake level highly unlikely. Rather, a supplementation strategy would be needed to meet a cow’s CP requirement. 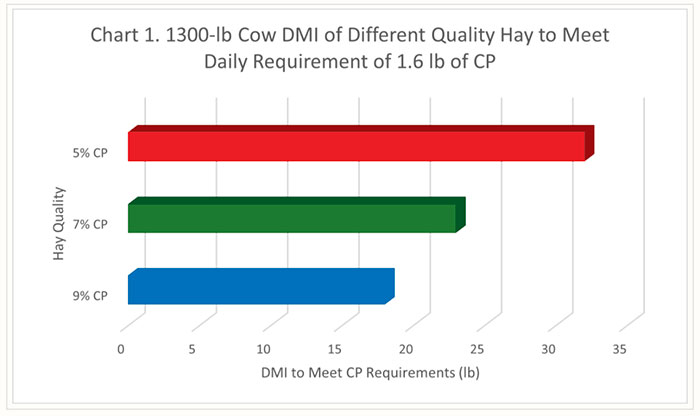 The moral of this story is two-fold. First, get your hay tested so you know how much will be needed to meet your herd’s nutrient demands. Second, forage quality pays.

Bale grazing tips from north of the border Next

Forage Poll: What is your primary means of selecting an alfalfa variety? Previous