Take stock to the stalks 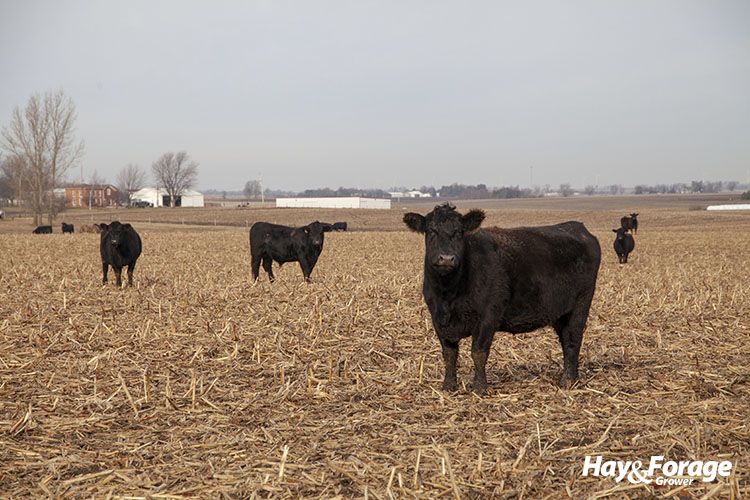 This is the time of year when farmers like to put their perennial pastures out to pasture . . . so to speak . . . and let their cattle consume cornstalks, although the stalks are generally not what get devoured.
It might seem that grazing corn residue is pretty straightforward, but the reality is that a high level of management is needed to maintain cattle performance and be good stewards of the land.
In a University of Nebraska (UN) beef cattle extension webinar last week, Mary Drewnoski, a UN beef systems specialist, addressed three common questions that producers propose to her regarding their corn residue grazing systems. Those questions are:
How do I determine the stocking rate?
How long should cattle be left on a field before moving?
When is feed supplementation needed?
Know your cows
Spring-calving cows in mid-gestation have relatively low nutrient requirements. “These cows only require about 11.5 to 12 pounds of total digestible nutrients (TDN) and 1.6 pounds of crude protein (CP) per day,” Drewnoski noted. “This can be met pretty easily with corn residue because the cattle can be selective.”
As time passes into December and January and cows reach late-gestation, their nutritional requirements take a substantial jump to 14.1 pounds of TDN and 2.2 pounds of protein, the beef specialist noted. For this reason, it’s helpful to plan and have fresh residue available during this time period.
Know your corn residue
A harvested cornfield provides the cow with a variety of plant parts to select from, and each has differing nutrient concentrations (see graph). 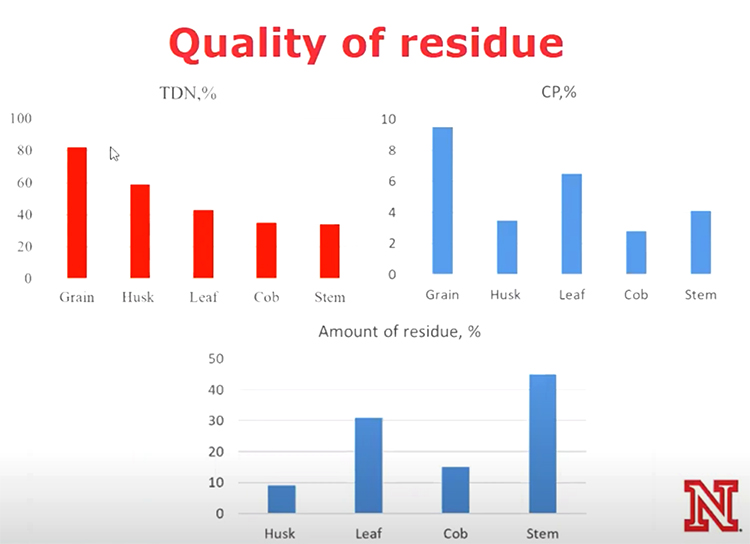 Drewnoski explained that the cattle will first select any grain that might still be left in the field. It has both the highest concentration of TDN and CP.
The next preferred plant part is the husk because it is palatable and has the most TDN of the stover parts. The leaves, which are often eaten in concert with the husks, help to provide additional protein, which the husk lacks.
It’s all about the husks
Cobs and stalks (stems) combine to provide about 60% of the residue biomass but offer little in terms of energy. “We don’t want to be depending on stalks and cobs to meet nutrient needs, even for a mid-gestation cow,” Drewnoski said. “In my opinion, we want to be moving cows to a new field or portion of field when you no longer see any husks.”
How long cattle will be able to stay on a field and determining stocking rate will depend largely on how much grain was produced off the field. Drewnoski explained that there is a good correlation between grain yield and stover yield.
“My rule of thumb is that for every 100 bushels of grain yield, I can graze a cow for about a month,” Drewnoski said. “That’s a crude measure, but it will get you in the ballpark. However, there are a lot of weather variables, and so it is important to know what’s going on in the field. You need to monitor husk removal.”
The beef specialist provided an example of how to determine a proper stocking rate using the following example of a 160-acre cornfield yielding 220 bushel per acre (bu/A) for 150 cows.
The recommendation of one cow-month per every 100 bushels harvested is based on only 15% of the total residue being removed, Drewnoski explained. We need to be at this rate of residue removal to maintain that gestating spring-calving cow.
Sometimes, residue isn’t enough
When grazing to these recommendations, will supplementation be needed?
Drewnoski said that the research shows no additional supplement will be needed if spring-calving cows are moved at the time of husk disappearance. This assumes that these are mature cows and they don’t need to improve body condition score (BCS). Of course, cows will always need to be supplemented with some minerals and vitamins, especially vitamin A, phosphorus, copper, and zinc.
Also, if the winter is extremely cold and wet, cows will require additional energy for maintenance. This might cause them to lose BCS, and some supplementation will be beneficial.
“Bred heifers, which are still growing, also need to be supplemented when grazing corn residue,” Drewnoski said. “At our recommended stocking levels, mid-gestation bred heifers will need an additional 0.5 pounds of CP per day, which can be met with 2 to 3 pounds of dried distillers grains (DDG). During late gestation, those heifers will be short on protein and energy. They will need 3 to 5 pounds of DDG or its equivalent. For the gestating heifers, you might want to think about putting them in with developing heifers and supplement at these levels for both,” she added.
For stocker cattle on corn residues, Drewnoski said that supplementation rates will need to be determined by your target rate of gain.
Finally, the beef specialist emphasized that early lactation, fall-calving cows will have a much higher nutrient demand than spring calvers. They will require 2.9 pounds of CP and 17 pounds of TDN per day. “That’s pretty hard to accomplish on corn residue without some significant supplementation,” Drewnoski said.

Feeding strategies differ with drought Next

What business are we really in? Previous