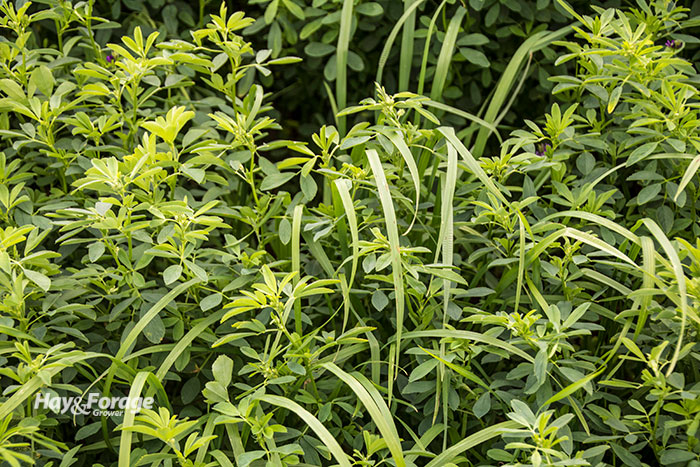 Seeding grass along with alfalfa has always been standard operating procedure in some areas of the U.S., including the Northeast. Although it’s less common to see in other regions, the popularity of the practice most certainly is on the rise, especially with higher quality grasses such as meadow fescue or a late-heading orchardgrass.

There are several factors to keep in mind regarding the decision to include a grass with your alfalfa stands, according to Ev Thomas, who currently has an agronomic consulting firm in Hammond, N.Y., after retiring from his farm manager position at the Miner Research Institute.

“I prefer alfalfa-grass in most situations, but soil test potassium (K) status may influence this,” writes Thomas in a recent issue of the Miner Institute’s Farm Report newsletter. “High forage yields, including corn silage, can quickly deplete soil potassium levels.”

Thomas doesn’t recommend seeding a grass with alfalfa unless a recent soil test confirms that K levels are at least medium to high. This is because the fibrous root system of a grass will “suck up” the K from applied commercial fertilizer or manure and will starve the alfalfa of this high-requirement nutrient.

Citing research from the Midwest that showed soybeans respond better to existing soil fertility than applied fertilizer at planting, Thomas thinks the same might also be true for alfalfa.

“If you need to seed alfalfa and the soil test K level is medium or lower, seed straight alfalfa and fertilize with plenty of potassium,” Thomas recommends. “To prevent this situation, increase phosphorus and potassium by using liberal rates of manure on low fertility fields during the years they’re in corn production.”

Thomas explains that including a grass with alfalfa doesn’t mean forage quality is sacrificed as long as certain protocols are followed. First, he suggests selecting a grass species that is inherently high in quality. Meadow fescue fits that description based on research from Cornell that has shown it to have superior fiber digestibility than most other perennial forage grasses, at least in the Northeast region.

A second important factor is to get the correct ratio of grass to alfalfa. This is often more difficult to accomplish because weather conditions immediately after seeding often dictate the success of grass establishment. Thomas describes the optimum stand as being two-thirds alfalfa and one-third grass during the year after seeding.

“Harvest timing should be based on the alfalfa maturity, not the grass,” Thomas notes.

For growers who want to consider HarvXtra alfalfa varieties, the alfalfa-grass decision is a bit more complicated. This is because all varieties with the reduced-lignin trait also come packaged with the Roundup Ready trait, and no grass options are glyphosate resistant.

Thomas explains that growers who want to take advantage of the HarvXtra’s improved forage quality attributes must either forego using an application of glyphosate or seed straight alfalfa, spray it with glyphosate in the seedling stage, and then seed the grass into the emerged alfalfa, which requires an additional pass over the field.

One of the advantages of HarvXtra-traited varieties is that they can be cut five to seven days later while still achieving the same forage quality as a conventional variety cut at the earlier date. Thomas explains that a delayed harvest may not be possible with an alfalfa-grass mixture because the grass will be too mature, likely making forage quality unacceptable for high-producing dairy cows.

For these reasons, Thomas doesn’t think HarvXtra will be as popular in the Northeast where alfalfa-grass mixtures are the norm.