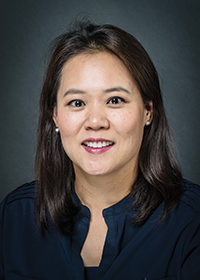 Youngmi Kim
$24,183
Alfalfa is underutilized, being mainly used as animal feed,” said Youngmi Kim, assistant professor in agricultural engineering technology at the University of Wisconsin-River Falls. But the legume’s leaves can be mined for protein and amino acids and then used as supplements or within foods or pharmaceuticals for human consumption, she added. Her current Alfalfa Checkoff research shows commercially available enzymes can efficiently extract protein from fresh alfalfa leaves.

“Consumers are getting more conscious about their food choices, and you see a lot of plant-based protein products on the market that are gaining popularity. But there have not been many products based on leaf proteins,” Kim said. Alfalfa, she pointed out, is a great source of protein, containing 25% to 30% crude protein on a dry matter basis. It also contributes amino acids with a composition ratio consistent with the Food and Agriculture Organization’s (FAO) recommended adult amino acid profile, according to Kim’s research report. 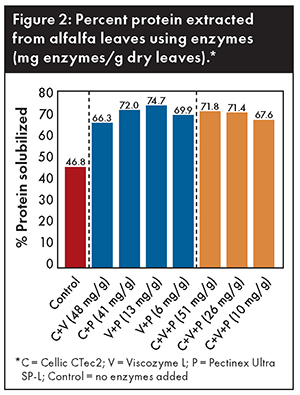 The current methods of extracting protein from alfalfa can’t extract enough to justify the costs of processing it, so Kim experimented with commercially available cell-wall degrading enzymes. Three enzyme blends — Cellic CTec2, Viscozyme L, and Pectinex Ultra SP-L — were used separately and in combination on alfalfa leaves. Cellic CTec2 was developed to degrade cellulose to fermentable sugars and has been widely used to turn lignocellulosic materials into fuels and chemicals. The other two enzymes have been used to extract juices and oils from fruits, vegetables, and grains.

“What I found from this research is that, although I can increase the extraction of protein significantly, separating that extracted protein from other compounds has not been very successful. There is work to be done. We have to find a way to purify and separate the protein,” Kim said.

She also found another obstacle: Of the two leaf protein fractions extracted, one is not edible by human standards. The white protein fraction offers high digestibility in humans, excellent emulsification, heat stability, and good water solubility. But the green fraction has negative sensory properties causing undesirable texture, taste, and smell. Discarding the green fraction would reduce the protein yield by half, which would prevent extraction from being financially viable.

She estimates the second step in future research would be to look into the sensory properties of the green protein fraction to find ways to make it more enticing. Kim also discussed using enzymatic hydrolysis to produce peptides, which are short strings of amino acids that are easier to digest and offer improved solubility and sensory properties.

Peptides produced from alfalfa leaf protein had high nutritive values and good antioxidative properties and could be used as functional foods, nutraceuticals, dietary supplements, and constituents of pharmaceuticals.

Project results
1. Cell wall-degrading enzymes can extract more protein (65% to 75%) from alfalfa leaves as compared to nonenzymatic extraction; enzyme blends were tested, measured, and optimal doses recorded.
2. Amino acid profiles of extracted protein were measured and comparable to those of isolated soybean protein reported in literature, except for glutamic acid and cysteine (see Figure 1). The antioxidative property of peptides obtained from the alfalfa protein was also measured. 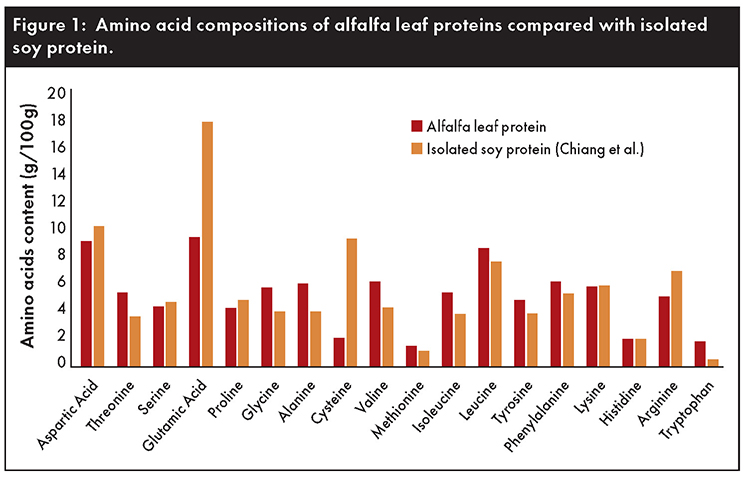 This article appeared in the February 2021 issue of Hay & Forage Grower on pages 14 and 15.

Southern alfalfa needs potassium, too Next