My alfalfa froze: Now what? 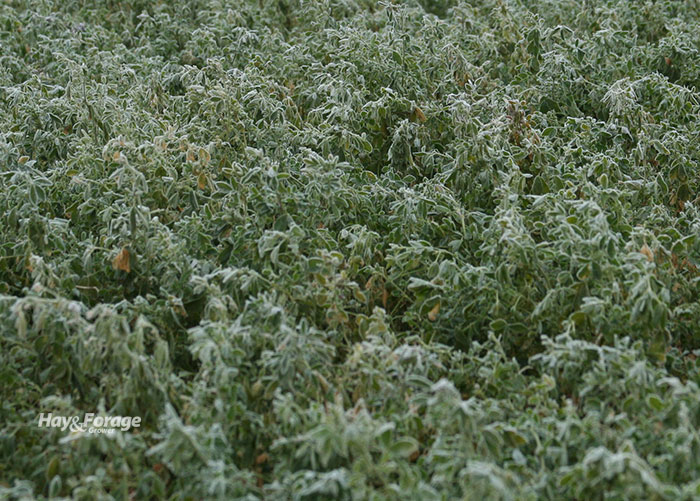 Nighttime temperatures last week were low enough to frost or freeze alfalfa plants across a large swath of the United States. In some cases, alfalfa growth was already ahead of normal for this time of year.

When frost occurs to the initial spring growth of alfalfa, it’s best to wait at least several days to a week before making an evaluation.

“The overall vigor of the stand will determine the tolerance to freezing and recovery from freeze injury,” Sulc explains. “Vigorous stands that were not cut in the fall and with good soil pH and fertility are more likely to tolerate and recover from freezing.”

Frost damage in an established alfalfa stand is characterized by wilting leaves and stems. Often, the top stems will form a “shepherd’s crook” shape. The forage specialist notes that this wilting damage is either temporary if the freeze damage was minor, or it is the initial symptom of more severe damage that will appear a few days later.

“Several days to a week after a severe freeze event, leaf and stem death will become obvious,” Sulc says. “The shoots and their growing points might be completely killed, but it is rare that the entire crown is killed unless stand vigor is very poor.”

If a third or less of the top stems are damaged, Sulc recommends doing nothing, as the remaining, undamaged stems will provide enough growth and yield. There may be some yield reduction, depending on the stand’s vigor and health, and it’s also likely that growth will be slower and the first-cut harvest date will be delayed.

“If most, but not all, of the stem tops are damaged, and the stand is less than 10-inches tall, it should recover in time,” Sulc notes. “New existing buds in the axils of leaves in the lower canopy will grow and new crown buds might be initiated and grow as well. Mowing existing top growth will not improve the recovery,” he adds.

If most of the stem tops are damaged and the stand is more than 12-inches tall, harvest the forage and allow it to regrow.

The worst-case scenario is if all the stems are frozen back with severe plant necrosis. This is an indication that the plant is probably dead.

“If a large portion of the plants in the field exhibit these symptoms, it would be best to plant an emergency forage or interseed the stand with an annual grass crop,” Sulc recommends. “This scenario is most likely for stands that were abused, older, were not healthy and vigorous, were cut in the fall, or have inadequate soil pH and fertility.”

New spring seedings are more likely to survive a cold night better than an established stand. This is because the seedlings are closer to the warmer soil surface. Seedlings are also more freeze tolerant in the cotyledon to first or second trifoliolate leaf stage than at later growth stages.

In extreme cases where death of the cotyledons and all leaves does occur, the seedlings are probably dead and will not regrow. Sulc notes that a good indicator of potential survival is if at least one set of leaves survives the freeze. A companion crop like oats planted with the forage seeding often helps protect the newly emerged perennial seedlings.