A precutter may offer processing advantages

By Kelsey Pagel
The author is a freelance writer and farmer based in northeastern Kansas.

Large round bales are the preferred form of haymaking in many parts of the U.S., but they are difficult to load and process in mixer wagons unless the bales are first put through a grinder to reduce stem particle size. However, grinding leads to additional dry matter losses and costs.

Several equipment manufacturers offer round balers equipped with precutters, which reduce the particle size of the forage fraction at the time of baling. A recent study by Kansas State University evaluated if precut bales could be put directly into a mixer wagon and eliminate the need for tub grinding.

Mike Brouk, an extension dairy nutritionist with Kansas State, led the study and presented the results during the Alfalfa U webinar series. The trial was conducted on four different Nebraska farms, but the same protocols were used at each location.

The researchers made one bale with the precutter knives engaged and then one without, using the same John Deere baler and tension settings. They did this until six cut and six uncut bales had been made at each farm. The knives were spaced 6 inches apart, and the researchers didn’t see any difference in the amount of forage material left on the ground after a baler pass between the two baling options. 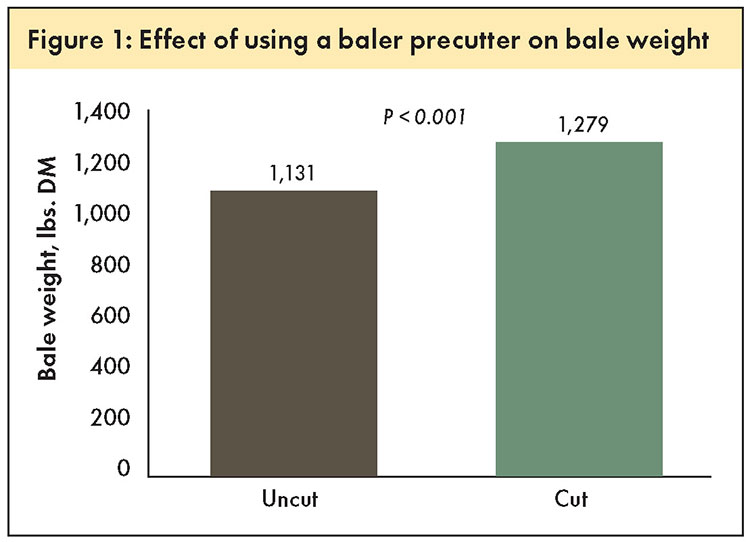 Across all of the farms, the net-wrapped bales made with the knives engaged weighed significantly more than the uncut bales (see Figure 1). “As particle size was reduced within these bales because of the cutting action of the knives, we were able to pack more material into each of those bales,” Brouk said. “We also determined that the precut bales had a slightly greater bale density. This could lead to more efficiency in the hayfield if you don’t have to bale and handle as many bales, assuming all other baler settings are equal.”

Brouk found no difference in the baling rate, so using a precutter didn’t slow down the baling process in terms of pounds of dry matter baled per minute. A precut baler does require more tractor horsepower, which results in greater fuel consumption.

“We did see a very slight increase in both acid detergent fiber (ADF) and neutral detergent fiber (NDF) in the cut bales compared to the uncut bales right after baling,” Brouk noted. “I don’t have a good explanation for this, but the difference wasn’t large enough that we would see animal performance differences during feeding. It could have just been some sampling error. Neutral detergent fiber digestibility at 240 hours did not differ between the two treatments,” he added.

All of the bales, cut and uncut, were stored outside at each farm for five to six months. Although not statistically significant, the cut bales had about 1% less storage shrink than their uncut counterparts. Presumably, this was because they were denser and shed water more efficiently, Brouk theorized.

The uncut bales were first weighed, processed in a tub grinder, and then conveyed into a mixer wagon for a final weight measurement. The cut bales went directly into the mixer wagon for processing without any prior grinding. “We really wanted to see if we could eliminate the grinding step with cut bales,” Brouk said.

The research team found that it took four minutes per uncut bale for the tub grinder to process and unload, and it took 11 minutes for a cut bale to be processed by the mixer wagon. They didn’t try to put an uncut bale directly into the mixer wagon, but Brouk asserted that the processing time would have been greater than the time needed for a cut bale.

After analyzing processed bale weights, Brouk found that the cut bales had less than 2% dry matter loss or about 20 pounds per bale after processing in the mixer wagon. The uncut bales that went through the tub grinder had an 8% dry matter loss, which was the equivalent of 73 pounds of dry matter per bale. This equated to about $8 per bale savings in dry matter for the precut bales.

“It’s important to note that this is just the processing loss,” Brouk emphasized. “Many producers grind enough hay through a tub grinder for a week or more at one time. The dry matter losses we measured do not account for the further loss of dry matter that is incurred by sitting in the weather elements until it is fed.”

After the bales were put through their respective processing, the forage material was unloaded from the mixer wagon into a windrow on the ground. Samples were collected at various points along these windrows and analyzed using a Penn State Particle Separator (see Figure 2). 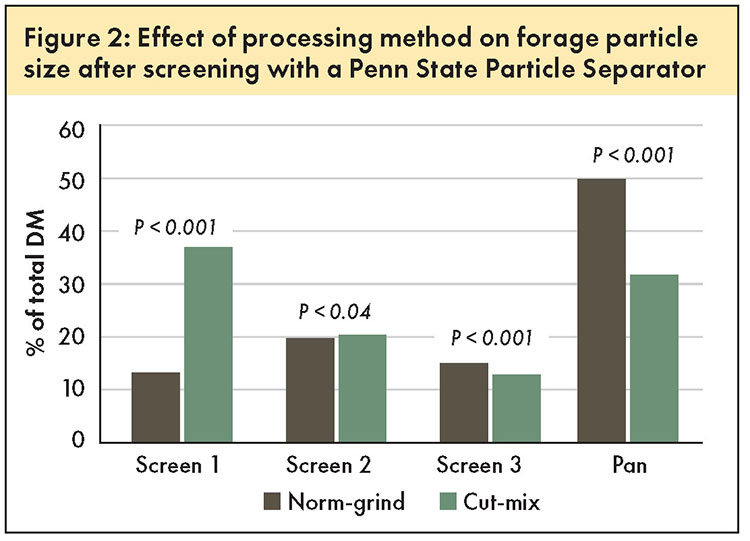 “There were significantly fewer fine particles and significantly more fiber particles greater than three-quarters of an inch for the cut bales put directly into the mixer wagon compared to the uncut bales that first went through the tub grinder,” Brouk noted. “The fiber that is greater than three-quarters of an inch is associated with increased rumination. This is especially important for livestock that are on a high-concentrate diet,” he added.

Brouk concluded that a baler precutter does offer some advantages in terms of being able to skip the tub grinding step and save on the dry matter losses that occur both during processing and storage.

It’s a waiting game Next