By Mike Brouk
The author is a professor and extension dairy specialist with Kansas State University. 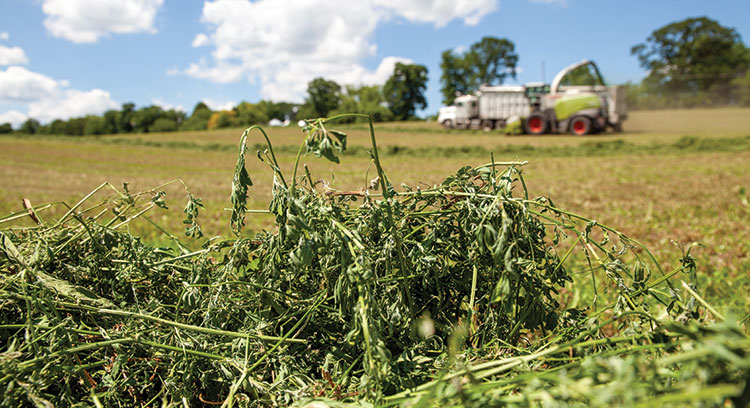 The rising value of protein over the last 10 months should cause dairy producers and dairy nutritionists to reconsider the value of alfalfa hay and silage in dairy rations. Soybean meal (SBM) prices have jumped from about $300 per ton to $450 per ton during this period. This has resulted in the value of crude protein (CP) climbing from about $0.315 to $0.475 per pound. You could use other sources of protein to calculate this value, but all other sources of natural protein have followed the SBM prices.

How does this impact the inclusion rate of alfalfa in dairy rations?

It depends on the region and availability of alfalfa. In regions with adequate alfalfa supply, prices of alfalfa have remained steady during this time even though the value of the CP in the hay has risen due to the higher value of other protein sources.

A ton of alfalfa hay containing 18.5% CP (as fed) would provide 370 pounds of CP. A 16-cent per pound boost in CP value results in a $59.20 per ton increase in the value of the CP contained in the hay. This is a significant change in the value of alfalfa hay nutrients. If you are not accounting for the changes in nutritive value of alfalfa hay, you may be missing an opportunity to include more alfalfa in the ration. As a dairy producer, it might be worth a conversation with your alfalfa suppliers to establish the price and availability of the 2020 harvest as well as a discussion on the expected value of the 2021 harvest.

In addition to potential savings on supplemental CP expense, adding more alfalfa forage to the dairy ration may also result in higher butterfat production. A 0.001 increase in butterfat concentration could result in a 10- to 13-cent improvement in daily milk income per cow. While this is not a guarantee, it is another factor to consider when evaluating the value of alfalfa hay in the dairy ration. Accounting for both changes in feed expense as well as improved income potential are important factors in making the decision to feed additional alfalfa.

Another factor for dairy producers and alfalfa hay growers to consider is the impact of the value of protein on the future price of alfalfa hay. Every 1-point increase in CP concentration adds another 20 pounds of CP to each ton of hay harvested. Saving leaves and harvesting at early bud stage are two critical factors in the eventual CP content of the harvested hay. If CP is worth 45 cents per pound, then we are adding $9 per ton for every 1-point bump in CP concentration. Every $50 per ton increase in the price of CP results in a $1 per ton improvement in the value of the alfalfa CP.

What will you do?

The alfalfa harvest is already underway in many areas of the U.S. How are you going to improve the crude protein content of your alfalfa? Is this the year to take the first cutting at the bud stage? Are you going to use a hay preservative and try to bale at a slightly higher moisture content? Will you control the cutting area to match the limited number of baling hours when the hay will be at the right moisture to prevent leaf shatter? Will you rake or merge only with dew on the forage?

If you are going to preserve the leaves in the harvested forage, consider how you harvest and accept that you might need to cut fewer acres each day to bale within the correct moisture window. If you can make some slight changes in your harvest procedure or timing to harvest more CP, it could result in a nice return on investment. Leaving a green trail of alfalfa leaves in the field during harvest or a green cloud of dust behind the baler or chopper will be costly this year.

Finally, consider the value of feeding alfalfa with a higher leaf content on dairy herd performance. The leaves are the most digestible portion of the alfalfa plant. Improving the leaf density of harvested alfalfa forage will increase the total digestible nutrients as well as boost the ruminal digestibility of the neutral detergent fiber. This will elevate total tract neutral detergent fiber digestibility (TTNDFD), resulting in a higher milk production potential.

As we continue to see very low margins in the dairy industry, consider how to better utilize alfalfa forage in rations and how to capture more value out of the 2021 alfalfa harvest. We have the tools, knowledge, and abilities; it’s just a matter of putting everything together in a timely manner.

This article appeared in the April/May 2021 issue of Hay & Forage Grower on page 32.

This year’s forage quality stakes are high Next