Let’s get real on forage yield 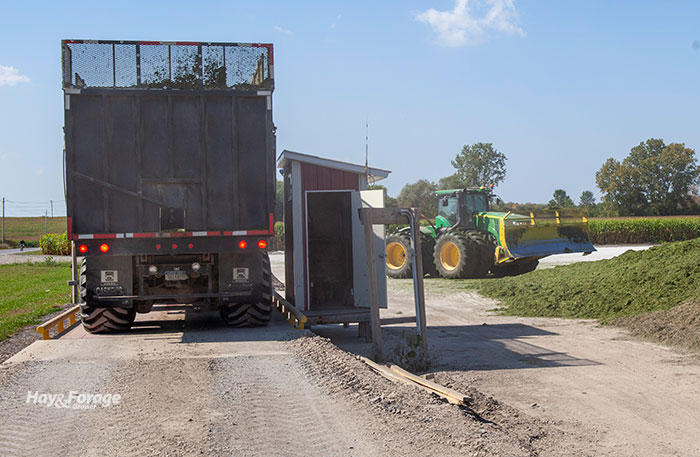 Measuring forage yield has never been easy, at least compared to weighing grain crops off the combine. During my university extension days, I spent many years dragging around heavy pad scales, one per tire, in an attempt to quantify alfalfa yields on a small portion of a producer’s field.

Nothing about the process was easy, and the entire exercise was wrought with room for error as an area was measured and forage wagons full of wet alfalfa needed to be stopped, weighed, and sampled. Sometimes the pad scales worked correctly, sometimes I felt like they were akin to a random number generator.

It always bothered me that we couldn’t get reasonably accurate numbers for alfalfa yields from production fields. I knew the estimates from USDA were — for the most part — just a compilation of producer guesses, and I thought most of them were low. On the other hand, I wasn’t buying the 8-ton average dry matter yields that some producers were telling me.

The “it” was that some dairy farms were putting in their own drive-over scales to verify commodity purchases. This was the answer to a longtime problem. Weighing alfalfa could be done quickly, accurately, and entire fields could be quantified over years, not just the best areas of the best fields in a single year. No additional time and trouble were needed by the producer.

It was through this revelation that the Wisconsin Alfalfa Yield and Persistence (WAYP) Program was born. That was 2006, and the first fields were enrolled in the program in 2007. Our objectives were simple: To verify the yield and quality of alfalfa harvested from production fields over the life of the stand, beginning with the first production year (year after seeding), and to quantify reductions in stand productivity as fields age.

By design, the protocol for the program was made simple. Starting with the first production year, fields had to stay in the program over their stand life, which was determined by the producer. All chopped forage at every cutting needed to be weighed and sampled. Two composite samples were taken for each cutting and analyzed at the same laboratory for moisture and forage quality.

Reporting results did not include any variety information so that the program wouldn’t morph into a yield contest. No special management was required or desired. We wanted the results to mirror standard production practices.

From that first initiative in 2007, the program continues today, and fields are self-entered from across Wisconsin. To date, data has been collected from 115 fields (275 site-years) with a total of 63,807 dry matter tons of forage harvested, weighed, and sampled from nearly 7,000 acres.

After I returned from the University of Extension and assumed the managing editor position at Hay & Forage Grower six years ago, Mike Bertram, superintendent of the Arlington Agricultural Research Station, volunteered to oversee the WAYP Program.

As it has since nearly the beginning, the Midwest Forage Association’s competitive forage research program has provided funds for testing all the forage samples.

This program has yielded a wealth of data and information. As you might imagine, every year has been different in some respect.

Generally, participants in the WAYP Program have been above average alfalfa producers. Most of the fields come from large dairy operations or from farmers producing alfalfa for these operations.

Through the years, the average dry matter total-season alfalfa yield has settled at 4.4 tons per acre. The range for average yield across all fields in a single year has been 3.6 to 5.1 tons per acre. The mean dry matter at harvest averaged over years has been 45%. Those harvests that were baled as dry hay were not included in this average.

A total of 11 fields to date have exceeded 6 tons of dry matter per acre. Conversely, 103 fields have averaged less than 4 tons per acre in a single year.

With 236 site-years considered, the average percent of total-season yield for a four-cut system was 35, 25, 21, and 18 for first, second, third, and fourth cut, respectively. In those fields under a three-cut system, first cutting accounted for 46% of the total-season yield.

In addition to yield and persistence data, forage quality information has also been documented during the past 14 years. If you’re interested in those results, follow this link for the complete project report.

Baby calves, new seedings, and a bad day Next