Here’s how to boast on your oats 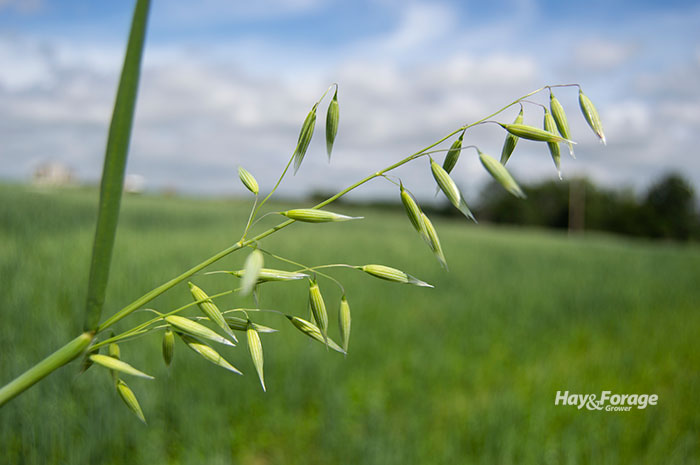 This year, many parts of the country have been stuck at one end of the moisture spectrum or the other. Some areas are parched while others are soggy, and neither condition has been ideal for grazing livestock or making hay.

Producers seeking other forage options may not need to look any further than oats. Planting oats in the back half of the growing season can benefit graziers and haymakers alike. Although the small grain is traditionally planted in early April, doing so now can ensure livestock feed for the months ahead.

Oats grown for forage can be a double crop after wheat, which tends to be harvested before the end of July. The extension specialists say the trials found that planting oats August 1 through 10 maximized the crop’s quality and yield.

“Shorter day length triggers oats to grow more leaf rather than try to produce more seed,” the educators explain. “But, if planted too late in the year, there will not be enough time for growth if considering a hay or haylage harvest,” they add.

Applying nitrogen fertilizer at a rate of 50 pounds per acre for mid-July to mid-August planting was shown to boost yield, as well as crude protein (CP) and total digestible nutrients (TDN). Even so, Gahler and Hartschuh point out that oat yields can be reduced by up to half a ton per acre when planting is delayed into September. Such a decline in yield makes it less cost-effective to mechanically harvest oats for stored feed. Instead, they suggest administering a greater amount of fertilizer to oats planted late and allow livestock to graze them.

“Some validation has been given to applying up to 100 pounds of nitrogen in the case of September plantings,” the educators state. “This has shown an economical advantage when plans are to graze those oats into the winter.”

Oats do winterkill, but growth does not stop completely until plants have endured a significant amount of time below 28°F. This means oats can potentially be grazed into the months of November and December.

Gahler and Hartschuh recommend seeding oats at a rate of 2 to 3 bushels per acre. Drill oats up to 1.5 inches deep into soil with an adequate level of moisture. Although no-till planting is advised, sometimes tillage can be justified.

“Shallow conventional tillage may be required to incorporate nitrogen, assist with weed control, and improve seed-to-soil contact if drills are not closing the seed slot,” the educators detail. “Just keep in mind that if mechanical harvest is the intention, loose soil from conventional tillage may contribute to significant soil in the harvested crop, leading to higher ash content in feed.”

Oats are most often harvested for silage or baleage, but they can also be cut for dry hay if the weather allows. In the latter scenario, the educators say oats must be tedded multiple times, and six or more days of drying may be necessary during late September or October.

In their recent trials, fields planted after wheat harvest from mid-July through mid-August that received 50 pounds of nitrogen per acre yielded an average of 1 to 1.5 tons of dry matter per acre. Crude protein levels averaged 14% and TDN averaged 50. This equates to a nutritional value of roughly $280 per ton.

One caution is oats’ susceptibility to crown rust. This can appear approximately 30 days after planting, no matter the plating date. Administering fungicide at this time was shown to mitigate rust development on oats in the trials, improving their feed quality.

Amber Friedrichsen is serving as the 2021 Hay & Forage Grower editorial intern. She currently attends Iowa State University where she is majoring in agriculture and life sciences education-communications with a minor in agronomy. Friedrichsen grew up on her family’s diversified crop and livestock farm near Clinton, Iowa.

Put a stop to pinkeye Next

A second seeding and growing season is near Previous