Planting clover in mixed grazing systems has many benefits, such as adding nutritional value to livestock diets, reducing the effects of toxic endophytes in fescue, and fixing nitrogen in the soil. The latter is arguably clover’s most notable attribute, but how much should you seed to meet your pasture’s nutrient needs?

Jimmy Henning with the University of Kentucky referred to this question as “The clover dilemma” at the Heart of America Grazing Conference in Mt. Vernon, Ill. He presented research that examined how clover’s ability to fix nitrogen can positively impact grass yields and how to manage this legume to see these effects.

Henning explained that nitrogen fixed by legumes is transferred to grass, but these two processes do not happen in the same year. Grass yields are related to legume content from prior growing seasons. 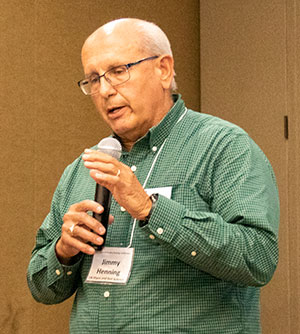 “There is not much direct transfer of nitrogen from legume to the grass,” Henning asserted. “There is some, and it’s measurable, but it’s not the amount of nitrogen we have historically associated with clover adding to the system.”

Henning said that the best way to transfer nitrogen from legumes to grass in pastures is via livestock, and this happens over time. Clover fixes nitrogen in nodules on its roots. When animals graze the plant and remove top growth, nodules will slough off and contribute nitrogen to the soil. Additionally, the nutrient will be redistributed to grass as urine and manure.

This led to Henning’s next question – how much legume is required to boost grass yields instead of applying chemical fertilizers? To answer this, he referred to a study from Virginia Tech that compared the yields of three stands of fescue: one applied with nitrogen fertilizer, one mixed with clover, and one mixed with alfalfa.

“The study was able to duplicate the yield of fescue plus nitrogen with fescue plus clover, and it was actually able to increase yield with fescue plus alfalfa. But the percent of legume in the stands was 53% and 59%, respectively,” Henning summarized. “So how much clover is enough? A bunch.”

Supplementing a mixed stand with nitrogen fertilizer can be beneficial. Henning said administering moderate amounts of nitrogen in the spring can help enhance grass yields. However, he advised against nitrogen application during a legume’s establishment year.

Another aspect of the clover dilemma producers face is applying herbicides to eliminate broadleaf weeds. This practice would kill legumes, but Henning suggests the consequence might be worth the trade-off. If weeds are taking over clover, it may be more profitable to sacrifice the clover stand temporarily. Grass yields ultimately depend on the productivity of companion legumes.

“I have had a lot of producers who are reluctant to apply herbicides, but the clover they are saving is not yielding that much anyway,” Henning said. “Kill the clover, kill the weed, and deal with the next step.”

A positive outcome of killing clover by applying herbicide is that there is a burst of nitrogen released to the soil, allowing grass in the stand to have immediate access to it.

Overall, Henning advised producers to maintain 30% to 50% of legume by relative dry weight in their mixed stands year after year. Over time, this grass-to-legume ratio has the potential to support yields similar to those of stands where nitrogen fertilizers are applied and contribute to a higher economic return.

Put a stop to pinkeye Previous