Avoid the doom of algal blooms 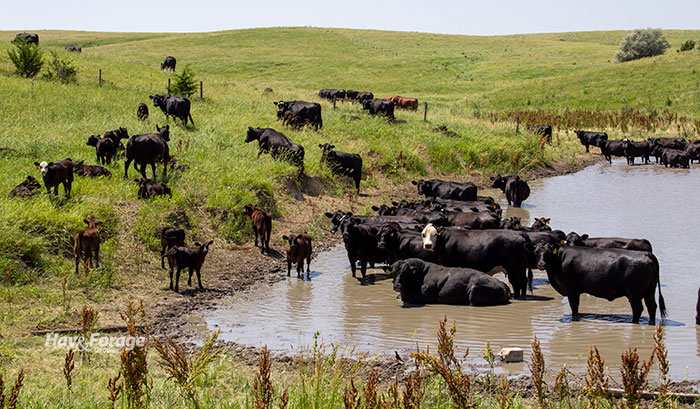 The dog days of summer have a connotation of laziness and lethargy. This is not the case, though, when it comes to bacteria production. Hot, dry conditions can encourage cyanobacteria growth in drinking water that can be harmful to grazing livestock.

Cyanobacteria blooms, also known as blue-green algae, typically occur in late summer and early fall. They result from high levels of nitrogen and phosphorous in a body of water in combination with high temperatures.

Amy Timmerman with the University of Nebraska-Lincoln extension says warm weather causes cyanobacteria populations to multiply rapidly and persist in water for several weeks. She describes what producers should look for in their pasture ponds and dugouts.

“As the bacteria colony forms, it can appear as scum on or just below the water surface,” the extension educator says. “Actively growing cyanobacteria colonies can appear bluish, green, dark green, or brownish green. They can also be red or yellow in coloration.”

Blooms are more likely to develop on the leeward, or downward, side of a body of water because the wind can blow bacteria together. Timmerman suggests looking for concentrations of blue-green algae in these locations. Another sign of poisonous conditions is the presence of dead mice, birds, or snakes near the water.

Not all species of cyanobacteria are harmful, but there are a few that are capable of producing cyanotoxins. These toxins can negatively impact livestock health, primarily affecting the nervous system and liver. If animals consume cyanotoxins, they can show adverse symptoms within 20 minutes.

Photosensitivity can also develop among livestock that survive cyanotoxin poisoning. This causes animals to be more susceptible to sunburn, especially on lighter colored body parts. Timmerman says this will look similar to sunburn in humans – dry skin that turns dark in coloration and peels.

There is no cure for cyanotoxin poisoning, but there are ways to prevent it from happening. First, limit the amount of excess nutrients that are introduced to water by runoff and soil erosion. Timmerman instructs producers to apply the proper amount of manure and fertilizer to fields and establish or maintain buffer strips of perennial plants around water sources.

To determine if cyanotoxins are present, collect samples and send them to a lab to be tested. Timmerman recommends taking at least 500 milliliters of water from a suspected area, incorporating water from the surface as well as deeper below.

“While collecting the sample, be sure to wear gloves because cyanotoxins are also toxic to humans,” Timmerman cautions. “Once a sample is collected, put it in a cool place, but do not freeze the sample.”

If blue-green algae is a problem, there are substances that can be added to ponds and dugouts to mitigate its effects. For example, activated charcoal can inhibit toxin absorption in animals and atropine can block acetylcholine receptors.

Copper sulfate can also be administered to water to kill blue-green algae, but livestock cannot drink from the treated source for at least five days because toxins can continue to be produced as algal cells die. With that said, it is ultimately best to utilize alternative drinking sources or implement fencing to divert animals away from areas of concern.

“Create designated drinking areas where the risk of blue-green algae is minimal,” Timmerman advises. “If wind concentrates the bacteria to one corner of the water body, fence that corner off. Force cattle to drink from the windward side of the pond or dugout where bacteria cannot concentrate.”

Cyanobacteria concentrates on the surface, so pumping water into a tank from below the center of a pond or dugout will be safer. If producers decided to create their own water sources, Timmerman shares the best design for them to use.

“Construct drinking ponds so they are 20 feet wide by 80 feet long and 10 feet deep,” Timmerman advises. “This decreases the surface area needed for multiplication of the blue-green algae, maintains an adequate supply of water for the livestock, and lessens the effect of wind on the surface of the water body.”

Put a stop to pinkeye Previous