U.S. Sorghum Acreage to Potentially Expand with Help from First-Year Use of New Cropping Solution

This item has been supplied by a forage marketer and has not been edited, verified or endorsed by Hay & Forage Grower. 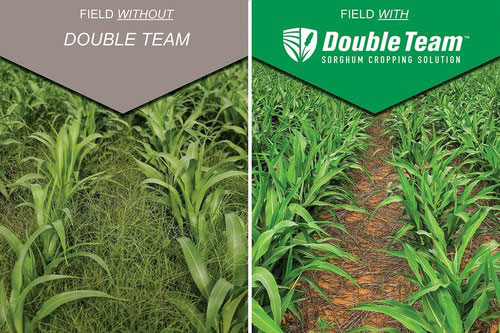 U.S. Sorghum Acreage to Potentially Expand with Help from First-Year Use of New Cropping Solution
Sorghum growers have previously been unable to control grassy weeds that rob water and nutrients from the crop. Due to pest pressures and lack of effective weed control in sorghum, sorghum acreage has dropped from around 10 million acres to typical annual acreage of 5-6 million acres. While corn, soybean, and cotton growers have benefited from weed control technologies, sorghum growers have been limited by an absence of post-emerge grass control, which has ultimately impacted overall acreage.
Double Team can fill the industry void. Piloted in spring of 2021 in key U.S. sorghum growing regions, this non-GMO herbicide-tolerant solution allows sorghum growers over-the-top use of ADAMA's First Act™ herbicide, and is designed to significantly improve grass weed control and grower profitability.
"With this technology, we can now grow grain sorghum on acres that we could not in the past," said Trey Gilchrist of CHS Dealer, who worked with one of the initial Double Team growers.
Based on thorough evaluations, measurable data, and customer feedback, initial field performance of the Double Team Sorghum Cropping Solution has exceeded expectations, setting the stage for an accelerated commercial rollout in the 2022 planting season.
"We, in the sorghum industry have been restricted for years by our past inability to control grasses, ultimately scaring us away from growing large quantities of grain sorghum throughout much of the broader Oklahoma and Kansas area," explained Kent Martin of Alva, Oklahoma. "The Double Team solution provides us with a valuable 'tool in the toolbox' providing us assurance that we can control grasses and allow us to grow more grain sorghum on a routine basis. I have seen Double Team work and I know it is a technology that will be very valuable for us in the future."
Due to its inherent drought tolerance, sorghum is generally better suited than corn or other crops to the semi-arid High Plains. However, the lack of weed control technologies in sorghum has forced many growers to other crops where herbicide tolerance traits make weed control more manageable. With Double Team, growers have the option to move back to drought-tolerant sorghum and more consistent annual yields.
In the initial pilot launch in 2021, fields were located strategically in areas where growers interested in the Double Team Cropping Solution can see the system in their fields. The first generation of Double TeamTM Hybrids fit the heart of the High Plains' sorghum growing area, with three hybrids in maturities that range from very early to medium maturity.
"Double Team is the best over-the-top grass control technology ever to be released in sorghum," said Dr. Scott Staggenborg, S&W Sorghum Product Marketing Director, "with excellent control of sandburs, volunteer crops, and other grass weeds."
To meet expected increased demand for the 2022 growing season, S&W has taken on a highly aggressive production plan to maximize its Double Team seed production in 2021. The plan was developed to ensure that every grower interested in adopting the Double Team weed control system will be able to test against their conventional sorghum weed control program in 2022.
"We are extremely pleased by the overwhelmingly positive response to Double Team by the growers across the Great Plains that were part of the 2021 limited launch," said S&W Seed Company CEO Mark Wong. "Their real-world validation of the benefits of Double Team's ability to minimize grasses reconfirms our convictions in the long-term benefits to sorghum farmers. Further, it highlights the potential Double Team offers to revolutionize the sorghum market in the same way other weed control technologies have enhanced yields and acreage for crops such as corn, soybeans, and cotton. Ultimately, our goal is to expand the size of the overall sorghum market and increase the opportunity for sustained agriculture production for years to come."
Wong concluded, "At S&W, we believe sorghum plays a vital role in the future of agriculture as a drought and heat tolerant crop with high levels of consumer uses across the globe. We are committed to the long-term adoption and success of sorghum."
Double Team™ Field Tours
Growers wishing to learn more about this exciting development in sorghum production are invited to take part in S&W's upcoming field tours. Reserve a spot at the nearest location by visiting www.sorghumpartners.com/field-tours.
September 15 (Idalou, TX) Double Team Launch Event
About S&W Seed Company
Founded in 1980, S&W Seed Company is a global agricultural company headquartered in Longmont, Colorado. S&W's vision is to be the world's preferred proprietary seed company which supplies a range of forage and specialty crop products that supports the growing global demand for animal proteins and healthier consumer diets. S&W is a global leader in proprietary alfalfa, sorghum and pasture seeds, with significant research and development, production and distribution capabilities. S&W's product portfolio also includes hybrid sunflower and wheat, and the company is utilizing its research and breeding expertise to develop and produce stevia, the all-natural, zero calorie sweetener for the food and beverage industry. For more information, please visit www.swseedco.com or www.sorghumpartners.com.
September Cover Crop Corner: Economic Series Part One: Reducing Inputs Next