The author is a professor and extension forage specialist with the University of Kentucky-Lexington. 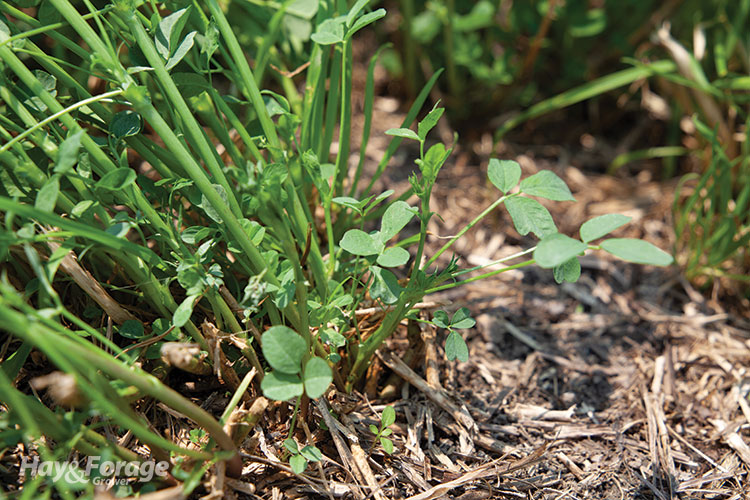 Alfalfa’s high yields and forage quality make it a premier forage worldwide. If anything about alfalfa could be improved, most growers would want to extend stand longevity.

I was showing my forage class around the seed room at a local ag supply store while also talking about pricing. When we came to a bag of Roundup Ready alfalfa, it staggered me, the grandson of an Oklahoma dryland sharecropper, that a 50-pound bag of seed could cost $500. I am not saying that it is too expensive, just that the seed cost for new alfalfa seedings can be significant.

Frankly, the price of seed is minor in the whole scheme of alfalfa establishment and production. For example, initial seed cost per acre for Roundup Ready alfalfa is about $200, but doing without a year of production may cost $400 per acre or more. Extending the productive life of a stand from four to six years drops the annual seed cost from $50 to $33.33 per acre. The bottom line is that most producers want to keep a stand of alfalfa as long as possible.

But how long should an alfalfa stand be kept, and how do you know when to terminate a field and re-establish?

Keeping alfalfa economically productive is a multi-faceted challenge. Stand life in alfalfa is maximized by:

1.Using an improved variety with high resistance to the major diseases, and one that is proven to be high yielding in relevant trials.

2.Growing on deep, well-drained soils that have been limed to near neutral pH and have been fertilized annually according to soil tests.

3.Cutting on a prudent schedule, allowing alfalfa to reach bud to first flower before harvest and not harvesting in the four to six weeks prior to a killing freeze.

Alfalfa yields naturally decline over time. Forage scientists in Wisconsin have documented that alfalfa yields peak in the year after establishment, and we have seen similar trends in Kentucky. In both instances, annual yields fell to about two-thirds of maximum yield by Year 5. While some might see this decline as justification for quickly turning over alfalfa stands, many do not because of seeding expense and the potential for establishment failures.

Much work has been done to compare stand parameters such as plants per square foot to annual yield. Plant density (plants per square foot) has long been used as a guide for stand replacement, but it varies by stand age and location. For example, the plants per square foot required to produce maximum yield in the year after establishment has been reported to be 13 in California and Michigan, 23 in Ohio, 26 in Illinois, and 17 in Indiana. As stands age, plant density declines and surviving crowns become larger. Yields are maintained by the more robust surviving plants, producing a greater number of stems per plant.

A University of Wisconsin study published in 2007 reported on the relationship between plant and stem density on alfalfa yield in one-, two-, and three-year-old stands of alfalfa at two locations in the state. They noted that although plant density per square foot is often used as a guide for stand replacement, it had little correlation to yield in one- to three-year-old stands; however, stem density per square foot was a much stronger predictor of subsequent yield. In their study, having less than 40 stems per square foot reduced yield potential.

A logical next question pertains to the relationship of yield and plant or stem density in older stands. Some insights can be gained from a University of Missouri long-term study that examined the effect of phosphorus and potassium on alfalfa yield and stand life on a soil that tested low for both nutrients.

In addition to yield, the Missouri researchers kept track of plant and stem density over a period of 10 years. As in other studies, dry matter yields peaked in the year following establishment and declined afterward (Figure 1). Unlike other trials, rainfall-corrected dry matter yields were maintained at about 4 tons per acre through Year 8 if stands had three or four plants per square foot and were well fertilized.

Stem density per square foot declined from 84 in Year 3 to 22 in Year 7 (Figure 2). In this study, yields were sustained at around 4 tons per acre even when stems per square foot fell below the 40 threshold, as reported in the 2007 Wisconsin study. 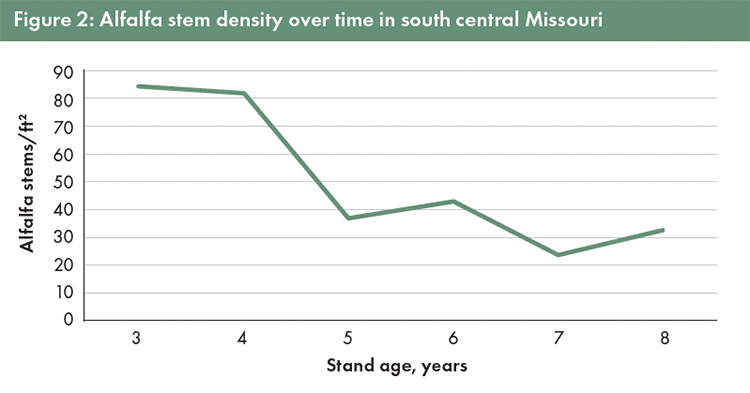 The take-home message from these studies is that stem density is the best indicator of yield potential, but the precise threshold varies. Practically speaking, stands may become economically unsustainable before stem density thresholds are reached because of plant diseases or weed encroachment. No matter if you place your replacement threshold at 30, 40, or 50 stems per square foot, stem density is the best parameter to assess future alfalfa productivity.

This article appeared in the November 2021 issue of Hay & Forage Grower on pages 34 and 35.

Begin by cutting your nitrogen bill here Next