Sustainably satisfy the need for feed 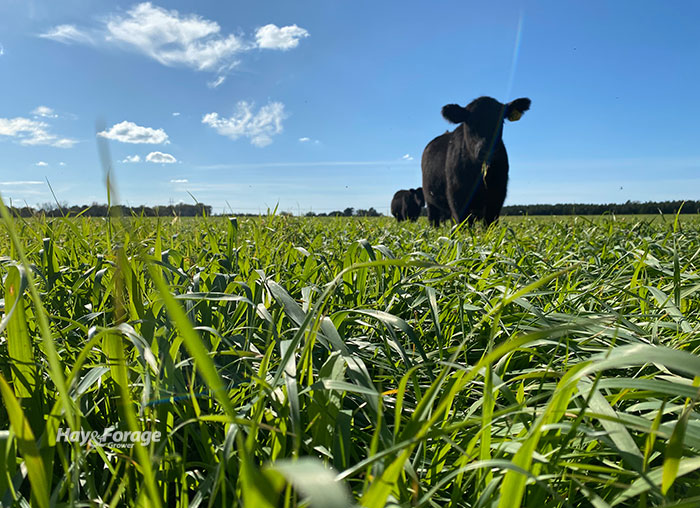 Sustainable intensification is a term used to describe farming practices that maximize yields without harming the environment and without the need to convert additional acres into cropland. Many agronomists agree this will be crucial for meeting future agricultural demands.

One practice that exemplifies sustainable intensification is grazing cropland. Sjoerd Duinker, professor of soil management and applied soil physics at Penn State University, says farmers who graze crop residues and cover crops can enhance livestock production. To prove this, researchers have been evaluating the effects of grazing cropland on four Pennsylvania farms for more than two years.

The fields being observed did not experience any tillage during the study, nor had they for more than a decade prior. Farmers who participated also established a rotational grazing system and moved their cattle daily within the crop fields as another control factor. Throughout the study, data for dry matter (DM), crude protein (CP), and nutrient levels of cover crops planted after corn silage and small grain harvests was collected.

“In that fall, forage approached maturity at the time of grazing, and feed quality of grazed cover crops declined on the farm with NDF and ADF content as high as 65% and 36.3%, respectively,” Duinker explains.

Despite this, Duinker concludes the study shows grazing cover crops planted after corn silage and small grains can be an effective strategy. It also illustrates how grazing cropland meets one of the requirements in sustainable intensification’s definition.

The other requirement for a practice to be considered sustainably intensifying is that it must not have negative effects on the environment. Grazing cropland raises concern regarding compaction, which can lead to greater amounts of soil erosion and water runoff. Nonetheless, Duinker says livestock typically don’t compact soil deeper than 3 to 4 inches, which is much less than the 18 inches of damage or more that heavy farm equipment can do.

Earthworms, dung beetles, bacteria, and fungi tend to be more active and create more pore spacing near the soil’s surface, too. Duinker suggests as long as these biological and physical processes are not interrupted, soil compaction from cattle should not be a problem, which was the case on the research farms in Pennsylvania.

Look to alfalfa as a protein supplement Next