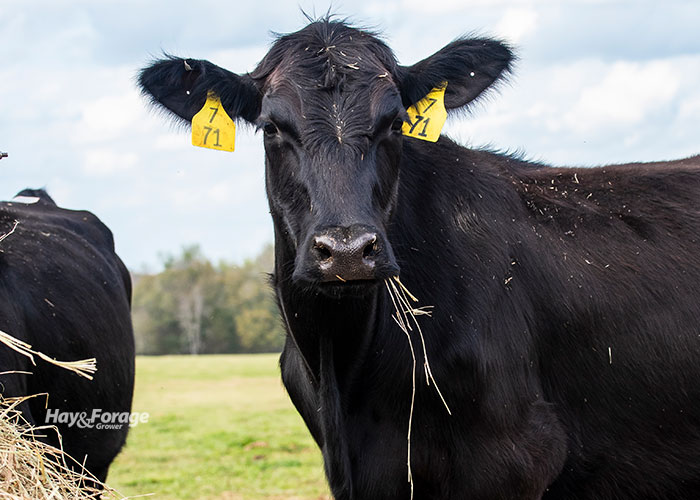 Calving season can be a stressful time, especially considering the unpredictability of when cows will calve. Keeping an eye on your herd is doable in the daylight, but management becomes more challenging during the dark of night.

Although somewhat out of producers’ control, research shows the timing of calving can be manipulated by adjusting the timing of feeding. Adele Harty, cow/calf field specialist with South Dakota State University Extension, says implementing a nighttime feeding regimen can lead to a greater number of calves born during the day.

Harty notes the first person to put this idea into practice was a rancher from Manitoba by the name of Gus Konefal. He fed his herd twice a day – once between 11 a.m. and noon and again between 9:30 and 10 p.m. – and found approximately 80% of his cows calved between 7 a.m. and 7 p.m. because of later feeding times.

“Only 9% of calves were born outside the window when traditional calf checks are preformed,” Harty states. “An important thing to note is that when heifers were separated from the data set and analyzed, 90% of the heifers also calved in this same time frame.”

To further understand the effects of the Konefal feeding system, a survey was administered to 15 beef producers in Iowa and Missouri who used this method on their farms. After feeding their herds once a day between 5 p.m. and 10 p.m., these producers reported nearly 85% of cows calved between 5 a.m. and midnight.

“Compare this data to cows not on the Konefal feeding system in the same herds that were calving 50% during the day and 50% at night,” Harty notes.

In Montana, a three-year study was completed to also evaluate differences in feeding time on calving time. The research results were less dramatic than those documented by Konefel and at Iowa State; however, there was a consistent 10% to 20% decline in the number of cows calving between 10 p.m. to 6 a.m. for the late-fed cows compared to the early-fed cows.

Before implementing the Konefal feeding system on a farm, Harty offers producers some advice. She recommends introducing later feeding times to cattle at least one month before calving season is expected to start to give animals time to adapt.

Feeding consistency is also key. “Iowa State advises staying as close to the same feeding schedule and feed amount as possible each day,” Harty says. “Deviating more than 15 minutes or providing too much feed will negate some of the desired results.”

The Konefal feeding system is best in drylot situations where all of the animals’ feed is provided and regulated. Even so, Harty warns that adverse weather at the time of feeding can discourage cattle from going to a feedbunk, interfering with animals’ eating schedules.

Finally, Harty instructs producers to continue checking their herds at night. Even though the Konefal feeding system has been shown to improve the likelihood of daytime births, this outcome is not guaranteed for every cow.

Don’t be fooled by caramelized hay Next