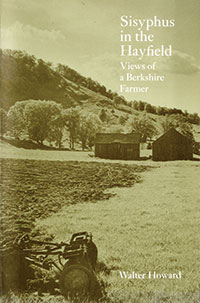 In his book Sisyphus in the Hayfield: Views of a Berkshire Farmer, author and dairy farmer Walter Howard wrote:

“Hay and I start the season as friends. No Chanel can match the smell of hay cured in early-June sunshine. By mid-July, the friendship is severely strained, the perfume larded over with sweat. And with August and second wind, an uneasy truce at best as the barn fills and we head for the final tree line.”

A friend recently gave me Howard’s book to read. It’s not a book that ever graced The New York Times’ list of best sellers, but it is a book that I found unable to put down until the final page was turned.

The collection of short essays was from a time when Howard, who died in 1987 at the age of 51, was the op-ed page editor of The Berkshire Eagle newspaper in western Massachusetts. Many of the entries encompass his 1970s and 1980s dairy farm experiences, both serious and humorous, and the evils of agricultural policy at the time. Many of the discussed evils still exist today.

Howard was a graduate of Yale University — a thinker. His family owned a dairy farm in the Berkshire Mountains, and it was here that Howard farmed full time for over a decade before his newspaper gig. Howard’s father, Sidney, was a Pulitzer Prize-winning playwright and won an Academy Award for the screenplay of “Gone with the Wind.” Sidney died in a farm accident on the Howard dairy.

And that brings us to Sisyphus.

If your memory of Greek mythology is a little rusty, or you haven’t watched “Jeopardy!” in a while, Sisyphus was the king of Corinth who got on the wrong side of both Zeus and Hades. He was condemned to eternal punishment in Tartarus, said to be the lowest region of the Underworld. Sisyphus’ post-death fate was to roll a boulder up a hill, only to have it roll back down when it neared the top. The actions of both the boulder and Sisyphus would repeat perpetually.

Howard wrote: “Meanwhile, I sweat through a recurring harvest nightmare in which a Sisyphus, confronted with an endless sausage of timothy, clonks away on his baler toward a receding horizon, while behind him the bales untie themselves and subside comfortably into the stubble.”

The author farmed during a time when cranking out small square bales and moving them off the field by hand was still in vogue. That has changed. What hasn’t changed are the realities of being a haymaker, whether you chop it or bale it big, small, or round. These realities include:

• When you cut hay, it grows back. There is no “being done” during the growing season; it’s not a “one-shot” deal like corn or other annuals.

• Weather conditions during those few days from cutting to baling are cause for losing thousands of dollars per shower and responsible for an equal number of minutes of worry and frustration.

• Timing is always of the essence. There’s little to no wiggle room for the haymaker. Working against optimum timing is the weather, any number of potential mechanical breakdowns, and the high likelihood of a flat tire at the most inopportune time. Howard wrote regarding tires, “Lord knows, the road to balable hay is always paved with nails and barbed wire.”

• There are those days when windrows seem like an “endless sausage,” and we can relate to Sisyphus with an r-squared above 0.9.

There are plenty of farmers who don’t raise livestock or the required ruminant feed. They are often chastised by the sustainability crowd for not inviting perennial forages into their coveted two-crop rotation. What these groups don’t understand is that many farmers want no part of the realities of haymaking. It takes a special individual with Sisyphus-like persistence. Many of you are likely members of this clan.

As you read this, the days are already getting longer. Hayfields are dormant and thinking of ways to frustrate their masters during next season. Howard wrote of this time: “I should start right now planning for the big assault next spring. But please, God, give me a couple of weeks to think about something else for a change.”

Happy haymaking in 2022. May the force of Sisyphus be with you.

This article appeared in the January 2022 issue of Hay & Forage Grower on page 4.

It could be worse Next