The author is an emeritus professor of dairy nutrition with Cornell University. 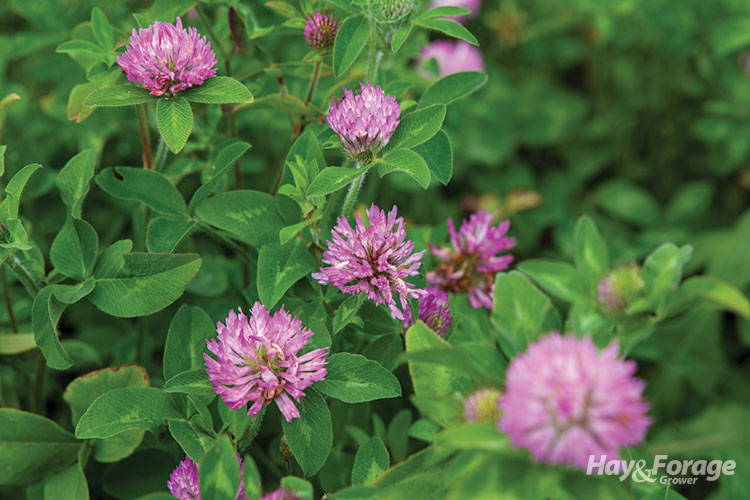 Red clover is a legume forage that may fit some situations as a replacement for alfalfa. This forage can grow on soils not well suited for alfalfa. These include poorly drained soils and a wide range of pH (5.8 to 7). In this situation, yields of red clover can have higher yields than alfalfa.

There are some nutrient composition differences between alfalfa and red clover. Crude protein content can be similar, but red clover has less soluble protein and more rumen undegradable protein. This is due to polyphenol oxidase enzymes in red clover. Fiber levels can also be like alfalfa, but red clover has lower lignin and a higher neutral detergent fiber (NDF) digestibility. However, the rate of decline in fiber digestibility, with advancing maturity, is slower for red clover. Data from trials in New York found that red clover was higher in sugars and lower in starch than alfalfa.

Several studies were conducted at the University of Wisconsin and the USDA Dairy Forage Research Center comparing alfalfa and red clover silages in dairy cattle diets. The diets used were 50% to 70% forage in the total ration dry matter. The forage portion of the diets was 100% alfalfa or red clover silage. Dry matter intake tended to be lower with red clover silage diets, but this was statistically different in only three out of seven trials reported. Milk production was higher on the red clover diets in one trial and lower in two other trials. Nitrogen use efficiency and energy digestibility tended to be higher when red clover silage was fed.

Tom Kilcer from Advanced Ag Systems in New York replicated plot trials comparing alfalfa and red clover forages. There were three locations in New York with different growing degree days. We used the Cornell Net Carbohydrate and Protein System model to predict metabolizable energy (ME) and metabolizable protein (MP) milk production. The diet used was 65% forage with 60% of the forage as corn silage and 40% as either alfalfa or red clover forage.

The results of these studies indicate that red clover can be an alternative to alfalfa. A key factor in this decision will be the soil type, drainage, and soil pH. Red clover has higher fiber digestibility than alfalfa and less soluble and rumen degradable protein. This provides more rumen undegradable protein and more microbial protein. The amount of a bypass protein source in the dairy diet may be less when using red clover diets, which can lower purchased feed cost.

A lower cost protein source can be used as a substitute to provide supplemental protein when red clover is fed. There appears to be less concern of lower dry matter intake when red clover is in a mixture with other forages. A forage analysis should include NDF digestibility to take advantage of red clover in dairy cattle diets.

This article appeared in the January 2022 issue of Hay & Forage Grower on page 15.

It’s all about water in the San Joaquin Valley Next