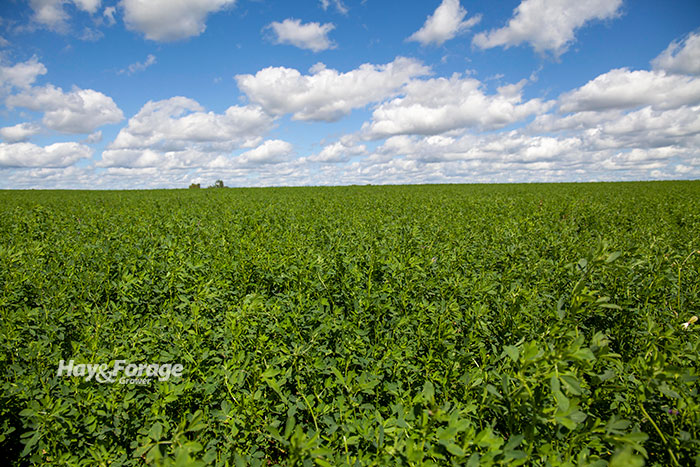 Alfalfa is instrumental to livestock production. Its high levels of fiber digestibility and crude protein make it an important component to an animal’s diet — from beef cattle to lactating dairy. But what is alfalfa’s value in a crop rotation?

This question was posed by Dan Undersander, forage professor emeritus at the University of Wisconsin-Madison, at the Croplan Alfalfa Tri-State Field Day in West Salem, Wis. After detailing alfalfa’s significance as a feedstuff, he continued to note the forage’s role in corn production, suggesting it may be economical to rotate alfalfa to corn as often as every two years.

Undersander accumulated over 30 years of data across 12 states to find that alfalfa yields were greatest in the second year after establishment on the observed fields. “If we set yields in the first year after seeding at 100%, the next year is 103%. Then it starts to decline,” he said. On average, yields were reduced in the third and fourth years after establishment by 17% and 25%, respectively.

To compare how this could offset the price of commercial fertilizers, Undersander multiplied 175 pounds of legume nitrogen credits by 92 cents per pound, which was the price of urea fertilizer at the time of his calculation. This equals a cost savings of $161 per acre.

Not only could this be a more affordable way to fulfill corn’s nitrogen requirements, but the corn planted after 2-year-alfalfa stands from the data yielded 20% more than corn-on-corn. “With our average state yield at about 180 bushels per acre, 20% more would be an additional 36 bushels,” Undersander said. “If corn prices are roughly $7 a bushel, that comes out to an extra $252 per acre.”

In this example, producers could save a total of $413 per acre by rotating alfalfa to corn after two years, maximizing the yield and profitability of both crops.

Despite this research, Undersander recommended assessing individual alfalfa fields before terminating them in the fall. If a stand’s density is sufficient — even after its second year — it may be best to keep it in production instead of turning it to corn.

“Count cut stems in September right after the last cutting,” he asserted. “If there are 55 stems per square foot, alfalfa will yield reasonably well next year. If you’re at 45 stems or fewer, you should think about taking it out.”

‘Tis the season for stockpiling Next