The author is an associate research/extension professor with Mississippi State University based at the Coastal Plain Branch Experiment Station in Newton, Miss. 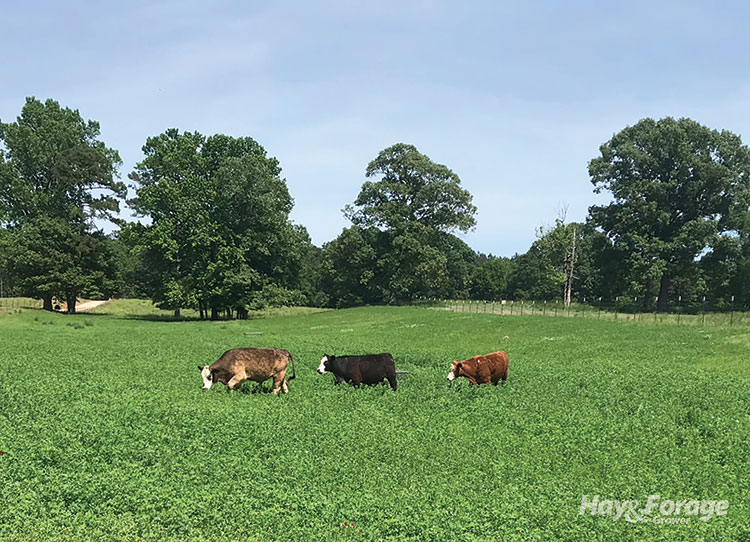 Cattle production in the southeastern U.S. is often considered an inefficient and unprofitable enterprise due to the lack of high-quality forage species utilized that can make beef production more competitive. Warm-season perennial grasses are the foundation for most grazing systems in this region. Despite proper nitrogen (N) fertilization, these grazing systems are often inadequate for supporting the nutritional demands required for stocker cattle, particularly during the summer months.

Interseeding alfalfa into warm-season pastures has shown the ability to enhance nutritive values, extend the grazing season, and improve animal weight gain and carrying capacity. However, profitability associated with utilizing legume grazing systems can be lower compared to the conventional practice of applying synthetic N to growing stands of bermudagrass. This can be attributed to market volatility, N price and ease of application, successful alfalfa establishment and maintenance, and producer reluctance to adopt new grazing strategies.

Improving nutritive value, reducing applied N, and increasing forage yield for perennial pastures with the inclusion of legumes has long been recognized as a sustainable practice for modern grazing systems. The use of alfalfa in bermudagrass systems, however, has shown mixed results.

Research has reported greater alfalfa competitiveness within Coastal bermudagrass at varying row spacings, along with improved crude protein (CP) and N uptake. Others have reported CP values of interseeded Cimarron alfalfa without N fertilization exceeded those of Tifton-44 bermudagrass monoculture at the 400 pounds of N per acre rate. Unfortunately, some research has observed significant stand reductions after two years of production in southeastern states.

In terms of grazing, extended grazing seasons have been reported when alfalfa was interseeded into bermudagrass compared to alfalfa as a monoculture. The development of grazing-tolerant or dual-purpose cultivars of alfalfa has allowed producers to transition into these systems, but they require new management schemes, such as weed control, grazing management, and higher soil fertility, which can ultimately reduce net returns.

Despite the multitude of research investigating the biological effects of interseeding alfalfa into warm-season grasses, there remains little information regarding the economic potential of such forage systems as a substitute for the common practice of applying synthetic sources of N, particularly in eras of high costs.

We recently completed a research study and compared yield, nutritive value, and animal performance within three perennial grass systems, and determined if the interseeded alfalfa system can be more profitable than the conventional N management strategies commonly used in the Southeast. The higher management required with legume-based systems must be justified economically for producer adoption.

Fertilizer was applied to each paddock based on soil test recommendations. For the BG and BGN paddocks, phosphorus (P) and potassium (K) were applied at the beginning of each grazing season. Nitrogen was applied to the BGN paddocks in the form of urea ammonium sulfate (33-0-0-11S) in a split application at a rate of 50 pounds of N per acre approximately 30 days prior to the onset of grazing, and again during the middle of the grazing season each year. In the BGA paddocks, P and K were applied based on recommendations for perennial grass with perennial legume, and liquid boron was mixed with herbicide applications to meet alfalfa boron requirements.

In each year of the trial, 36 weaned, predominantly Brahman crossbred steers averaging 601, 630, and 674 pounds for 2017, 2018, and 2019, respectively, were used in the trial. Animal performance data, including animal days (AD), average daily gain (ADG), and total gain per acre (GAIN), were calculated for each paddock. Also, forage yield and nutritive value (CP and total digestible nutrients [TDN]) were determined.

The expected revenues and costs associated with each production practice were calculated to determine profitability. These costs included fertilizer, seed, establishment, herbicide and custom application rates, and opportunity costs for capital. Three-year average costs for each system were summed and then subtracted from the expected revenue.

For BGA, establishment costs were prorated over the expected three-year life of the stand. Average Mississippi prices for the 2020 production year were used for all inputs with an annual percentage rate of 7.5% to calculate cost for capital and the prorated payments for BGA. Cost of gain was calculated as total production costs per acre divided by GAIN.

Our economic analysis can be found in Table 1. Mississippi statewide average steer prices were 13 cents, 10 cents, and 25 cents lower at the initial placement price compared to the sale or ending price for 2017, 2018, and 2019, respectively. Total production costs were $11.41, $79.60, and $105.64 per acre for the BG, BGN, and BGA treatments, respectively. The price of N used for analysis was 16 cents per pound for urea ammonium sulfate. However, at the time of this writing, N prices have more than doubled, with statewide prices averaging 36 cents per pound for urea ammonium sulfate. This will have a dramatic effect on pasture fertilization programs and decisions regarding the use of legumes. 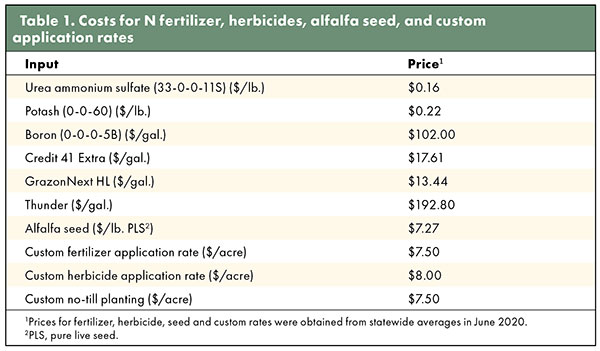 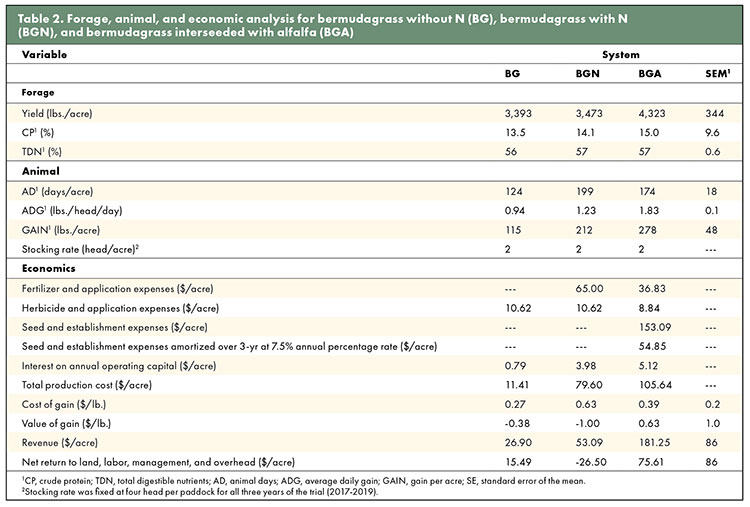 Finally, once production costs were accounted for in total net revenue to land, labor, management, and overhead, no differences were observed between treatments. The BGA and BG treatments had positive net returns of $75.61 per acre and $15.49 per acre, respectively. The BGN treatment had a negative return of -$26.50 per acre. This was a $102.11 per acre difference between the BGA and BGN treatments.

The cost and return differences are sensitive to changes in input costs that differ across BGN and BGA — primarily the cost of fertilizer. This is especially relevant in the current market for fertilizer where prices have more than doubled since year-ago levels to reach record highs. The BGN treatment is most impacted by changes to fertilizer prices because N cost accounts for approximately two-thirds of the total cost of production. Fertilizer costs (excluding application) used in our study were $50 per acre for BGN, $29.33 for BGA, and $0 for BG.

Based on our three-year grazing trial, interseeding alfalfa into common bermudagrass may result in greater forage yields and higher nutritive values. Even with the additional input requirements of alfalfa such as herbicide and fertility applications, along with grazing management, interseeding alfalfa results in greater animal performance (ADG and GAIN) compared to fertilized and unfertilized bermudagrass. However, the realized animal days grazing interseeded alfalfa pastures are lower in comparison to fertilized pastures, and alternative grazing strategies such as complimentary forage or supplementation programs may be necessary when animals are not placed on interseeded pastures.

The additional management commonly associated with legume systems is often greater than the minimal effort required to manage pastures with synthetic fertilizers, regardless of potential improved animal productivity. However, during times of high N prices, interseeding pastures offers some advantage.

This article appeared in the August/September 2022 issue of Hay & Forage Grower on pages 30-32.