Prussic acid crunch time — or is it? 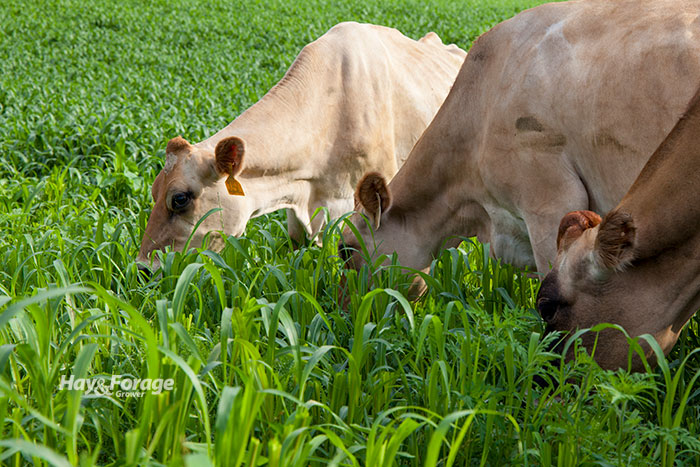 Frost arrived in some Northern states last week, and it won’t be far behind for others. This means that the questions surrounding prussic acid poisoning from grazing or harvesting sorghum species will intensify.

Prussic acid poisoning is an interesting forage phenomenon. On the one hand, it is serious and can kill livestock. On the other hand, it’s not very common, and many producers seem to dodge its bullets even where recommended rules are broken.

The growing number of acres of sorghum, sorghum-sudangrass, and sudangrass, especially in the North, enhances the odds that someone will have a bad day because of feeding or grazing recently frozen or drought-stricken plant material that’s initiated new growth. Further, the spread of johnsongrass, which is also a prussic acid risk species, offers additional reason to be on alert.

Prussic acid poisoning in cattle draws its beginnings from a plant compound called dhurrin, which is normally bound and nontoxic. If plant tissue is damaged or compromised, dhurrin is transformed into hydrocyanic acid, which is also referred to as cyanide or prussic acid. Setting off this transition could be either frost or drought.

Prussic acid poisoning is relatively easy to prevent by knowing that the risk will vary with species, plant parts, and utilization.

Prussic acid concentrations are highest in newly formed leaves and young plant tissue such as new tiller growth. This is the type of growth seen following a good rain event that was preceded by drought conditions. Such new plant tissue is also present in younger stands, those less than 18 to 24 inches in height.

When a field is frosted to the point that plant tissue is injured, not only does the frozen plant tissue increase in prussic acid, but grazing animals will preferentially graze new tiller growth, which also has a high concentration.

Although uncommon, if the sorghum forage is going to be dried and baled, prussic acid concentrations decline by as much as 75% during the wilting process. Making sorghum or sudangrass silage also is relatively safe if the forage is not fed for six to eight weeks, which is enough time for the cyanide to dissipate out of the forage as a gas during fermentation.

Grazing, either during a frost event or soon after, is the highest risk scenario because of animal selectivity for those plant parts highest in prussic acid. Greenchopping the field would offer a slightly lower risk because animal selectivity is reduced; however, feed the greenchopped forage immediately.

Animals that have consumed forages with a high prussic acid concentration can die within minutes. Prussic acid hinders the ability to transfer oxygen in the blood stream, so the animals essentially suffocate to death.

1. Don’t give cattle the opportunity to either graze young plants or selectively graze young plants or newly formed leaves. Keep cattle out of sorghum-sudangrass until it reaches at least 24 to 30 inches tall and sudangrass until it grows to at least 18 inches. Don’t graze immediately after a stress event such as a frost or drought. Rather, wait at least a week to 10 days, or, better yet, utilize the field before there’s a chance of frost or freeze.

2. If prussic acid is a concern, feed dry hay before turning cattle into a field of sorghum or sudangrass. Sometimes, dilution is the solution.

3. Consider strip grazing suspect fields, using a heavy stocking rate. This will help reduce plant selectivity and force the stems to be eaten with the leaves, providing a dilution effect.

4. Harvest suspect fields as silage or hay, if possible.

5. Ensure that your fertilizer strategy is sound. Research has shown that prussic acid levels are greater in fields with low phosphorous and/or potassium fertility and those only receiving nitrogen fertilizer.

6. Test before feeding. There are laboratory tests available that will measure the concentration of prussic acid. This might only be useful for silage or where the field will be greenchopped, and feed selectivity isn’t an issue.

7. If johnsongrass is prominent in pastures, make sure there is plenty of growth of other desirable grazing species that cattle can select from. Cattle like to eat johnsongrass, so ensure it’s not a major component of their grazing diet.

The possibility of prussic acid poisoning is not something to fear but rather to manage around. Yes, the worst-case scenario is dead cattle, but it’s a result that can be easily avoided.