The author is an area assistant livestock agent with the University of Arizona based in Cochise County. 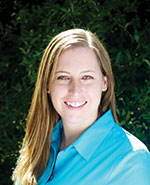 Ashley Wright
Although we’re heading into the winter months, looking ahead to spring and being prepared to ward off potential pasture problems is something that should be on every producer’s mind. In particular, the following three issues can be tough to recognize unless you know what to look for.

Also called grass staggers, grass tetany develops from an imbalance of magnesium and potassium. Rapidly growing grasses take up potassium and other nutrients from the soil quickly. If the balance of potassium (high) to magnesium (low) becomes too great and cattle are unable to mobilize magnesium stores from their skeletal system, they may develop grass tetany.

In many cases, cattle are found dead with signs of convulsions. Less severely affected animals may become ill over two to three days, exhibiting lower milk output and appearing uncomfortable and nervous. They may stop grazing, stagger, and develop twitches in their face, ears, and flank. If aroused, cattle act erratically and run with an altered (staggered) gait — hence, “grass staggers.” Eventually, they will collapse and suffer convulsions, facial twitching, foreleg paddling, and death within a few hours. Older animals, especially in early lactation, are most susceptible, although any animal can be affected. Blood samples will indicate low serum magnesium.

If caught early, cattle can be treated with an injection of calcium and magnesium. There is a risk of causing heart failure if this treatment is administered incorrectly, so it’s best performed by a veterinarian.

Grass tetany can be prevented by supplementing cattle with extra magnesium during potential danger periods. This is accomplished through providing a high-magnesium lick or switching temporarily to a high-magnesium mineral supplement. Magnesium boluses are available, although they are more labor intensive.

Magnesium, in some forms, can be bitter and unpalatable, so make sure that the form being used is consumed by the cattle. Start providing magnesium before the first rapid growth of grass begins and continue providing it until growth slows. Finally, grass tetany is rarely seen in pastures that include legume species.

There are several plant species known to accumulate high levels of nitrate under stressed conditions. These include johnsongrass, pigweed, kochia, lambsquarters, and some crop species such as sorghums and sudangrass. Plants naturally take up nitrogen from the soil and utilize it during photosynthesis. Anything that disrupts that normal cycle puts plants at risk for accumulating high levels of nitrate.

Young, growing plants are most likely to accumulate nitrates, especially if subjected to a stress event such as a late frost. The highest concentrations of nitrate are typically found in the lower one-third of the plant stalk. Drying the forage for baling does not reduce the level of nitrates significantly, although ensiling may cause a 30% to 60% reduction, if allowed to go through a full fermentation.

When consumed by cattle, nitrates (NO3) are converted to toxic nitrites (NO2) in the rumen. These nitrites are absorbed into the bloodstream where they bind hemoglobin (the compound in the blood that carries oxygen), turning it into methemoglobin. As a result, cattle are unable to get adequate oxygen to their tissues or organs and essentially suffocate.

Common signs of nitrate toxicity include blue-tinged membranes, excessive salivation, urination, and difficulty breathing, as well as the characteristic chocolate-colored blood. As poisoning progresses, cattle become weak. Moving cattle around may exacerbate symptoms or cause death because the movement of muscle requires oxygen. Pregnant cattle may abort even at low, nonlethal doses of nitrate.

Poisoning from nitrate can occur quickly, and often cattle are simply found dead. If cattle are diagnosed early, they may be treated with methylene blue.

Plants or forage suspected of being high in nitrate can be tested, as can water sources. Labs may report nitrate levels in different ways, as nitrate (NO3), nitrate-nitrogen (NO3-N), or potassium nitrate (KNO3). Be sure to look at the correct recommendation of safe levels for your lab’s reporting method. Horses, as hind gut fermenters rather than ruminants, are less susceptible than cattle to nitrate toxicity.

Also known as hydrogen cyanide (HCN), prussic acid is similar to nitrate poisoning in that it is usually preceded by some sort of plant stressor, such as a frost or drought, and it affects the cattle’s ability to utilize oxygen. Rather than preventing hemoglobin from binding oxygen (as is the case with nitrites), HCN — formed in the rumen from cyanogenic glycosides present in the plant — acts to prevent tissues from utilizing oxygen.

Cattle exhibit difficulty breathing, foam at the mouth, and become progressively weakened, but they are most often found dead. The blood of affected cattle is a bright cherry red color as it becomes saturated with oxygen that the tissues cannot uptake. The rumen is noted to release a smell similar to bitter almonds. Treatment is possible with sodium nitrate and sodium thiosulfate; however, a veterinarian should be consulted to ensure a differential diagnosis from nitrate toxicity.

Johnsongrass and other sorghums are the most likely plants to produce HCN under stressed conditions, especially when there is a high nitrogen-to-phosphate ratio in the soil Unlike nitrates, prussic acid does break down when forages are dried, so hay is rarely a concern for prussic acid poisoning.

This article appeared in the November 2022 issue of Hay & Forage Grower on page 16.