Transform a poor pasture into a good one 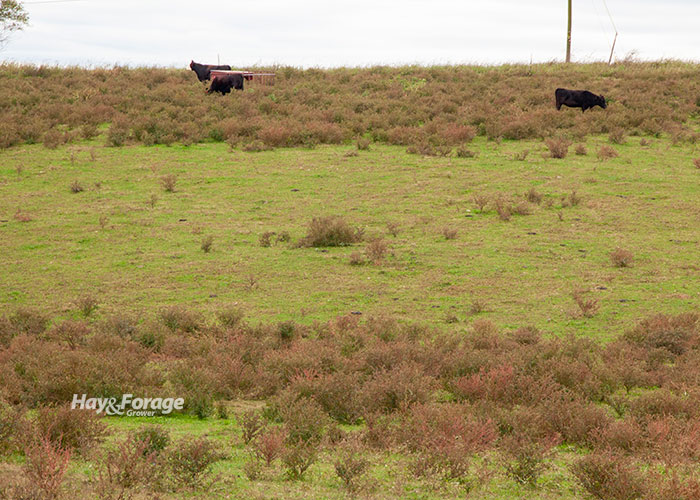 It’s not an unusual situation for people to suddenly find themselves as the not-so-proud owner or long-term renter of a previously abused or neglected pasture. In such situations, questions often arise as to what the best plan of action is to bring an abused pasture back to full productivity.

According to Chris Teutsch, a forage extension specialist at the University of Kentucky, there are a number of reasons why formerly good pastures can turn bad. These include too much or too little water; poor fertility or low soil pH; poor grazing or, in the case of a hayfield, mowing management; a poor choice of forage species; and an influx of weeds likely caused by one of the previously mentioned factors. Often, a poor pasture is the result of a combination of several negative stresses.

“Pasture renovation does not always mean having to reseed,” Teutsch said at last fall’s Kentucky Grazing School. “In fact, spraying out an old pasture and then reseeding should be considered a last-resort option. We can often renovate a pasture without reseeding it.”

The first step for improved pasture productivity is to look below ground level. Teutsch defined soil as a dynamic natural body composed of mineral and organic solids, gases, liquids, and living organisms, which can serve as a medium for plant growth.

“Below ground, in a healthy pasture, scientists have determined that we should have about a ton of bacteria, a ton of actinomycetes, 3 tons of fungi, and over 600 pounds of earthworms per acre,” Teutsch said. “When we manage the above ground with good grazing techniques, we are also enhancing the below ground ecosystem, and that’s really important to keep in mind.”

From a soil fertility standpoint, Teutsch reminded attendees of Liebig’s Law of the Minimum, which states, “The level of plant production can be no greater than that allowed by the most limiting of essential plant growth factors.”

A big advantage of well-managed pasture systems is that 80% to 90% of the nutrients applied through fertilizer, manure, legumes, and feed are cycled back to the pasture in dung and urine. “This is a big advantage compared to hay and other cropping systems,” Teutsch noted.

The forage specialist cautioned that it is up to the grazing manager to ensure that nutrients are evenly distributed across the pasture to keep fertility levels from rising excessively in some areas while declining in others. This is where rotational grazing systems with multiple sites for water and shade are important to keep animals from congregating in the same area.

Where hay is removed from fields or pastures, Teutsch noted that potassium levels can be drawn down quickly unless fertilizer is applied or the hay is fed back on the same field. Many common hay species remove nearly 60 pounds per ton of potassium as K2O. “This might be a positive situation in the case where hay is being purchased and brought on to the farm,” he said. “Every ton of hay is going to have about $78 worth of nutrients at today’s fertilizer prices, but it’s important to feed the hay where the nutrients are needed most.”

Soil testing is going to be critical for confirming what nutrients are needed or not needed. This is especially true when fertilizer prices are high, Teutsch asserted.

Aside from documenting fertility status, soil testing is important to assess soil pH. “Improper pH is a major limiting factor in forage production because it reduces nutrient availability and nitrogen fixation by legumes,” Teutsch said. “Liming pastures will both neutralize soil acidity and supply calcium and magnesium.”

The extension specialist recommends a minimum soil pH level of 5.8 to 6 for pure grass stands, 6 to 6.4 for grass-clover stands, and 6.5 to 6.8 for grass-alfalfa stands. “Right now, if you need lime, it may be your best buy because it will make existing soil nutrients more available to the plant without purchasing fertilizer,” Teutsch said.

The power of legumes

Most of the transfer of nitrogen between legume and grass occurs through the animal by the deposition of manure and urine. It can also occur when the legume plant tissues and roots die and decompose. A strong nitrogen cycle in a pasture takes several years to develop and maintain.

Teutsch suggested that legumes should make up 20% to 30% of the pasture sward. He said to add lime and fertilize according to the needs of the legumes, which can be overseeded in late winter. Frost seeding red clover and white clover generally results in the greatest success. For pastures lacking in fertility, Teutsch suggested using annual lespedeza, which is more forgiving of a low soil nutrient status.

“How a pasture is grazed can impact the botanical composition,” the forage specialist noted. “If you leave too much residual, it will tend to favor the grass. It’s also important to use rotational stocking, which makes it much easier to manage through a drought and maintain desirable forage species.”

Pasture renovation doesn’t have to involve a complete kill and reseeding. With corrections in soil fertility, the development of perpetual nutrient cycles, the establishment of legumes, and flexible, rotational grazing, poor pastures can be transformed into highly productive ones.

We need to be more drought resilient – Part 1 Next

Many factors dictate how often to move cattle Previous