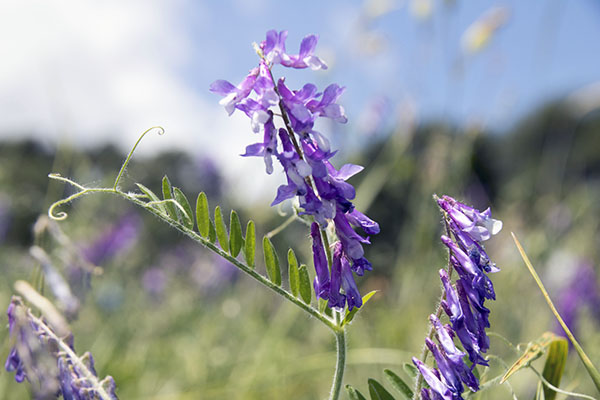 Here’s how I always approached my grandmother’s cauliflower casserole: Small bites with copious amounts of ketchup, followed by a spoonful of applesauce that rivaled the capacity of a front end loader. I learned that such a strategy would allow me to live to see another day.

My grandmother once submitted her cauliflower concoction recipe for publishing in the church’s fundraiser cookbook . . . and it got rejected, which I was convinced saved the lives of countless innocent children. By the way, possum pie made the cut.

And so it is with toxic plants, both forage and weedy species — dilution is often the solution. In the case of toxic weed species, it's sometimes elimination (the church's approach).

Though it’s uncommon to hear about catastrophic death losses within a cattle herd due to toxic plant consumption, individual animal deaths and those that just show clinical signs of poisoning occur much more frequently. Livestock poisoning from plant consumption comes in a variety of shapes and sizes.

Jaymelynn Farney, Kansas State University extension beef systems specialist, recently noted that there’s still a lot to learn about how and when livestock poisoning from plants occurs. She made her comments while presenting for a Great Plains Grazing webinar held last week and discussed some common forage species that are a concern for causing livestock poisoning.

Beginning with hairy vetch, Farney described grazing the familiar forage legume as a “roll of the dice.”

“On our research farm, we grazed a hairy vetch and tall fescue pasture for several years and had no problems,” she related. “Then in the fourth year, we had three cattle come down with hairy vetch toxicosis. Two of them passed away and the other one survived but lost her calf.”

The exact cause of hairy vetch toxicosis is unknown, though there are several theories as to the chemical compound responsible; calcium cyanamide is thought to be the primary culprit. Even more perplexing is the fact that not all animals are equally affected. “Black pigmented or older animals are ones most often susceptible to poisoning,” Farney said. “Death usually occurs due to kidney failure, but this is after the animal develops a severe dermatitis brought on by a hypersensitivity to sunlight. Once the dermatitis is noticed, it’s usually a short amount of time before the animal dies. For those animals that contract hairy vetch toxicosis, there is a 50 to 100 percent mortality rate.”

Some researchers surmise that hairy vetch toxicosis might just be an allergic reaction with some animals being very sensitive, while others are only slightly sensitive. All stages of plant growth can cause toxicosis, but there is no means to test either plant or animal to know if or how severe the problem may become.

Farney is of the opinion that the susceptibility rate in cattle is low just because we don’t see a lot of cases. “But when we do,” she said, “it can be devastating.”

The Kansas State beef systems specialist thinks we still have a lot to learn about nitrate poisoning. Farney discussed a number of nitrate accumulating plant species such as brassicas, amaranth, pigweed, cereal grains, forage sorghum, sudangrasses, and millet. Nitrate poisoning can cause reduced performance, abortions, or death in cattle.

“The commonly cited threshold for plant nitrates is about 9,000 ppm (parts per million) of dry matter. Above this level, we usually get concerned,” Farney said. She showed Kansas State research that was done in the drought year of 2012 with brassicas and cereal grain forage where nitrate levels far exceeded the 9,000 ppm threshold through most of the fall. “There should have been cows dying from nitrate toxicity all the way through the first part of November.” That didn’t happen, nor has Farney heard any reports of cattle ever dying from nitrate toxicity while on wheat pastures.

“I think there might be some complexity or variation within our nitrate recommendations for wet forages that are grazed or greenchopped,” Farney said. “They are accurate for dry forage such as hay.”

A Netherlands research summary on nitrate toxicity summarized 40 feeding trials and found that it’s not always as simple as just measuring plant nitrate levels. “Part of what this summary showed is that green forages probably release nitrate into the rumen at a much slower rate than dry hay,” Farney said. “Further, how quickly the animal consumes a given amount of nitrate plays a role. Eating a slug of high-nitrate forage in a short duration is more problematic than consuming the same amount of nitrate over a longer period. This is probably why we don’t always see symptoms of nitrate poisoning when cattle are grazing low dry matter forages like brassicas or for cows on wheat pastures.”

To offset the effects of high-nitrate forage, Farney suggests producers provide plenty of fresh water, dilute the ration with other feeds, and ensure energy, protein, and mineral supplementation are adequate. This is a similar approach to what I took with my grandmother’s cauliflower casserole.

If you’d like to view Farney’s full presentation on potentially toxic forage crops for cattle, point your browser to the Great Plains Grazing website.

Take stock and begin piling Next

Missouri cattleman does it by the numbers Previous