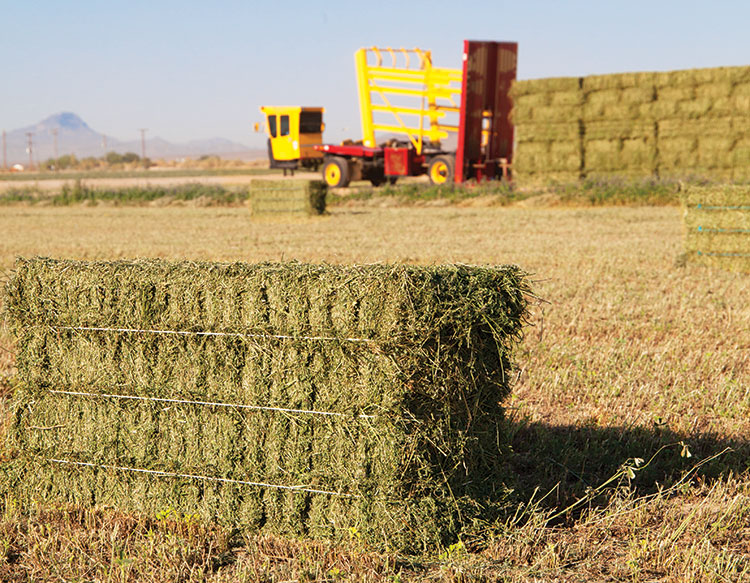 Bales Hay Sales in Buckeye, Ariz., is home to a constant flow of Phoenix-area customers looking to buy 95-pound, three-tie bales to fill their livestock needs. Many of their customers are local horse owners.
This was too good to be true. A long-standing hay business owned and operated by a family named Bales.

“People always ask us if we changed our name to fit the family business,” chuckled Trevor Bales, who is the sixth generation on the farm. “There was no name change involved; it’s just the way it worked out.”

Worked out it has.

Currently, the Bales family operates 1,000 acres of their own land and custom harvests an additional 1,000 to 1,500 acres. Ninety percent of that acreage is alfalfa. Wheat, barley, cotton, ryegrass, sudangrass, and bermudagrass are also grown, helping to break the rotation of continuous alfalfa.

Bales Hay Sales is located in Arizona’s Buckeye Valley, located just southwest of the Phoenix metro area and situated directly north of the Gila River, which provides water for the flood-irrigated crops. 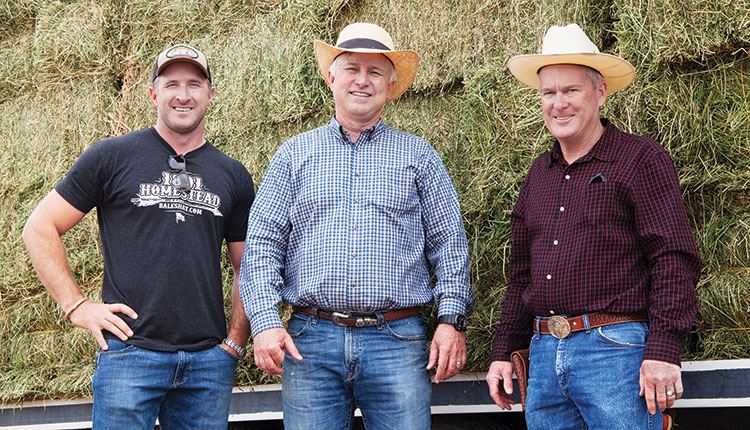 Bales Hay Sales in Buckeye, Ariz., is home to a constant flow of Phoenix-area customers looking to buy 95-pound, three-tie bales to fill their livestock needs. Many of their customers are local horse owners.

“Though we’ve been growing alfalfa here for over 50 years, our retail hay business started about 20 years ago,” Trevor said. “It started small but continued to grow.”

These days, a seemingly constant stream of pickups, cars, and trucks with trailers drive onto the farm’s headquarters to purchase anywhere from a single bale to a semi load of the 95-pound, three-tie bales. The hay inventory is stacked by quality in one of several large hay barns, and Bales employees help with loading.

“I’m still amazed at what some people drive in here with to pick up hay,” Trevor said. “One guy tied a bale to the back of his motorcycle; then there was the time when a person came in and loaded the back of a hearse.” 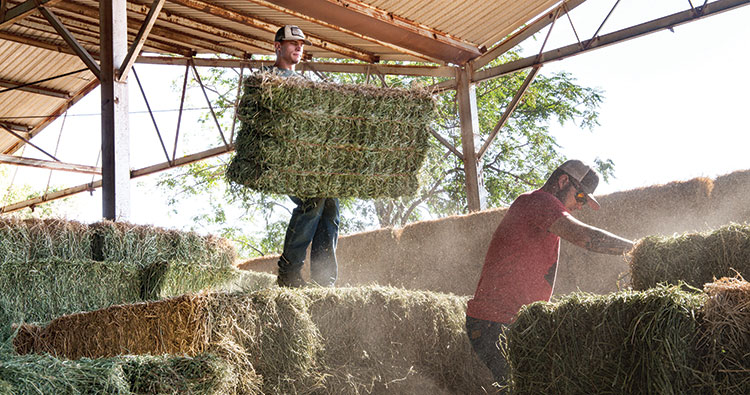 William Beloat initially homesteaded the current Bales farm in 1891. Steve Bales Sr., Trevor’s grandfather who is still active on the farm, is Beloat’s great-grandson. Steven Bales Jr. (Trevor’s father) owns and manages the business, while his first cousin, Brian Turner, acts as the farm manager and is responsible for many of the day-to-day decisions.

How does a brown desert become a green mecca of forage?

“Initially, this land was settled with mostly cattle ranchers,” explained Steve Sr. “There wasn’t a good water supply at that time. Eventually, the Buckeye Irrigation Project was developed and, with the building of dams, a stable water supply became a reality. Currently, the irrigation district also has 54 wells to supplement the surface water,” he added.

In the 1940s, the Buckeye Valley was mostly comprised of cotton farms. At one time, there were also many small dairies and feedlots in the area. Now, much of the land base is used to grow feed for the large dairies that populate the desert countryside. The Bales, however, have chosen to grow hay for the many horse and cattle owners in the region.

Alfalfa acres in the Buckeye Valley have expanded considerably over time. “They always grew it to some degree to supply the cattle feedlots,” Steve Sr. said. “When the water supply became stable and we started to get adapted varieties in the ‘30s and ‘40s, that’s when alfalfa really became a more prevalent crop. Even so, there’s never been as much alfalfa as there is today,” he explained.

Though the bulk of hay production from Bales Hay Sales goes out in small lots and is sold by the bale, the operation also sells semi loads (over 500 bales) by the ton to retail stores in several states and to larger farms. “We picked up a lot of permanent customers during the Texas and Oklahoma drought that began in 2011,” Steve Sr. said. “We also move a lot of hay to New Mexico.”

To round out their customer base, the Bales often sell one or two winter cuttings of alfalfa as greenchop to dairies that are within a 10-mile radius. They hire a custom operator to harvest those crops. Many of these same dairies will purchase baled hay as well.

In addition to alfalfa hay, Bales Hay Sales cuts and bales bermudagrass, ryegrass, and straw, both barley and wheat. A mixture of alfalfa and ryegrass hay is also sold. “Some of our customers prefer the grass or the mixture for their horses,” Trevor said. “They’ve been really good products for us.”

Trevor Bales discusses the day’s plans with Arturo Gonzalez. Gonzalez has been running a bale wagon for the past 32 years, the last 18 for Bales.

Growing alfalfa on the Sonoran Desert is not without its challenges. Though most of the Bales’ water originates from the Gila River, which makes it less costly than deep well-derived water, there are still summer thunderstorms to navigate and untimely gusty winds that will push windrow on top of windrow.

Brian Turner heads up the production side of the business. He noted that they deal with many of the same types of pests as most other alfalfa growers. That list includes gophers, aphids, weevils, stem nematode, and an assortment of weeds. “Herbicide resistant Palmer amaranth has become a real problem,” Turner said. “We don’t use Roundup Ready alfalfa, so we have to rotate conventional herbicide mode of actions to keep the resistance in check.”

The Bales seed their alfalfa in the fall using nondormant varieties. Alfalfa stands are usually kept four years and cut 9 or 10 times per year. The desert climate allows for year-round harvesting, though plant growth slows considerably in the winter. According to Turner, average yields are 9 to 10 tons per acre.

“There’s a big difference in making hay during the summer versus the fall or spring,” Turner explained. “During the summer, we can get the crop to dry in three days and most of our baling has to occur at night or very early morning when we have a little dew on the crop. In the fall or spring, it may take 7 to 10 days to get the crop dry enough to bale; this is when we get a lot of dew and there are extreme temperature swings between night and day,” he added.

Unless water supplies become limited, alfalfa fields are flood irrigated two times between cuttings. Fertilizer applications are made twice per year with phosphorus being the most limiting nutrient.

For some of their older alfalfa stands, the Bales will interseed ryegrass in the fall. This allows them to get three cuttings in the spring of an alfalfa-grass mix.

The Bales cut their hay in a wide swath to expedite drying, then rake before the crop gets too dry. The exception to this approach is when the winter cuttings are made for dairies as greenchop. In that case, the hay is cut into narrow windrows.

The hay is baled with five Massey Ferguson three-tie balers. Hay bales are accumulated using a New Holland bale wagon, then picked up with trucks designed to match the accumulator stack size or loaded with a bale squeeze onto semitrailers. The hay inventory is stored by hay type, cutting, and forage quality. Each stack is clearly marked.

“Because most of our customers are horse owners, we don’t routinely test our hay,” Trevor said. “We do have our own grading system based partly on leafiness and color, two of the primary criteria that most horse owners seem to care about.”

The Bales often try to educate horse owners on the type of hay that is best for their animals. “We try to tell them that they don’t need our absolute best alfalfa for their pleasure horses,” Trevor said. “More and more horse owners are finding that they really like the alfalfa-ryegrass mix or even the pure bermudagrass hay.”

That visual evaluation approach is in contrast to hay sold to large dairies. “Often, they know what they want and will request a forage test,” Trevor said.

Turner also noted his pleasure with the strong hay export market in recent years. “Those strong exports have really buoyed hay prices in the West,” he said. “It’s really helped us even though all of our hay is retailed.”

Make no mistake; Bales Hay Sales is a big operation by any definition. After all, they have 21 full-time employees who range from hay loaders to mechanics and irrigation workers. But going to the farm to pick up one bale or a trailer load somehow still offers the feel of a small family-run business. It’s a unique experience that people seem to look forward to. It’s almost as if you’re a customer, you’re a part of the family.

“We have two priorities here,” Trevor explained. “The first one is safety for our employees and customers. A 95-pound bale can do a lot of damage if it hits you on the head or rolls up your leg. It’s not easy loading these bales when it’s 110°F outside.”

The second priority is customer service. This one isn’t surprising given the multitude of people who roll onto the farm daily to pick up their hay supplies. Each spring, Bales Hay Sales also holds a Customer Appreciation Day that features a lunch, product discounts, and giveaways.

At the farm’s office and small retail store, customers can pick up other feed supplies such as bagged grains for their horses and chickens. The store also sells dog food, beet pulp, mineral, salt blocks, and unique items from the 1891 Homestead clothing line. The latter is a side business that Trevor started “for fun.” The farm also offers a small petting zoo for visitors and customers.

In addition to customer service, the Bales family is also actively involved in the community that their family has called home for over a century. Earlier this year, the Arizona Agricultural Education/FFA Foundation named Steve Jr. their state’s Agriculturist of the Year.

Trevor, who was recently married and is a graduate of Texas Christian University with a degree in business communications, is the next generation of Bales to service Buckeye Valley livestock owners. It’s no surprise that the amiable young farmer plays a lead role in the business’ customer relations. “We’re always learning,” he said. “Every year we try to implement something new.”

Farming is often cited as being difficult because of the multitude of hats that need to be worn . . . from manager to mechanic to manure shoveler. Dealing with the public on a retail level is not a business component that most farmers or ranchers would necessarily welcome or want. But the Bales family has done just that. They’ve embraced the opportunity and by all measures created a successful business model, turning hay buying from a necessary task into a pleasurable experience.

This article appeared in the November 2018 issue of Grower on pages 6 to 8.

They managed through the drought Next