A lifelong learner and teacher of grazing 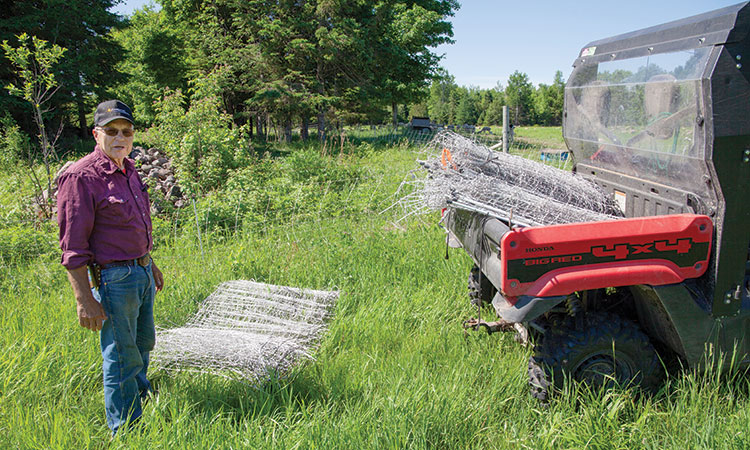 Ben Bartlett can share a lifetime of grazing experiences from his farm and those of others. “There are no limits on how things can be done,” said the retired extension agent who still farms in Michigan’s Upper Peninsula.
He’s a farmer. An educator. A learner. A world traveler. And also a Yooper.

That latter résumé-building item puts Ben Bartlett into a hearty and exclusive class of people who call Michigan’s Upper Peninsula, or the U.P., home. Bartlett knows this unique geography better than most; he has spent the better part of a lifetime raising sheep and cattle on grass while traveling throughout the U.P. to help others do the same.

Bartlett and his wife, Denise, own and operate Log Cabin Livestock, a 700-acre diversified farm near Chatham, Mich. The region receives about 160 inches of snow per year. The growing seasons are short, and the summer hours of sunlight are long, but Bartlett has perfected a system that helps him harvest as much grass (and sunlight) as possible. He did intensive grazing management before most people could even define the term. “It wasn’t wisdom that got us into it but rather necessity,” Bartlett said.

How it all came down

After obtaining a degree in veterinary medicine, Bartlett worked in Japan and Korea managing cattle shipments and designing facilities. It was there, in 1973, that he worked with colleagues from Australia who described new fencing technologies that were being used in their home country.

Returning to Michigan after three years overseas, Bartlett said he and his wife set up a “house of cards” cattle operation in Lower Michigan, leasing land and grazing contracted cattle owned by another individual. “It was doomed for failure, and it did when promises got broken,” he said.

“We had no money, three young children, and 10 beef cows of our own,” Bartlett noted of the tough predicament. “About that time (1977), the managerial position at the experiment station in the U.P. became available. I got the job and moved the family up here. With 10 beef cows, we rented a farm that was owned by a dentist who also had 20 sheep on the place. We made a deal that we could bring our cows, and in return, we would care for his sheep,” he said.

Three years later, Bartlett and his wife bought the farm from the dentist. It’s part of the same farm that he
currently operates.

Speaking about those early days, Bartlett said, “We knew my job wasn’t going to pay for the farm, so we started raising sheep. Also, Denise went back to school and got a master’s degree in library science, and then she started working at the local school.” These days, Denise still takes an active roll in caring for lambs and helping to make hay.

“Those first few years we were lost souls, trying to figure out when was the best time to lamb. We didn’t have enough pasture for the sheep so we rented the neighbor’s field. That turned out to be our intensive grazing management epiphany,” he recalled.

Bartlett explained that the rented farm wasn’t fenced. He only had enough plastic netting to put up and contain his sheep for one day, mandating that he move the animals (and his netting) every 24 hours. It was a chore of necessity, not design. However, in doing this he noticed how uniform the pastures were eaten and how fast the regrowth came back. He then recalled his earlier discussions with the Australians while in Korea who described a similar system that they were using.

One Sunday, Bartlett decided to move the netting after attending church, at 11 a.m. rather than the usual 8 a.m. When he did this, the grass in the paddock from which they were moved turned brown and remained that way for a period of time. “Even though there was just a 3-hour difference, it was my first lesson in overgrazing,” Bartlett said.

In 1983, a year of tough economic times, a university reorganization effort occurred and Bartlett became Michigan State University’s dairy and livestock agent for the entire Upper Peninsula. He held that position until he retired in 2011. 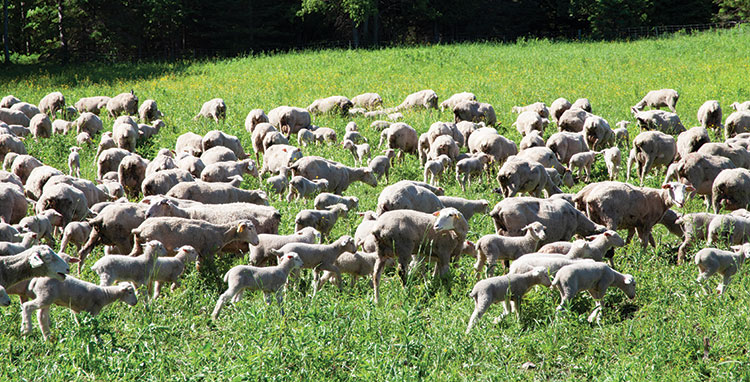 Since those early years, Bartlett never stopped building and improving his own operation. During the growing season, he currently grazes 400 ewes, 650 lambs, and 100 Holstein steers. “I would run camels if I could get them merchandised right,” Bartlett chuckled.

The home farm consists of about 300 acres of permanent pasture. “This is great forage-growing country,” Bartlett said. “But farming had to fit our job schedules, and we had to pay the bills. We tried to minimize our winter work and accentuate summer. Essentially, we had to merchandise our grass.” 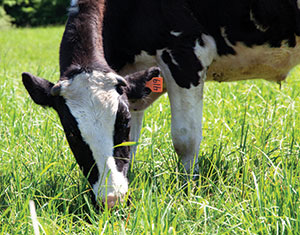 Bartlett grazes Holstein stockers during the summer as a means of diversification
Bartletts raise Polypay-cross lambs and try to keep their flock’s lambing rate high, around 1.8 lambs per ewe. In mid-November, he puts together a semi-load of feeder lambs and auctions them off. “We have no local markets for lambs up here and not quite enough growing season to finish them out on grass,” explained Bartlett. The Holstein stocker steers are purchased in the spring and sold in the fall as feeders.

The U.P. is both blessed and cursed from a forage production standpoint. Though the growing season is short, growing conditions are ideal for high-quality forage with long days and moderate summer temperatures. “Orchardgrass loves this country,” Bartlett said of his primary pasture grass. Kentucky bluegrass also performs well.

Each year in the spring, the long-time shepherd no-tills red clover into about 50 acres of pasture on a rotating basis. He also establishes turnips for high-quality fall forage to put some additional gain on the lambs. Depending on the year, Bartlett can graze until mid-November or early December. Through the winter, the only livestock to care for are ewes.

The recent industry interest to help better understand and improve soil health hasn’t escaped Bartlett. He doesn’t use any commercial fertilizer on his home pastures. Rather, he relies on compost and manure deposition.

Bartlett shared his experience with a Sustainable Agriculture Research and Education (SARE) research project he undertook recently comparing soils from an exclusion area in selected paddocks to areas where grazing was allowed. Two to three days after the animals were removed, he was able to document higher carbon dioxide production on the grazed area compared to the ungrazed control. “Grazing was actually stimulating soil life, and it was an immediate response,” Bartlett noted.

“We need to both move water into the soil but also hold it there with good organic matter and aggregation,” Bartlett said. “Nothing does that like forage crops, which are capturing sunlight throughout the growing season.”

With an average total snow accumulation of nearly 14 feet per winter, Bartlett needs a reliable hay source. “Sheep require a higher quality hay supply than cattle,” Bartlett said. “I just can’t afford to have bad hay, so I make it myself.”

Like many humid-region operators these days, Bartlett makes both dry hay and baleage. “The introduction of the round baler was a turning point in the forage industry, but so was the ability to put up round bale silage,” he said. “It gives the small farmer an opportunity to put up higher quality feed.” He owns both a baler and wrapper.

Bartlett cuts and bales about 300 acres of grass per year with most of that being rented land that is too far away to graze. The hayfields are usually cut once per season.

The dedicated hay acreage is comprised of rented fields away from the home farm. “We just found that our most economical way to do this is to rent a grass field, which we can do for less than $20 per acre, put some urea on early in the spring, then get our one cutting. We don’t break any yield records, but we try to cut early to get high quality,” he explained. 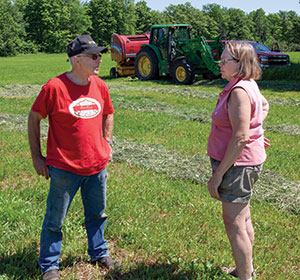 Bartlett and his wife, Denise, work to put up high-quality hay for their sheep flock.

During his long extension career, Bartlett was tasked to provide information and guidance to all types of livestock producers. He knew that he couldn’t be an expert in everything, so he really decided to focus on improving grazing systems. “In this way, I could help all types of operations,” Bartlett said.

“My extension career was rewarding and being able to run my farm at the same time was a benefit,” he explained. “Often, I would test practices and theories on my farm before discussing them at extension meetings. In those early years, when intensive rotational grazing was first taking hold, a lot of learning was done farmer to farmer,” he added.

Bartlett’s knowledge of grazing systems and components didn’t stay hidden in Michigan’s U.P. Over time, he became a highly sought after speaker for meetings and conferences throughout the United States. He has also authored a number of extension bulletins and publications.

International travel to further his own knowledge and that of others
also was a unique component of Bartlett’s extension career. At one point, he spent a month in Argentina on an Eisenhower Fellowship. He’s also traveled or made presentations in several European countries, Australia, New Zealand, Tanzania, South Africa, Kenya, Kyrgyzstan, and most Canadian provinces.

More than one way

When asked what he thought was most lacking in current grazing systems, Bartlett silently reflected for a moment and then said that he thought not enough graziers were outcome focused.

“Not having a goal or plan often leads to failures,” Bartlett explained. “You have to know what you’re trying to accomplish. For instance, is animal performance the primary goal or is it your own quality of life? Maybe it’s to maximize plant and soil health. You can’t necessarily do all of those things at the same time. The right way to graze is going to depend on what you’re trying to achieve. In fact, goals can be different from paddock to paddock.”

Bartlett continued, “There are three things involved with grazing . . . the plant, the animal, and yourself. There’s not a right or wrong way and we certainly have to make trade-offs between these three components. I’m not sure many people look at it that way,” he added.

The straight-to-the-point, retired extension agent concluded, “There are no limits on how things can be done. We need to follow some biological rules, but otherwise it’s whatever it takes to pay the bills.”

An enduring relationship fuels their success Next

The Hay Lady in Pennsylvania Previous