By Jimmy C. Henning
The author is a professor and extension forage specialist with the University of Kentucky, Lexington. 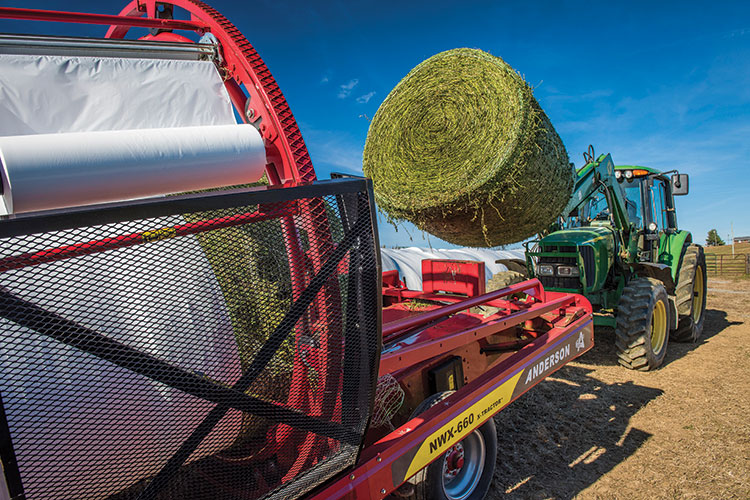 Baleage, or making silage in bales of wilted forage that are wrapped in plastic to create an anaerobic environment, allows for the more timely harvest of forage crops. It produces consistently higher quality stored feed than haying, which requires longer periods of good curing weather.

The key to this process is wilting the forage sufficiently to achieve the recommended moisture content and adequate fermentation within the wrapped bales. Good preservation depends on achieving anaerobic conditions and rapid fermentation of available carbohydrates to form lactic, acetic, and propionic acid.

The accumulating organic acids lower the pH, ideally to a level of 5 or below (slightly higher in legumes). This acidity prevents spoilage during storage and when re-exposed to air at feeding. Well-fermented baleage is generally accepted to have more than 3% lactic acid and less than 0.1% butyric acid on a dry matter basis.

As simple as this process sounds, baleage can and does go bad as a result of improper fermentation. When baleage is ensiled too dry, fermentation is incomplete and good storage relies on achieving and maintaining anaerobic conditions. In the case of high-moisture baleage (70% and above), and especially when forages are mature and lack sufficient fermentable carbohydrates, bales do not generate enough lactic acid to prevent a secondary fermentation, usually by clostridial bacteria.

Clostridia metabolize available carbohydrates, lactic acid, and protein, often producing butyric acid and sometimes other toxins depending on the species of clostridia present. The most feared of these bacterial types is Clostridium botulinum, the species responsible for the production of the botulism toxin.

Ordinarily present in low numbers on forage, clostridia bacteria are introduced into baleage most often from soil or applied manure. Soil is most commonly introduced into baleage from aggressive raking, but driving rain can also splash soil onto swaths and windrows. Feeding poorly fermented, high-moisture baleage can be costly. Baleage that has undergone clostridial fermentation can have effects ranging from lowered feed intake to the introduction of intestinal toxins such as botulism. Nearly every year, cattle are lost to botulism toxicity from poorly fermented baleage. Identifying problem baleage and preventing cattle losses would be highly beneficial.

A survey of Kentucky baleage was done in 2018 and 2019 to determine the fermentation characteristics of various baleage lots. In 2018, samples were collected on random lots of baleage across central Kentucky and analyzed for forage quality, pH, and fermentation profiles in a commercial certified laboratory.

In 2019, additional data was collected on general production practices, such as equipment type and the interval between cutting and baling. All lots were allowed to ferment for at least four weeks before sampling. Fermentation results were similar in 2018 and 2019, so only 2019 data is presented. 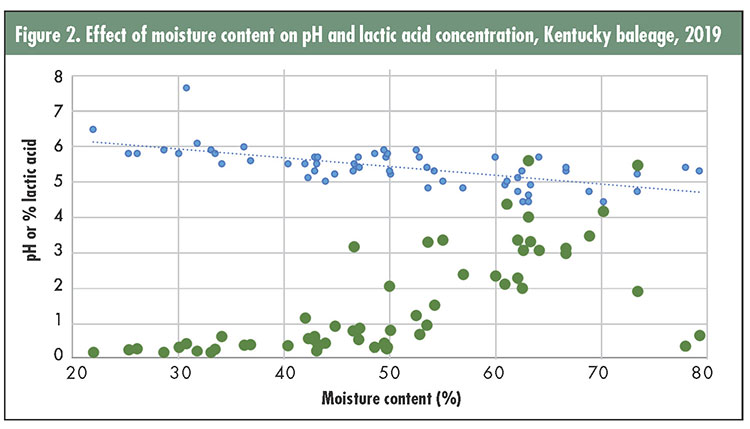 Similar to most baleage research, moisture content at baling was the major factor impacting lactic acid and butyric acid production (Figures 2 and 3). Only when moisture approached 60% did samples in this survey achieve 3% lactic acid and a pH of 5, which are the generally accepted threshold values for good fermentation. 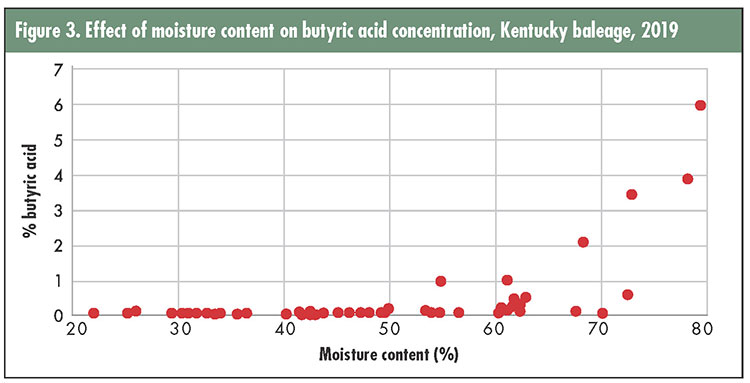 Fermentation characteristics remained good for most samples when moisture content was between 60% and 70%, but the results became less predictable. Above 70% moisture, elevated butyric acid production was common. Lactic acid values generally declined when moisture was above 70%, presumably due to its metabolism by clostridial bacteria.

Most producers had some type of silage baler or baler adapted to handle silage. All used wheel rakes, but mowers were a mix of conditioning and nonconditioning types. Wilting time was difficult to summarize but varied from hours to a day or more depending on conditions. All producers were using at least four layers of plastic, and most used six or more. All of the high-butyric samples were high-moisture small grains. None of the producers used any form of silage or baleage bacterial inoculant.

Moisture was the key

In 2019, baleage needed to be 55% moisture or above to consistently produce adequate lactic acid. All but one sample at or below 60% moisture content had acceptable butyric acid levels. Work by Kevin Shinners and colleagues at the University of Wisconsin found that baleage at or below 60% moisture and with less than target lactic acid concentrations can still be stable during storage and feeding; however, this assumes anaerobic conditions are maintained until feeding and bales are consumed within one week of removing the plastic.

Baleage with moisture contents between 60% and 70% produced high quantities of lactic acid (1.9% to 5.8%), but 10 of 14 samples also had butyric levels greater than the desired 0.1% or less considered optimum. Above 70% moisture, all samples had excessive levels of butyric acid.

Butyric acid was present (0.23% to 6%) in every lot of small grain baleage with moisture levels above 60%. The type of crop and season of production also contributes to risk; wet, small grain baleage is often produced in early spring when lactic acid bacteria numbers and lower temperatures likely limit optimal fermentation. Baleage inoculants would have likely improved fermentation in these cases.

Ash content is of practical concern since it is a measure of potential clostridial contamination of forage from soil. Normal ash concentrations range from 6% to 8%. In our 2019 study samples, ash content ranged from 7% to 15% but was not correlated with butyric acid production.

There was evidence that the ash effect might be seasonal. Two samples, both above 14% ash content, were spring-produced small grain baleage that had greater butyric acid than a sorghum-sudangrass sample from the same farm and field (0.44% compared to 0.01%). High ash content alone is not predictive of butyric fermentation but should still be considered a risk factor.

All of the well-accepted practices for making baleage were confirmed in this survey. Doing things such as cutting on time, wilting forage to a proper moisture content, making dense bales, and achieving and maintaining anaerobic storage conditions are all extremely important.

Testing baleage for forage quality and getting a fermentation profile is also highly recommended. Testing will not predict actual botulism toxin formation, but it will reveal risk factors that make it more likely. These include a high moisture content, an elevated pH, high levels of ash, and significant butyric acid formation.

Although the presence of butyric acid above 0.1% is not necessarily a guarantee of botulism issues or poor performance, it should be a marker for potential feeding problems, including botulism. With a comprehensive forage test in addition to an organic acid/fermentation profile, feeding problems due to poor fermentation become preventable, or at least more predictable.

This article appeared in the February 2020 issue of Hay & Forage Grower on pages 6 and 7.