Another plea for change 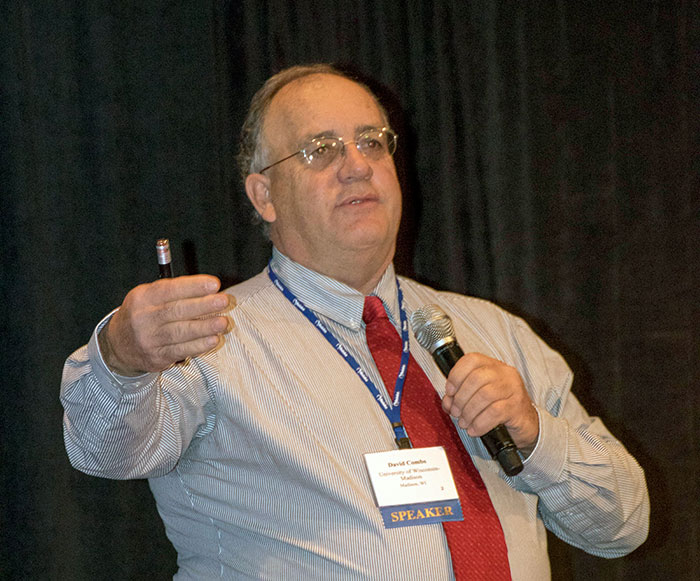 You’ve read before in this space about my opinions regarding the current USDA market hay grades and why using them is the equivalent of calling your neighbor on a party line rotary-dial phone.

There’s got to be a better way forward and others have made the same assertion.

We can now throw a dairy nutritionist into the mix of those promoting a call to action. Dave Combs of the University of Wisconsin outlined his reasons for change at the California Alfalfa & Forage Symposium held in Reno, Nev.

“The current system for pricing and evaluating forage quality presents a challenge for hay growers who are considering whether or not to produce reduced-lignin alfalfa,” Combs opined. “Both the Western hay TDN equation and RFV (relative feed value) only consider fiber content rather than also taking into account the digestibility of the fiber,” he added.

Alfalfa is often included in dairy rations to bring NDF into the ration; hence, the fiber itself has value, explained Combs. That value is enhanced when the fiber is more digestible. If alfalfa is higher in digestibility, it can displace other high-fiber feeds.

Fiber digestibility is as variable as the fiber content itself. Though Midwest alfalfa averages 42 percent digestibility and Western alfalfa about 46 percent, the range in values span 25 to 70 percent.

“A 1 standard deviation change (about 4 percentage units) from the mean can change the TDN by 2 percentage units,” Combs said. “That may be enough to change the market grade by one class and raise or lower the value of that hay by $20 per ton. It’s not a small impact,” he emphasized.

Combs explained that fiber digestibility is affected by several controllable and uncontrollable components. Of primary importance is the growing environment, factors such as temperature, moisture, and sunlight intensity. Another critical factor is plant maturity, though the dairy scientist noted that even immature alfalfa samples have a wide range of digestibility values. Finally, there is genetics, especially with the reduced lignin varieties.

“In our limited tests with both Alforex’s Hi-Gest and Forage Genetics’ HarvXtra, we saw cases where ADF (acid detergent fiber) was the same as conventional varieties but there were large differences in fiber digestibility,” Combs related. “Using the current TDN-based market grades, the grower isn’t going to be justly rewarded for using a reduced-lignin variety.”

It’s one thing to complain about the current system (as I usually do), but Combs offered a new plan going forward. Though not perfect, it does bring into play fiber digestibility using the current terms that comprise the USDA market grading system.

Combs is suggesting a “TDN adjustment.” He used an example of a reduced-lignin alfalfa containing 28 percent ADF, 36 percent NDF, and 52 percent NDF digestibility. Under the current system, the TDN would be 54.5 percent (see figure).

Combs further suggested that a similar approach could be taken with RFV using the TDN adjustment for fiber digestibility and accounting for the relationship between TDN and RFV.

Combs’ proposal accomplishes a couple of things. First, it maintains nomenclature that hay producers are accustomed to using. More importantly, it rewards value to hay with higher fiber digestibility — something that the rest of the forage and livestock industries have already been doing for many years.

Bringing alfalfa to market takes many years Next

Where do you cut costs in a down year? Previous