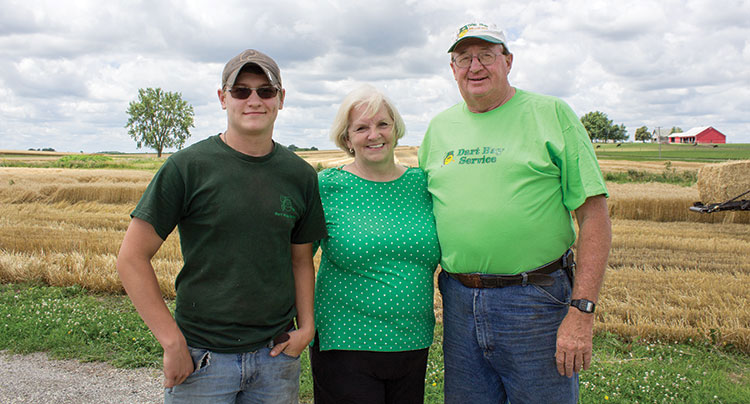 The Tombaugh farm operation has diversified and all members of the family are involved. From left, Tyler (son), Sandy (wife), and Ron Tombaugh.
Ron Tombaugh’s entrepreneurial nature helped him successfully integrate a haying and trucking business.

In Streator, Ill., the epicenter of corn and soybean country, Tombaugh bought his first round baler for custom work in 1973. Three years later, his family owned 13 pieces of New Holland equipment, so Tombaugh and his dad decided to open a New Holland dealership in the Streator area; at the same time, Tombaugh was still working on his general agriculture degree at the University of Illinois.

Upon graduation, he moved back to the farm full time and in five years began his successful career in the hay business with the purchase of his own baler and bale wagon. He named his business “Dart Hay Service.” Along the way, Tombaugh had also been brokering hay, which proved to be helpful in his custom haying business.

In 1992, Tombaugh bought a big square baler. “There was a time when we did small squares, big squares, and we even wrapped some,” Tombaugh said. However, he realized that the market was in big square bales, so he decided to make that his main business. He appreciates the big balers because they require less labor, work faster, and handle larger windrows entering the baler so more leaves are saved. At that time, he was baling hay on 300 acres. 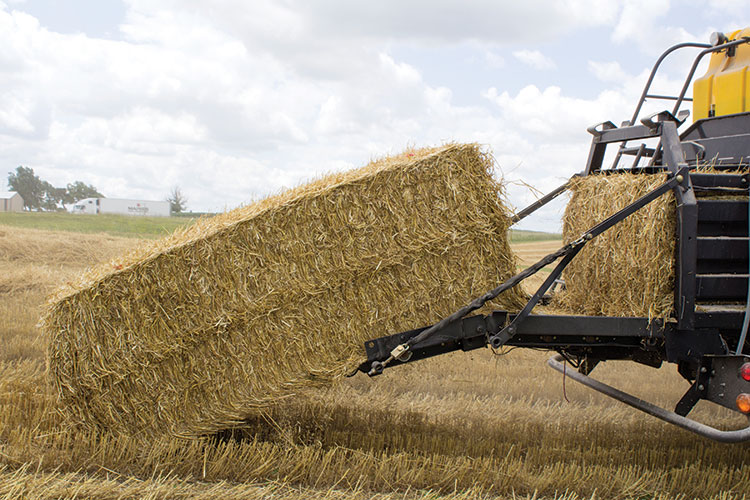 Ron Tombaugh begins another day of baling wheat straw. The hay business “lifer” noted that straw gave his business a big lift when hay acres became more difficult to procure in the heart of grain country.

Straw baling began in 2003 when a friend came up short on a wheat straw contract for an Illinois mushroom farm. Tombaugh stepped in, filling the contract and establishing a new branch of his business. The following year he baled 2,700 acres of straw. One of his biggest years was 2005, when he baled 700 acres of hay and 5,000 acres of straw. “An important part of my expansion was getting into straw,” he said.

When the grain prices and markets expanded from 2008 to 2014, a number of landlords didn’t want to make long-term commitments to hay. As a result, Tombaugh decided to downsize a bit. He currently bales 700 acres of straw and 180 acres of alfalfa.

These days, Tombaugh operates with a 16-foot self-propelled disc mower, a hay rake, and a large square baler. The business is now a two-person operation run with his son, Tyler, who is attending Joliet Junior College this fall studying agriculture business and mechanics. “I would like to come back and help Dad in the long run and maybe even start my own business,” Tyler said.

On his own farm, Tombaugh grows 180 acres of alfalfa, 150 acres of wheat, 250 acres of corn, and 350 acres of soybeans. Making the highest quality hay possible has always been of utmost importance. At the 2011 World Dairy Expo, one of his samples placed second in the World Forage Superbowl contest. He firmly believes that “quality hay will always sell.” Most of Tombaugh’s hay goes to dairies, but some is fed to beef.

Tombaugh also runs his own trucking business. “It made sense for me to get into trucking shortly after starting the custom baling business because I already did all my hay and straw deliveries,” Tombaugh stated.

At one point, he had four trucks and several drivers. However, he decided to downsize to two trucks so that he could make all the deliveries. Over the years he has hauled loads as far as Alabama, Texas, New Jersey, and Georgia, but most of his deliveries are in Illinois and neighboring states.

“I always try to deliver the hay so that I can talk face to face with buyers, and that way if there are any issues we can get them resolved right away,” Tombaugh said. To him, it is all about building relationships and personal communication. He says it is also very rewarding to deliver his own bales.

Into the future, he would like to continue baling about the same amount of hay and straw that he is currently. His main goal will remain the same, “baling everything efficiently and producing the highest quality possible.”

Ron gained another business partner when he married his wife, Sandy, 12 years ago. They adopted Sandy’s grandson, Tyler, shortly after getting married.

A unique side business that the couple has started together is making and selling miniature 1-pound bales. Sandy noticed the mini bales at a craft fair and they caught her interest. She located their first handmade baler in Texas that created 5- by 7- by 12-inch bales. They currently sell the bales at craft fairs and by word of mouth. People use the bales for everything from decorations to rabbit feed.

Sandy runs a commercial T-shirt embroidery business that she started with a partner in 2015. Ron and Sandy are in the process of building a retail store to sell the bales and house her embroidery business. The couple also recently got started with vermiculture and is hoping the new store will provide a place to market worm casings.

This article appeared in the February 2017 issue of Hay & Forage Grower on pages 6 and 7.