By Melissa Beck
The author is a freelance writer and stocker-cattle operator from Hope, Ark.

Historically, producers are warned that it takes two to three years to establish native warm-season grasses. Research at the USDA Plant Materials Center in Booneville, Ark., and the University of Tennessee seem to indicate this isn’t necessarily true, and in reality these grasses may require a much shorter establishment time.

Native warm-season grasses are perennial bunch grasses that grow upright and make excellent livestock forage as well as wildlife habitat. They include big bluestem, little bluestem, switchgrass, indiangrass, and eastern gamagrass, among many others. Often referred to as “prairie grass,” these grasses were common throughout the United States and Canada and were inhabited by native peoples who hunted the immense herds of bison, deer, pronghorn antelope, and elk that grazed and roamed the prairies.

“Selection of warm species really depends on your objectives,” said Patrick Keyser, professor and director of the Center for Native Grasslands Management at the University of Tennessee. “Typically, we recommend a mix of big bluestem, little bluestem, and indiangrass because they are complementary in their production and have higher gain rates for growing livestock.”

Keyser said a typical rate of gain for a 120-day grazing season is 2.2 pounds per day for this mix of warm-season grasses alone. He said a producer could double the stocking rate with switchgrass, the cheapest rate of gain for these native grasses, and expect around 1.75 pounds of gain per day. Switchgrass also has the best water use efficiency of the warm-season options.

There are some advantages to growing warm-season grasses; perhaps the most appealing is the relatively low inputs required to produce forage. They also require less fertilizer and are more drought tolerant than introduced species.

On the other hand, warm-season grass species are more difficult to establish than cool-season perennials, require intensive management, and intentional weed control, particularly at establishment. Diligent oversight is required to maintain the stand. These native grasses do not tolerate overgrazing like introduced species and have a short grazing season, requiring a rest period in the fall to restore root carbohydrates.

Keyser says that warm-season grasses require as much as six weeks of rest in early fall to build up energy reserves. “These grasses respire all winter and, therefore, need energy reserves for that as well as for the green up in the subsequent spring.” The rule of thumb to “take half, leave half” is important for stand maintenance. Furthermore, seed costs can be prohibitive.

Planning is essential when converting to native warm-season grasses. John Jennings, extension forage specialist at the University of Arkansas, recommends starting the process a year in advance of planting.

“Converting old pastures to warm-season grasses starting in late winter for spring planting can be accomplished but requires a very intensive program of repeated herbicide applications, possibly burning of thatch, and a pre-emergence herbicide application (for certain species) after planting,” Jennings explained.

He continued, “The best situation for converting to warm-season grasses is on an unproductive field that needs to be renovated anyway, or for landowners with strong wildlife interest where they will manage the grass as forage and wildlife habitat. These forages aren’t a fit for everyone but are very productive with lower production costs than bermudagrass if recommended practices are followed.” 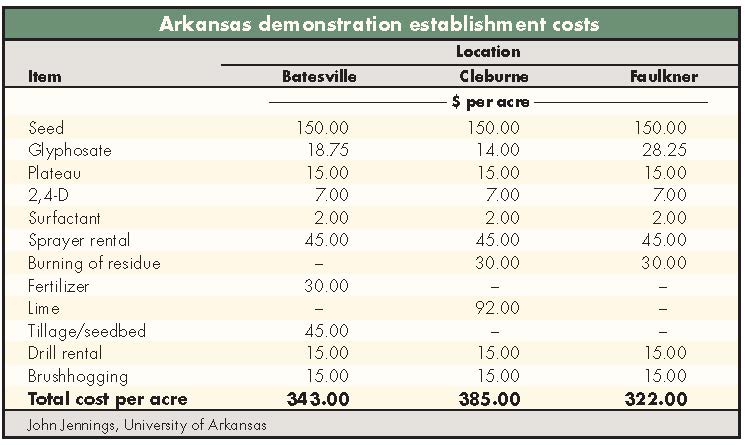 Jennings cooperated with Keyser to conduct three successful native warm-season grass establishment demonstrations in north central Arkansas; one was at the Livestock and Forestry Research Station at Batesville, one on-farm in Cleburne County, and another on-farm demo in Faulkner County. The demonstrations ranged in size from 10 to 15 acres. The two farm sites were no-till planted into an herbicide-killed sod, and the Batesville site was on a prepared seedbed. To prepare the sites for planting, they were sprayed with 2 quarts per acre of glyphosate in mid-April with a second application before planting.

The no-till drill was equipped with a native grass seed box and larger tubes designed to accommodate the fluffy native grass seeds. It was calibrated to deliver 10 pounds of pure live seed per acre. The disk openers barely cut the soil, and the press wheel was adjusted with more pressure. Many seeds were visible in the row, pressed into the prepared soil bed, with good soil-to-seed contact but without planting too deep. The same seed mix and planting rate of pure live seed were used at all three sites: 8 pounds per acre of OZ-70 big bluestem, 1 pound per acre of Aldous little bluestem, and 1 pound per acre of Osage indiangrass.

Imazapic herbicide was applied at 8 ounces per acre after planting to provide pre-emergence weed control. Despite the applications of herbicide, pigweed emerged on all three locations in the summer before the stand was mature enough to tolerate another application of herbicide; therefore, each of the three sites were mowed in July. Once the grass seedlings reached the recommended size, the sites were treated with a broadleaf herbicide.

Twig Satterfield owns the 10-acre plot in Faulkner County and said before he participated in the demonstration his pastures suffered during the 2012 drought. He sold most of his cows, burned the pastures, and was surprised when an unfamiliar grass came in. He called Jennings and found out the burned pastures came back in bluestem. 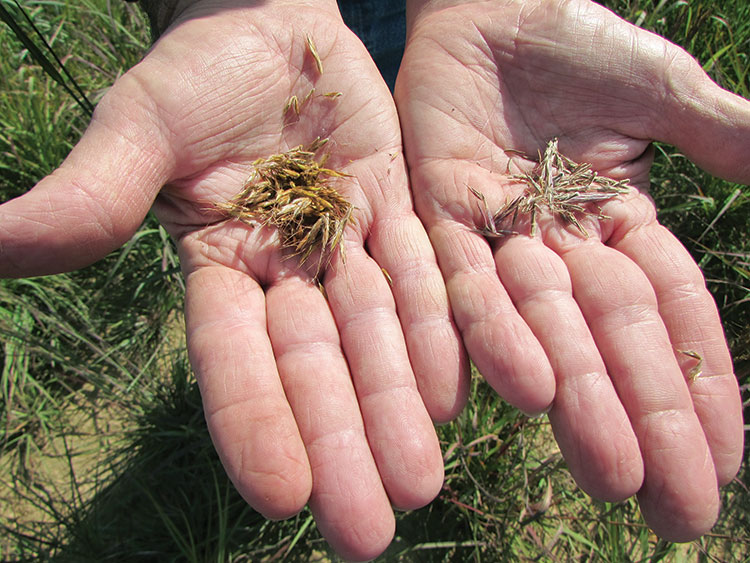 Be patient before grazing

They planted his demonstration plot in late spring and the following August put 35 head on the pasture for four to five days, then grazed it again the following February. Satterfield said that burning down the existing sod at establishment was a game changer. He noted, “The warm-season grass pastures are holding up to our program. We rotationally graze our cows, moving them every two to seven days. They are spoiled rotten, standing at the wire and bellowing when it’s time to move.”

“We typically recommend withholding utilization until 12 months after establishment,” Keyser said. “You can use haying or grazing to manage weeds in an immature stand, but the grazing needs to be for a very short interval,” he explained.

Jennings observed good stands were established at all three sites with all October stand counts of 90 percent. Rainfall was optimum until mid-August, and the weed control held well through most of the summer.

For those interested in converting a pasture to native warm-season grasses, begin planning at least a year ahead of planting. Consider the species that best fit with production goals, and be prepared to manage the grasses with a higher canopy, around 10 to 25 inches in height. Finally, allow the pasture an adequate rest period to maintain the vigor and persistence of the stand.

Searching for 365 days of grazing Next