Searching for 365 days of grazing

By James Rogers
The author is an associate professor with the Agricultural Division at the Samuel Roberts Noble Foundation.

In 2015, the Noble Foundation undertook a foundation-wide research initiative called Forage 365 with the main objective to develop forages and grazing systems that provide grazeable forage year-round. Within this initiative, there are several projects taking place across the three operating divisions of the Noble Foundation. Projects range from basic research in plant nutrient-use efficiency, drought tolerance, and soil microbes, to applied research involving cow-calf winter forage systems and the use of cover crops in winter pasture stocker systems.

In the Noble Foundation Agricultural Division, there are two Forage 365 grazing research projects being conducted.

The first is a cover crop study that addresses the question of what effect will a cover crop grown during the summer have on subsequent winter pasture production? A common forage production system in the Southern Great Plains is to plant wheat or other types of cool-season annual small grains in late summer, then graze the produced forage with stocker cattle through fall and winter to graze out of the pastures in early spring. During this time, stocker cattle will typically gain an average of 2.5 pounds per head per day on winter pasture with no additional supplementation.

Traditionally, land area used for winter pasture is chemically or mechanically fallowed through the summer months to control weeds and conserve soil moisture. Leaving soil bare through the summer exposes soil to a higher potential for wind and soil erosion, and this perhaps creates a missed economic potential by not growing a crop during the summer.

Interest in cover crops has risen in the past few years and continues due to the benefits producers see in the ability of cover crops to protect soil from erosion. Other potential benefits from the incorporation of cover crops include soil health improvements through additional residue and organic matter, improved wildlife and pollinator habitat through enhanced plant diversity, and elevated soil microbial activity leading to improvements in soil structure and nutrient availability.

To quantify these effects in a winter pasture system, a multiyear cover crop research project was started in the fall of 2015 at the Noble Foundation’s Pasture Demonstration Farm west of Ardmore, Okla. This study involves 100 acres of winter pasture area divided into 20 5-acre paddocks.

These paddocks were randomly assigned to tillage or no-till production practices with summer fallow in the early 2000s. A summer cover crop has been randomly assigned to half of these paddocks, which will allow us to evaluate tillage and no-tillage methods with and without a summer cover crop. The cover crop being used is a multispecies blend of German millet, pearl millet, sunn hemp, cowpeas, soybeans, buckwheat, and grazing corn. Table 1 shows the cropping system timeline.

A large amount of data is being collected during this study to help us understand the biology of the system and quantify cover crop effects on winter pasture production. Sensors are installed at three depths in each paddock to monitor soil moisture

Soil samples are being taken in each paddock to monitor changes in nutrient levels, soil health parameters, soil bulk density, and soil microbial activity over time. Water infiltration rates are being collected at different times each year. Forage mass of the cover crop and winter pasture will be measured as well as the performance of cattle grazing winter pasture. It is also our intent to graze the summer cover crop if forage mass is sufficient to support grazing.

We are now in our second year of evaluating this system. In the first year, environmental conditions were not ideal. Winter pasture was planted the last week of September 2015. The pasture was slow to develop due to dry conditions, resulting in pastures being stocked in December, one month later than the average stocking date. Winter pasture was grazed until early May 2016.

Cover crop planting was delayed to early June due to wet weather conditions followed by extremely dry weather through the summer. We were able to graze the cover crops for a 28-day period in August. Stocker cattle gains on the cover crops were good. As part of a multiyear research trial, environmental challenges are to be expected. As our data bank continues to expand from this study, continue to look for updates. 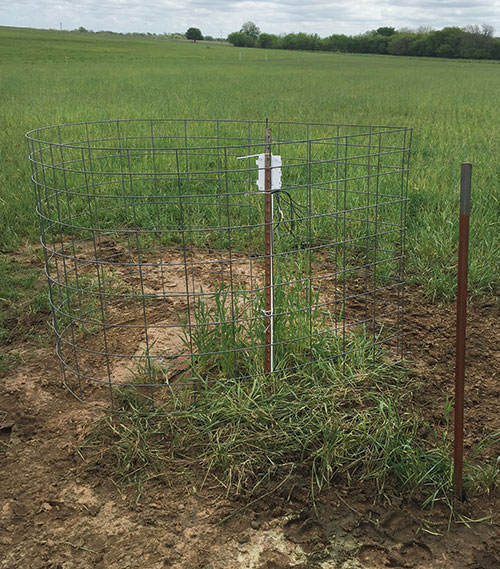 Data loggers like this one record soil temperature and moisture to help researchers quantify the effects of cover crops on winter pastures.

The second Noble Foundation Agricultural Division research study, initiated in 2015, is a cow-calf study. It is documented that the largest yearly expense in maintaining a beef cow is incurred during the winter for feed, and the largest portion of this feed expense is normally hay. In southern Oklahoma and the Southern Great Plains, we are blessed with a long growing season and fairly mild winters.

This cow-calf study is evaluating forage systems to take advantage of these conditions to extend the grazing season and reduce or eliminate winter supplementation. The research is being conducted at the Pasture Demonstration Farm on 376 acres of bermudagrass and includes 90 head of mature Angus cross cows assigned to one of three treatment groups, each replicated three times. Stocking rates across treatments are equal with each treatment area consisting of 40 acres.

Treatment 1: A control treatment, in which cows are allocated to bermudagrass pasture with best management practices employed through the spring and summer. When pasture is depleted in fall or early winter, cows are supplemented with hay and concentrate as needed.

Data collected during this study include cow weight and body condition score, calf weights, forage mass and nutritive value, and all input costs.

In addition to evaluating animal and agronomic performance of both studies, an economic evaluation will be conducted to determine the economic viability of the systems. As we are now only in the second year of both studies, there is very little response data to report, but there will be more to come.

Plan ahead for a toxic fescue makeover Next