The evils of weevils 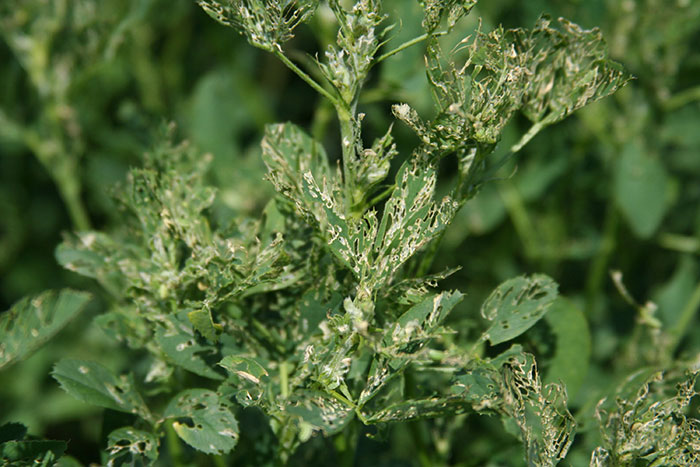 Cows aren’t the only creatures that like to eat alfalfa; count alfalfa weevils in that group as well.

Entomologists across the U.S. are either filing reports of already severe alfalfa damage from weevils in 2017 or are warning of that potential because of early warm temperatures. Unfortunately, the warnings don’t stop after the first cut is made.

Though potato leafhoppers are often cited as the most severe pest that threatens alfalfa, it’s only because of their frequency and duration that earns that moniker. But make no mistake; alfalfa weevils can issue significant damage in a year that favors their survival and development.

They seem to be especially damaging in the mid-South where insecticide treatments are a common occurrence. In the North, early cutting is usually the primary control mechanism.

“Alfalfa weevils have been very damaging in some fields this year,” says University of Kentucky entomologist Lee Townsend. Similar reports are coming from north central Kansas and western Nebraska.

Alfalfa weevils overwinter as adults in areas where there is heavy plant debris. Where winters are more mild, adults may lay eggs in alfalfa stems, and those eggs may survive and begin causing damage during early spring.

Many states track the base 48°F degree days and provide maps or tables that alfalfa growers can reference. For example, here are maps from Iowa and North Dakota.

What to look for

Alfalfa weevil larvae are small, light green worms with black heads and a white stripe down the length of their back. They are most easily confused with clover leaf weevils, which have a brown head and are far less likely to impose economic damage.

There are a couple of basic approaches that state extension entomologists suggest for scouting alfalfa fields. One is to count larvae while the other is to assess damage. Note that damage is most likely to occur first on the warmer, south-facing slopes. 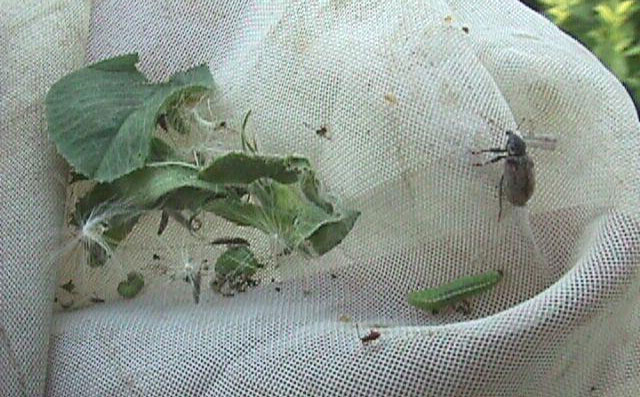 In Nebraska, extension entomologist Thomas Hunt recommends going out in the field with a sweep net when alfalfa is tall enough to determine if weevils are present. If found, he then suggests to carefully cut at least 10 alfalfa stems from five or more randomly selected sites across the entire field. Cut the stems at ground level and then beat them against the side of a deep bucket. Next, count the larvae in the bottom of the bucket and determine the average number of larvae per stem. Finally, inspect the new, folded leaflets for small larvae that may be hiding and still attached to the plants.

Once the average number of larvae per stem is determined, measure stem length to get an average plant height. North Dakota State University entomologists have developed a table to guide producers on the proper course of action based on plant height, larvae (third and fourth instar) per stem, treatment cost, and crop value.

Some state entomologists suggest basing the course of action on the amount of plant damage. In New York and Wisconsin, for example, it’s recommended to take action when 40 percent of the alfalfa stems exhibit signs of weevil tip feeding injury. The injury might range from small shot holes to a completely skeletonized leaflet. Note that the threshold is based on the percentage of stems with leaf damage, not the percentage of leaflets.

If it’s determined that 40 percent stem tip feeding has occurred, then there are two possible courses of control action. If the alfalfa is within seven to 10 days of cutting (early to mid-bud), consider taking an early harvest and then monitor the regrowth for further damage. If it’s still too early to cut, then consider an insecticide application with an appropriate preharvest interval.

Contact your local county extension office or state specialist for treatment thresholds, scouting protocol, and insecticide recommendations for your area.

Once the first cut is made there is still cause to monitor regrowth, especially where heavy infestations are present.

“Weevils that survive to the pupal stage and emerge as adults may congregate under windrows to feed on crown regrowth,” Townsend says. “There may be enough adults and surviving larvae present to justify an insecticide application.”

The Kentucky entomologist suggests keeping a close eye on the rate of regrowth. “Treatment may be justified if there is feeding on 50 percent or more of the crowns or when regrowth is prevented for three to six days,” Townsend notes.

It’s on the tag and in the bag Next