By Kendall Kirk
The author is a precision agriculture engineer and assistant professor at Clemson University in Clemson, S.C. 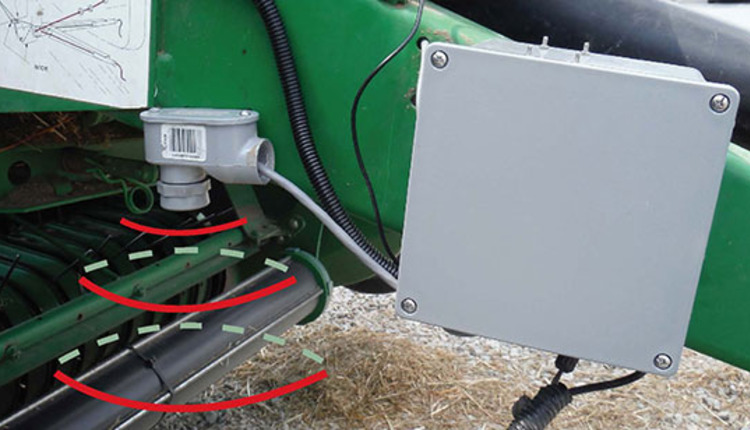 Site-specific and variable rate technologies are widely known and applied today in row crops, in many instances being driven by and evaluated by yield monitors. These technologies are a subset of a wider subject known as precision agriculture, where crop decisions are data-driven. Yield monitors were first introduced in corn and small grain production at least two decades ago and have since become standard equipment on many farms.

The yield monitor works by measuring the mass flow rate of a crop as it is harvested (for example, pounds per hour) and dividing this mass flow rate by the harvester’s field capacity (for example, acres per hour) to calculate a crop yield in terms such as pounds per acre. When coupled with a global positioning system, this crop yield data can be presented in the form of a map, showing spatial relationships of the low- and high-yielding areas in a field.

By itself, a crop yield monitor generates no reduction in production costs, additional yield, or enhanced profits, so determination of a generic return on investment is challenging. However, data collected from the yield monitor can drive management decisions that often do result in higher profitability with payoff periods of one to two years.

Although some work has been done in evaluation and development of mass flow sensing systems for hay production, only one system for yield monitoring hay is commercially available, and yield monitoring systems are not broadly applied in hay. To put this in perspective, among the top 10 U.S. crops by acreage and the top six U.S. crops by value, hay is third in rank and the only one of these crops where a yield monitor is not widely implemented.

Ongoing work at Clemson University involves the development of two independent technologies for hay yield monitoring: a mass flow sensor and a round bale weighing system. Clemson’s hay mass flow sensor (see photo above) works by using ultrasonic sensors to measure the height of the windrow after it is raked and relating this height to a mass of hay per unit windrow length (for example, pounds per foot), which can be coupled with the ground speed of the baler and the rake width to determine hay yield in pounds per acre.

Because this system focuses on measuring of the windrow and not some physical or mechanical operation of the baler, it is adaptable to any hay harvester: round balers, small square balers, and large square balers. Three years of research on this system has generally demonstrated yield prediction errors in the neighborhood of 10 percent or less.

The test was started during the summer of 2016 in a 25-acre irrigated Tifton 85 bermudagrass field and was designed to develop a variable rate nitrogen prescription, or a map of a field with different nitrogen rates being assigned to different regions of the field. The Directed Prescriptions system requires application of a strip test, where different nitrogen rates are applied in fixed rate strips across the length of the field.

Figure 1. Yield data from nitrogen strip tests overlaid onto sand content map (a) and resulting profit as a function of sand content at each nitrogen rate (b). 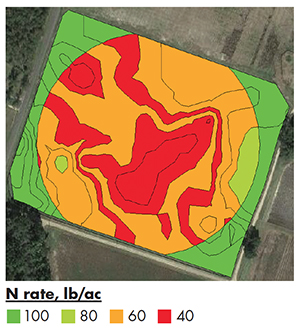 In addition to development of a Directed Prescription for nitrogen, the results of this test also allowed for evaluation of the more widely applied zone management practice for hay production. In zone management, the field is divided into two or more yield management zones, with the objective in defining zones being to maximize yield differences between zones and minimize yield differences within zones. If these zones are properly defined, then crop inputs and other decisions can be adjusted to be most appropriate to the anticipated yields.

This study, which is the beginning of a long-term study involving multiple crop inputs, used the hay yield monitor to reveal how profit might be enhanced in hay production. Prior to the onset of this study, this was an intensely managed, irrigated Tifton-85 field with application of a fixed rate of 100 pounds of N per acre between cuttings. Yield results from this test suggested that if a fixed nitrogen rate was applied across the field, application of 60 pounds of N per acre would result in $12 per acre more profit per cutting when compared to the 100 pounds N rate.

Value of a yield monitoring system is dependent on how its information is used to improve management. Return on investment must be evaluated on a case-by-case and farm-by-farm basis. With four cuttings per year, the study discussed here demonstrated in excess of $50 per-acre per-year potential benefit from implementation of yield data in prescribing nitrogen rates. If a hay yield monitoring system retailed for $7,500, the data collected here suggests that the system could be paid for with only 150 acres of annual hay production with nitrogen fertilizer savings alone.

This article appeared in the April/May 2017 issue of Hay & Forage Grower on page 14.

Vertical tillage not just for row crops Next