By Jesse Bussard
The author is a freelance writer from Bozeman, Mont., and has her own communications business, Cowpunch Creative

A growing trend of obesity and associated metabolic disorders are raising the horse industry’s need for alternative forage sources. Surveys indicate today that 20 to 30 percent of horses qualify as obese (having a body condition score of more than 7.5). 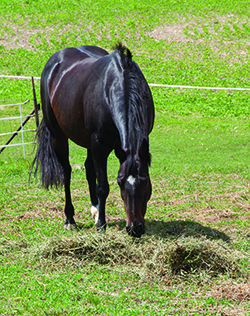 Low-carb hay may benefit those horses that are deemed to be obese and at risk for future health problems.
“Girths are expanding at alarming rates as horses get urbanized and are overfed forage more frequently,” said Natalie Shaw, a certified equine nutrition consultant based in Ellensburg, Wash.

A seasoned horsewoman, Shaw has been consulting on equine nutritional needs for nearly a decade. She notes, that in addition to the rise in overweight equines, the veterinary community has realized there’s a host of diseases directly related to horse diet, and more specifically, the nonstructural carbohydrate (NSC) values in the forage that horses consume. Examples of such linked maladies include laminitis, equine metabolic syndrome, and insulin resistance.

In forage analysis, NSC is made up of two components, water soluble carbohydrates and starches. Forages like teff are commonly lower in NSC and offer a low-carb alternative for these more sensitive equines.

“I heard about teff and understood right away it would fill this niche but pretty quickly realized along with everyone else, it’s super hard to find,” Shaw said.

To solve this scarcity, Shaw sought out answers. Her research led her to Steve Fransen, a forage crops specialist at Washington State University, and eventually, her current pursuit of a Master of Agriculture degree under his tutelage. Shaw’s graduate research, which is now in its second year, seeks to understand the harvest and growth factors that affect NSC levels in forages like teff.

“The directory will connect horse owners with responsible hay growers,” says Shaw. “It’s about bringing the two sides together and getting them talking the same language.”

Shaw says LCHH does this in two ways:

2. Offering a scientifically tested and verified certification program, giving horse owners peace of mind knowing they are buying a hay product that is certified low in NSC and appropriate for their horses.

Shaw said her LCHH certification helps hay growers find new niches and better means to market their hay products. Through the certification program, she said, hay growers will be able to make a premium, up to an additional $20 to $30 per ton, versus regular market prices.

For hay to qualify for LCHH certification, the forage must be sampled and a forage quality analysis conducted to measure NSC values. In addition, Shaw made clear, the LCHH certification is open to all hay crops, not just teff.

Hay samples are sent to Equi-Analytical, a forage and feed testing lab in Ithaca, N.Y., for analysis. Once results are obtained, low-carb hay products are categorized into three NSC levels (less than 10 percent, 13 percent, and 16 percent) based on the forage analyses. These categories were developed based on research that has shown forages with NSC levels below 12 percent are the most ideal for metabolically sensitive horses.

Currently, Shaw has about a dozen hay growers in the Pacific Northwest (PNW) region certified through her program. For other PNW hay producers interested in signing on, Shaw explained enrollment into the LCHH platform is free for producers in 2017. Growers are required to create a basic account on the LCHH website. Afterward, Shaw contacts the grower via phone to ask a few questions about their farm, forage types, and any past hay analyses they may have conducted.

Once the hay is harvested, Shaw visits the farm to core and sample lots from each field and cutting. Each analysis is kept separate for quality control. Each potential hay lot for sale is then categorized by NSC level on the directory. Lastly, Shaw helps producers complete their LCHH account with farm photos and descriptions to make their listings more attractive to the horse community.

In time, Shaw plans to also open up membership in the LCHH program to more hay producers, and eventually, retailers such as feed stores and mills. For now, though, LCHH’s focus remains solely on the Pacific Northwest for the foreseeable future. Shaw says she hopes to expand her company’s services to a more national focus in the coming years once the program is more established.

In due course, Shaw said, “I really hope that LCHH will become the gold standard for certification and trusted source for low-carb horse hay.”

This article appeared in the August/September 2017 issue of Hay & Forage Grower on page 23.

Keeping it in the family Previous