The alfalfa yield gap: What’s holding us back?

By Charlie Brummer, Dan Putnam
Brummer is a forage breeder at the University of California-Davis. Putnam is UC’s forage extension specialist. 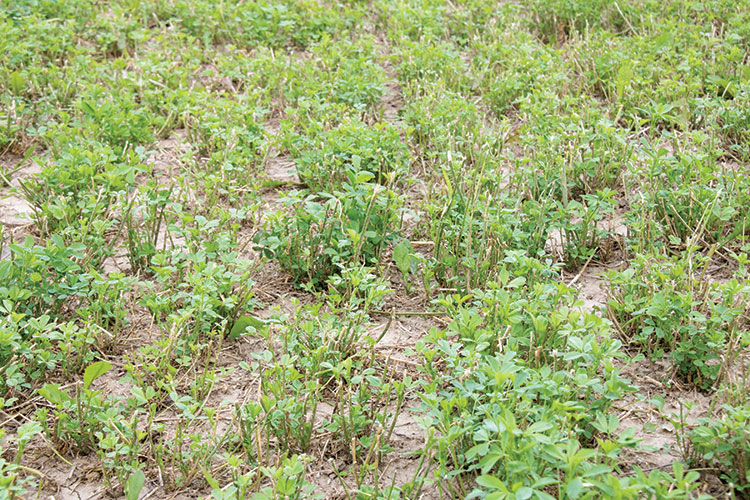 On-farm alfalfa hay yields as reported by the USDA have been flat for the past 20 to 30 years, whether considered nationally or in the major alfalfa growing states (see figures from U.S. and California). This is of major concern to alfalfa and dairy producers who struggle with profitability, but also of concern to scientists and policy makers envisioning a heavily populated world demanding even greater food production.

There is a critical need to improve yields in alfalfa. Getting more yield per acre, and perhaps more importantly, more yield per gallon of water, is critical to keep alfalfa production economical.

Why the yield stagnation, or more critically, what can be done about it?

Here we look at five factors affecting yield that present possibilities for improvement.

Cutting schedules: Perhaps one reason yields are not increasing is because cutting schedules continue to become more aggressive. A well-known yield penalty exists from earlier harvest schedules. We know forage quality of alfalfa hay has been improving since the 1970s, and one reason for this is harvesting alfalfa at earlier stages of maturity. Stated another way, the yield stagnation that we’ve seen could be a result of growers emphasizing quality more than quantity. Newer, reduced-lignin varieties may be able to break this connection to a degree, allowing later harvest with high quality, though confirming this still needs more research.

Breeding: Are new cultivars better or worse than older ones in terms of yield? This is a complicated question, partly because newer cultivars tend to have improved disease and insect resistance packages. Thus, a newer cultivar will outyield older ones in the presence of diseases and insects. However, in the absence of the pest or disease, yields may not be very different.

The yield of the top variety in the first year of variety trials in Northern California — before diseases become an issue — has increased over the past couple decades, but this has not occurred either in Central or Southern California. In Southern California’s Imperial Valley, new varieties yield higher as a percentage of the old standard cultivar CUF101, demonstrating that even if yields aren’t improving, new cultivars are better adapted to the conditions facing producers today.

In other words, like the Red Queen in Lewis Carroll’s “Through the Looking Glass,” what new varieties are doing is running faster and faster just to maintain yields at current levels.

Fall dormancy: The yield-quality trade-off is also associated with fall dormancy. Less fall dormant varieties tend to produce higher yield (provided they still have sufficient winter hardiness for the growing zone), but they also tend to be stemmier and have higher fiber content than more dormant varieties. Thus, a grower who weighs quality over quantity could grow a more dormant variety than optimal for the production region, thereby lowering yields but maximizing quality.

Traffic: Driving hay equipment across fields multiple times per harvest and during multiple harvests per year damages an alfalfa stand. Based on some yield trial data from California, Wisconsin, and other states, yield losses of 20 percent could be ascribed to traffic damage, with some varieties losing more than 25 percent.

Because the rapidity of regrowth is enhanced as dormancy declines, a shift to more nondormant cultivars would likely result in additional wheel-traffic damage. Removing cut forage as soon as possible after harvest will reduce the damage to alfalfa regrowth and minimize yield losses due to traffic.

Water and irrigation: Water management (insufficient or excess soil moisture) is likely to limit yields to a greater degree than any other factor. About 50 percent of the U.S. alfalfa crop is produced under irrigation. Drought is one factor, but even when irrigation water is available, poor water management can lower yields.

At the other end of the water spectrum, alfalfa is highly sensitive to flooded conditions, and poor drainage or difficult soils limit yields in many environments at least as much as lack of water. As alfalfa is moved onto more difficult soils, this could also be a factor.

Even within a region, the maximum yields possible are far less than the yields that growers actually receive. This is termed the “yield gap,” which Michael Russelle wrote about and presented at a recent Western Alfalfa & Forage Symposium (bit.ly/HFG-WestAlfalfa). For example, we have measured yields at 16 tons per acre in California, and Arizona has reported 24 tons per acre in research trials, but average yields are less than half these amounts. Thus, we know that yield progress is possible using various approaches.

What are some of these strategies?

Genetics and breeding: Newer genomic technologies, particularly when linked with advances in remote sensing to predict yield and other traits, offer new ways to develop high-yielding cultivars. Continued effort to break the dormancy, quality, and yield relationships could further stimulate productivity. Finally, conducting breeding under new management systems, such as subsurface drip, should result in varieties tailored for those environments.

Mechanization and harvest strategies: This was a major component of yield improvements from the 1920s through the 1980s. Further improvements are possible. Any effort to shorten dry-down time, such as hay in a day, reduce windrow effects and soil compaction, and to limit the amount of traffic is likely to substantially improve yields. Timing for harvests interacts with harvest scheduling and irrigation management in important ways.

Can we envision harvesting equipment that has near zero influence on crop growth or soil compaction? There are tremendous engineering possibilities for improvements in yields.

Irrigation technology: Here is another area where there are opportunities for improvement, by enhancing uniformity, scheduling, soil moisture monitoring, and timeliness. There are tremendous gains to be made here. Alfalfa is difficult to optimize in terms of irrigation, since harvest schedules interfere with irrigation. Growers often don’t apply the right amount of water due to limitations in watering technique and harvest schedule, and this is a critical limitation to yield improvements in the West.

Soil fertility and condition: Unfortunately, many alfalfa growers do not conduct soil tests or tissue tests to determine whether a nutrient is required. Often, what is going on below the surface is ignored.

What about subsurface drainage and soil impediments?

Alfalfa takes up substantial phosphorus, potassium, and sometimes sulfur. All of these can limit yields if ignored. The same is true where micronutrient deficiencies exist. Analysis of soil condition and fertility is certainly an area that provides opportunity for yield improvement on many farms.

In summary, we all want to see yield improvements to keep alfalfa an economically viable crop. There are several critical areas that might be important, including harvesting schedules and techniques, plant genetics, irrigation management, and soil improvement. It’s important for alfalfa growers to communicate with researchers and industries what their needs are to set long-term yield goals for the industry. 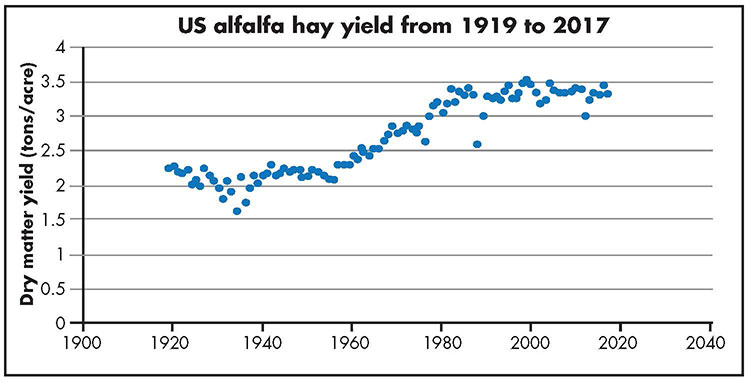 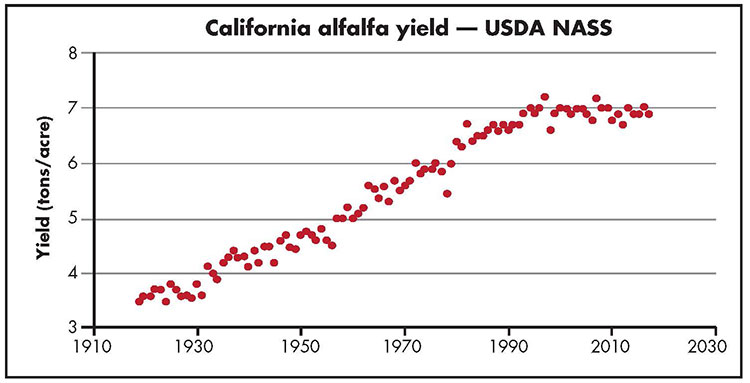 Working through winterkill Next