By Jennifer Macdam
The author is a professor of plant physiology and forage production at Utah State University in Logan. All cattle are “grass-fed” until they reach the finishing phase. Calves are usually sent to a feedlot for finishing, where they’re put on a high-concentrate diet to add marbling (intramuscular fat) that makes “grain-fed” beef tender and juicy.

Ongoing studies at Utah State University are demonstrating that spring-born cattle can be finished on legume pastures in a time frame similar to feedlot-finished cattle. The secret to higher gain — and higher consumer acceptability relative to grass-finished beef — is the exceptionally high quality of the forage, which has low fiber and high energy, and is similar in nutritive value to a feedlot-finishing ration.

Most pastures are seeded to grasses or grass-legume mixtures. Compared with a feedlot ration, well-managed grass-based pastures have all the protein that’s needed for finishing, but are low in energy (readily digestible carbohydrates). Grasses are, however, high in fiber, reported as NDF (neutral detergent fiber) on a forage quality analysis.

The bulk of NDF is cellulose, which is digested by microbes in the rumen and releases plenty of energy to keep a growing steer healthy. However, NDF digestion takes far longer than the conversion of starch into energy, and cattle require a high level of energy to accumulate intramuscular fat during a 90- to 120-day finishing period. Concentrate diets are low in fiber and high in nonfibrous carbohydrates, so intake and gains are higher in the feedlot than on grass-based pastures. 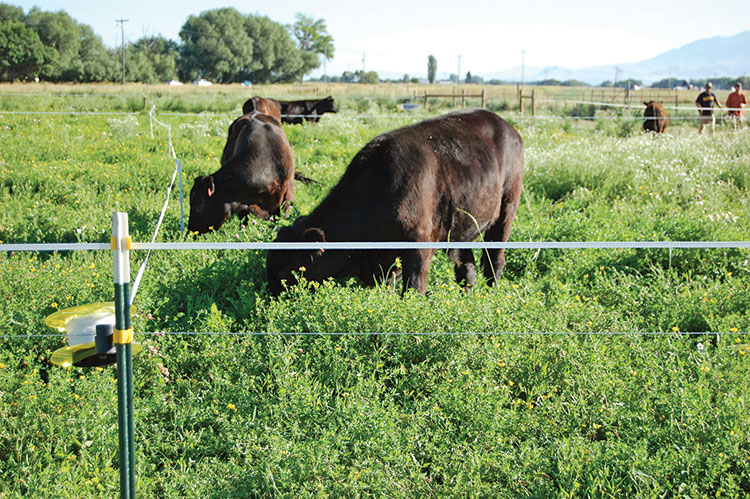 Birdsfoot trefoil has performed well in grass-finished beef trials. The low levels of tannins in the species aids in protein utilization and helps to prevent bloat.

A study of beef gain on irrigated birdsfoot trefoil pastures near Logan, Utah, demonstrated that steers could gain more rapidly on irrigated birdsfoot trefoil than on high-quality irrigated grasses (Table 1). The spring-born Angus steers used in the beef-finishing study were weaned at about 7 months and were fed a ration of alfalfa and corn silage for another 7 months until they began their respective finishing diets.

From the end of May, when they weighed about 1,000 pounds, until slaughter in mid-September, they grazed irrigated grass or birdsfoot trefoil pastures, or were fed a ration containing about 85 percent concentrates. None of the cattle were implanted or supplemented with growth stimulants.

Steers were on finishing diets for 111 days, and their final body weights were 1,420, 1,228, and 1,129 pounds on the feedlot, birdsfoot trefoil, or grass pastures, respectively. Cattle were all slaughtered at the same age (18 months) and assessed for carcass quality. Grain-finished and birdsfoot trefoil-finished steers had similar carcass weights and fat thicknesses at slaughter.

What are the characteristics of birdsfoot trefoil that result in better gain and higher carcass quality compared with grass-finished beef?

Perhaps of more interest to consumers, how does a 90- to 120-day finishing period on birdsfoot trefoil pastures result in meat that’s juicy and tender, like grain-finished beef, while retaining a more healthful balance of fatty acids like grass-finished beef?

We know that legumes are lower in fiber and higher in protein than grasses, but the key to better beef production appears to be the high levels of nonfibrous carbohydrates in birdsfoot trefoil. Comparing the nutritive value characteristics of the three diets (Table 2), fiber (NDF) is similarly low in the legume and concentrate diets, and readily digestible (nonfibrous) carbohydrate is similarly high for the legume and concentrate diets.

In the Mountain West, soil pH is neutral to alkaline, which is ideal for perennial legumes. Growing season temperatures are high during the day but cool at night, which reduces plant respiration and allows grasses and legumes to retain more of the carbohydrates made by photosynthesis. While climate may explain the persistence and yield of birdsfoot trefoil under irrigation in the West, a University of Missouri study resulted in Angus crossbred steer gains of 3 pounds per day on birdsfoot trefoil pastures compared with 1.5 pounds per day on tall fescue.

The tannin concentration of birdsfoot trefoil is relatively low, between 1 and 2 percent of shoot dry matter in pastures, but this is high enough to prevent bloat. All tannins precipitate plant proteins in the rumen, boosting bypass protein, but the type of tannin in birdsfoot trefoil and its low concentration do not interfere with the subsequent digestion of this protein. In fact, studies have demonstrated higher gains and greater milk production from ruminants grazing birdsfoot trefoil than alfalfa, perhaps because protein is more efficiently utilized.

Although the birdsfoot trefoil finishing diet was higher in crude protein than the feedlot diet, tannins precipitate excess proteins in the rumen and allow them to be digested later, along with microbial protein.

Less nitrogen is partitioned into the urine of ruminants grazing tannin-containing legumes, and so more nitrogen is excreted in the feces compared with nontannin legumes like alfalfa. This means less ammonia is volatilized from urine, and the likelihood of nitrate leaching or runoff after rainfall or irrigation is also reduced.

Cattle finished on legume pastures that have as much energy (nonfibrous carbohydrates) as a feedlot diet still meet the definition of “grass-fed” beef, but the higher available energy means that yearlings can be finished in a single grazing season. Finishing cattle on pastures rather than in a feedlot has appeal for consumers (and chefs!). Now that we know that finishing cattle on birdsfoot trefoil pastures results in tender, juicy meat with a healthy fatty acid profile, we’re interested in identifying other tannin-containing forage legumes with similarly low NDF and high nonfibrous carbohydrate concentrations.

It’s supposed to be spring Previous