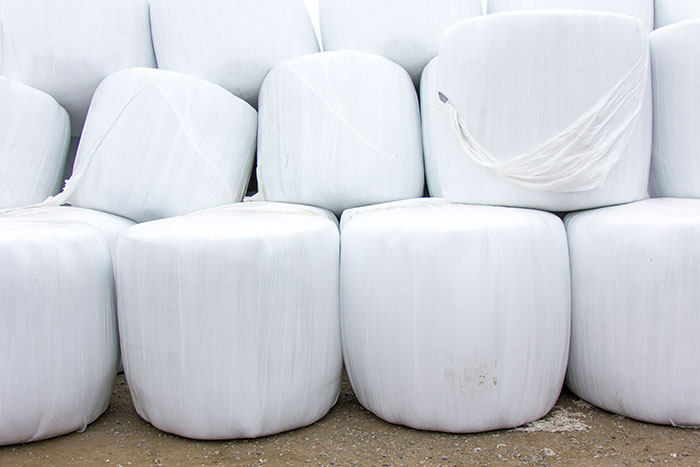 It’s been one of the biggest changes in the forage industry during the past 10 years. That “it” refers to putting up high-moisture hay as baleage, which can result in some of the best forage you’ll ever feed or a product that more resembles manure than fermented hay.

The surge in baleage production throughout humid regions is easy to explain. Though there are economies of scale, they are not nearly so much so as a traditional chopped haylage system. Those farm units that are already set up to use large round bales can just as easily use baleage. The ability to harvest and preserve high-moisture hay shortens the potential harvest window, a real advantage where rain comes often and hard.

To help producers avoid the pitfalls of baleage production, Taylor Hendricks, a Ph.D. candidate at the University of Georgia, outlined some of the keys to making great baleage at the Baleage & Silage Short Course held in Forsyth, Ga., last month.

Cut down no more than you can handle: Bales need to be wrapped within 12 hours of baling to avoid dangerously high internal bale temperatures. Sooner is even better. For first timers, be conservative in your estimates because there will always be a learning curve and unexpected bottlenecks with equipment and logistics. Baleage can often be made the day after cutting or the same day if drying conditions are excellent and hay is cut early enough in the day.

Choose the right wrapper: Hendricks explained that there are several things to consider when selecting a bale wrapper. Cost is generally the first one as there is a large difference between the “wrap on the go” balers and a simple individual bale wrapper.

Available labor is also an important consideration. Are bales going to be moved simultaneously as the baling is done or is it going to be a “one-man” operation? In-line wrappers are more efficient (more bales wrapped per hour) than individual wrappers, but they are also more expensive.

Do your homework before purchasing a wrapper and explore options for a custom operator to do the wrapping for you. Conversely, if you purchase a wrapper, doing custom wrapping yourself is a means of helping to justify the purchase. Renting a wrapper is also a possibility in some situations.

Bale within the right moisture range: “In terms of overall importance, this is key Number 1,” Hendricks said. “The ideal range is 50 to no more than 65 percent moisture. Too wet, and there is a risk for clostridial fermentation and potential botulism poisoning in cattle. Below 40 percent moisture, there is really not going to be good fermentation, which results in a higher than desired pH,” she added.

Consider inoculants: Though not always beneficial, inoculating baleage with a heterofermentative or homofermentative inoculant can provide good fermentation insurance, especially under less than optimum conditions where the forage is too dry or too wet.

Make a well-shaped, dense bale: Hendricks reminded the attendees to match the tractor with the baler and to use a baler designed for making baleage. She said that a desired target for bale density is about 15 pounds per cubic foot. A minimum of 11 pounds per cubic foot is acceptable. Dense bales will harbor less oxygen. Balers equipped with precutters may offer a slight advantage in making a dense bale.

The most efficient and effective wrapping occurs when bales are uniform with square edges. This is especially important with in-line wrappers to avoid creating air gaps between bales in the line.

Choose an appropriate site for wrapping: “The ideal scenario is that you can wrap at the storage site and close to where you will feedout,” Hendricks said. “Handling needs to be kept to a minimum after bales are wrapped; this reduces the risk of bale damage.”

Choose an area that can be kept pest free and doesn’t allow for a lot of weed growth that can’t be controlled. When storing individual bales, research shows that it is best to store them on their flat end rather than on their round side to reduce surface mold.

Apply enough plastic: The plastic is not impermeable to oxygen, Hendricks reminded. For in-line wrappers, she said at least eight layers of plastic are needed. For individually wrapped bales, at least six layers are recommended.

Have a good feeding strategy: This involves feeding the baleage within nine months of harvest because forage quality begins to deteriorate after that point. It is also desirable to let bales ferment at least eight weeks before they are fed. Finally, use a feeding system that won’t promote waste.

Hendricks reminded producers to feed baleage to those livestock classes that can best utilize its superior forage quality. In some cases, it can be used as a supplement for lower quality forage that is also being fed.