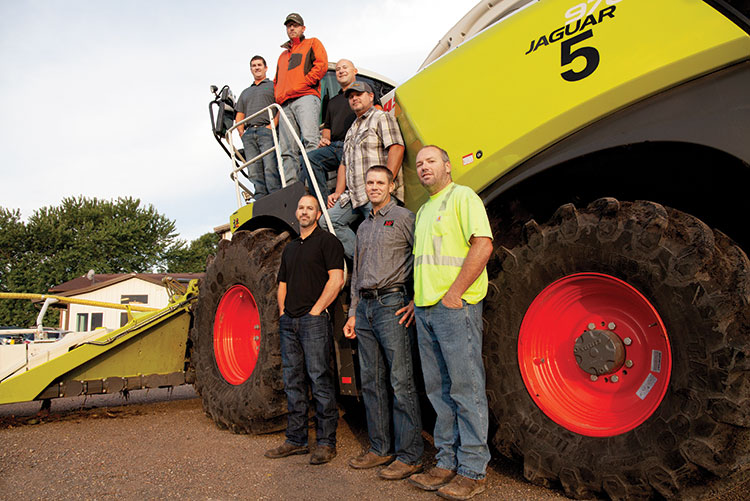 The rain was tallied in whole-number inches overnight; previously, it had already been on the wet side. The productive, flat farmland of west-central Minnesota was unable to drink anymore, so any field operations were on hold for at least a day or two.

I had hoped to get some field action photos of one of the CY Harvesting crews, a custom forage harvesting outfit based in Murdock. That wasn’t going to happen, but something much better did.

Nate Collins directed me away from the large dairy where we had planned to meet and toward his farm office a few miles down the road. It was there that I met with seven owners of CY Harvesting, one of the most unique forage-based businesses that you’ll find anywhere in the United States.

Collins Family Farms is a cash-crop operation that grows corn, soybeans, and alfalfa. In fact, all of the owners of CY Harvesting are cash-crop farmers. That’s only one aspect that makes the forage harvesting business so unique.

So how do a bunch of unrelated cash-crop farmers band together to build a custom forage harvesting business that now annually harvests 15,500 acres of corn for silage and nearly 4,000 acres of alfalfa?

Well, it all started quite innocently.

“Fifteen years ago, my brother Sean and I were standing outside in the yard when a neighbor stopped and asked if we’d be interested in driving a silage truck while we waited for our own crops to reach harvest stage,” Collins explained. “We drove silage trucks for three years.

At that point, Riverview Farms was building a large dairy near Murdock, and we approached the owner and told him that we’d be interested in harvesting their forage. About a month later, he called us back and said to get a crew together. Next, panic set in,” he recalled.

The Collins brothers partnered with another cash-crop operator, Mike Yost of Yost Farms, and together “figured it out”; they went to work with one chopper and four trucks. Riverview Farms was soon expanding by building additional large dairies in the area. Over time, Riverview built five large dairies and CY Harvesting added owners of four cash-crop farms and some of their employees to comprise the nine owners of CY Harvesting.

How it all works

CY Harvesting is a big business with low overhead. The company owns six Claas choppers and eight Oxbo hay mergers. The equipment is stored at existing farm shops among the ownership farms. Most of the equipment maintenance is done at Yost Farms. CY contracts all of their management and labor with their ownership farms plus about 20 partnership cash-crop operations that help supply trucks, trailers, and tractors during the forage harvest seasons.

Every farm is paid by the running hour on the truck or tractor. The partnership farm, in turn, pays their employees for their forage harvesting hours. CY Harvesting, in effect, has no employees of their own.

The trucks and tractors that are supplied during the forage harvest generally already exist on the partnership farms and are used in their respective cash-crop operations as well. In most cases, when the equipment is needed to harvest forage, a downtime exists for cash crops.

One exception to the need for new equipment are forage box trailers, something most cash-crop farms would not have. Collins explained that they currently recommend partner farms buy a Meyer forage box with a poly floor and full-width apron chains. “The box can be used for most other purposes such as hauling grain or sugar beets,” he said.

“We’ve built something big, but it’s been done with a lot of people who each had a role,” Collins said. “No one person can take credit for our success.”

“All of the owners have the same goal in mind,” added David Beyerl, a CY owner and employee of Yost Farms. “We’ve grown because we have really good people. In this business, execution and keeping track of details are the keys to doing a good job.”

When talking to the ownership individuals, one really gets the sense that the group is a band of brothers who have forged deep friendships while building a successful and unique business. These guys really like each other but at the same time operate with military-like precision. One of the owners described it as being similar to the old threshing days when everyone in the neighborhood would come together and get the job done.

Collins offered this example: “One time, we had hay unexpectedly ready to chop on Memorial Day. We sent out a text message at 5 p.m. and everyone showed up except for two guys who were out of the state. That’s an indication of the commitment to our mission.”

“We do things differently than most custom forage harvesters,” Collins said. “For one thing, we run around the clock for six days a week during the silage season.”

CY Harvesting has their workforce divided into six different crews per 12-hour shift. The shifts begin at 2 p.m. and 2 a.m. with nine or 10 people assigned to a crew. Each crew has a designated site manager who coordinates day-to-day schedules and monitors crop moisture levels in the field. There is also a chopper operator, a truck boss, a dozer operator, and a merger operator in the case of alfalfa harvest. Jesse Pabst, who is employed at Molenaar Farms and is a CY owner, works on a crew but is also the lead person to ensure silage piles are formed and constructed properly. 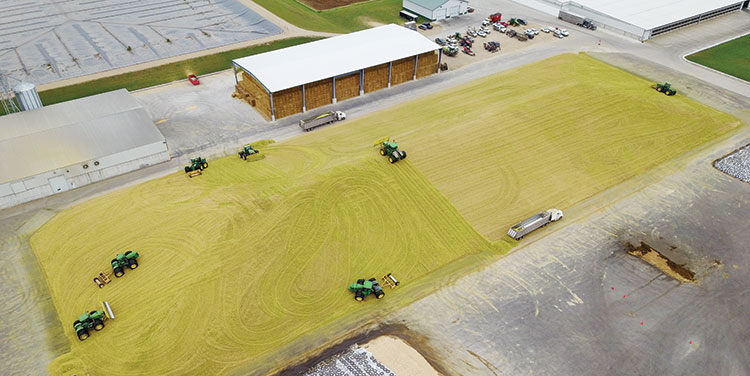 The crews at CY Harvesting are meticulous when building a large silage pile.

“Communication is the key to making it all work,” Collins emphasized. “You have to be thinking about what you’re currently doing and what needs to happen 18 hours out. That means everyone has to be thinking and talking.”

One-half hour before a shift begins, each crew meets to go over truck routes and field sequences. Choppers are refueled and inoculant additives are replenished as needed. During peak times, CY can be operating at up to four farms at a time. Anywhere from one to three choppers might be operating at a specific Riverview Farm location.

CY harvesting is paid by Riverview Farms based on harvested tons. For corn silage, that’s wet tons and for alfalfa it’s by dry weight. Interestingly, and a credit to their reputation, no written contract exists between the two entities.

“Even though we’re CY Harvesting, we represent Riverview Dairy,” Collins said. “In fact, we’re their most public face. For that reason, we make a concerted effort to be good neighbors.”

That “Mr. Rogers” policy entails having a crew member scraping mud off the road as needed and watering gravel roads to minimize dust created by the steady stream of silage trucks.

“One of our primary business goals is to make sure that all crew members make it home safely at the end of their shift,” Collins said.

To accomplish this, safety is given a top priority status in everything that CY Harvesting does. It’s emphasized when new crew members are added and at an annual safety meeting, which is attended by about 150 people. All workers wear high-visibility clothing when they’re on the job.

“We go over a lot of the same rules and laws every year at our safety meeting, but we want everyone to know that we’re serious about personal and road safety,” Collins said. “We can’t afford to have someone run a stop sign because they’re talking on their cellphone. On the flip side, a cellphone is a needed tool in our business as we can text pin markers to field entrances or other important information. We just tell people to make sure their truck is stopped before looking at it,” he added.

Though CY Harvesting is focused on providing quality forages for the five Riverview Dairies they work with, the owners’ commitment to each other and their crew members is what really stands out among this bunch. The emphasis on safety and training is just one aspect of that. Making schedule arrangements for crew members to attend important family events is another.

The owners rightfully take a tremendous amount of pride in the business they have built, but their success is rooted in passion and enjoyment for the job. Said one of the owners, “We’re just a bunch of cash croppers; forage harvesting is what we do to have fun.”

Passion and fun, yes, but there’s also been a much greater good. Indirectly, CY Harvesting has enabled farm family members in the area to come back to their previously “cash crop only” home farms because of the additional income generated by the forage harvesting business. “By my last count, that number is about 10 returning family members,” Collins said.

Now there’s a business metric to be proud of.

What’s wrong with this silage? Previous