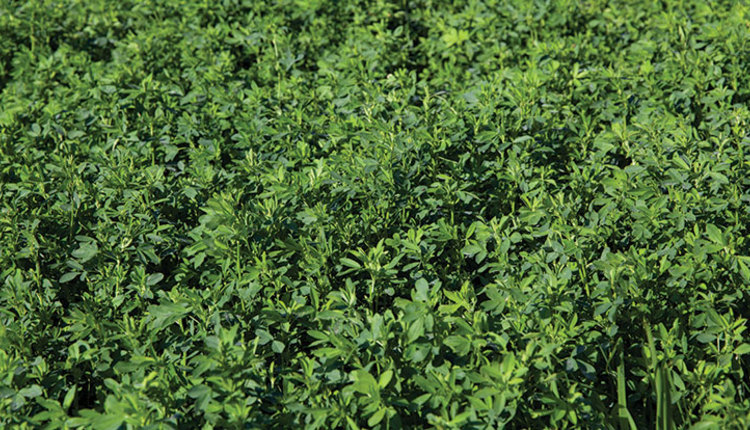 Alfalfa is an important livestock feed, especially for dairy production and horses. Genetically-modified (GMO) resistance to glyphosate herbicide became available to farmers in 2011. In 2014, a second GMO trait, reduced-lignin, was deregulated and marketed as HarvXtra. The reduced-lignin alfalfa trait was achieved through RNAi-mediated targeted silencing of CCMOT, a key enzyme in the lignin biosynthesis pathway.

Traditional alfalfa varieties are required to be cut prior to significant flowering if high-quality hay is desired. The reduced-lignin HarvXtra alfalfa trait helps solve the nutritional quality issues associated with delayed cutting.

Reduced-lignin alfalfa is intended to provide hay growers with greater flexibility in harvest timing and potentially boost forage yields. In the U.S., growers typically use a 28-day cutting schedule (less than 10 percent bloom) to produce three or more cuttings of alfalfa during a growing season. This regime allows little room for weather events such as rainstorms or humid drying conditions that delay cutting. If they do occur, forage quality is compromised, although delayed cutting generally improves hay yields.

For an alfalfa grower, yield (longer cutting window) and quality (shorter cutting window) have always been at odds. With HarvXtra varieties, the harvest window can be extended for up to 35 days, which is the point of maturity where forage quality is equal to conventional varieties that are normally cut at 28 days.

The delayed cutting strategy can potentially result in the elimination of a seasonal harvest while also capturing additional yield. However, more plants will reach the flowering stage and perhaps lead to a higher risk for adventitious presence (AP, or unwanted genes in seed lots) of GMO genes in areas where non-GMO varieties are grown for seed.

Dan Putnam, extension forage specialist with the University of California-Davis, reported that gene flow from GMO hayfields to conventional seed fields would be influenced by several factors. These include:

Because alfalfa is an outcrossing, bee-pollinated crop, the potential for gene flow has been widely recognized. Adventitious presence is a concern because the U.S. is a major exporter of alfalfa seed and hay, and many countries have regulatory requirements for GMO-free products. The organic industry also requires GMO-free feeds. There has been concern that GMO hay may contribute enough GMO pollen to cause AP levels in nearby conventional seed fields that would negatively impact AP-sensitive markets.

Industry has led efforts to develop a set of best management practices for GMO and AP-sensitive seed producers. They have also developed coexistence documents for alfalfa hay and seed exports and organic hay and seed markets. The Association of Official Seed Certifying Agencies (AOSCA) has developed the Alfalfa Seed Stewardship Program (ASSP), a certification program to support marketing of AP-sensitive alfalfa seed.

Although alfalfa is often cut before flowering, there are still potential sources for gene flow from GMO fields. Alfalfa plants flowering along the hayfield border.

Where feasible, producers of AP-sensitive seed can further reduce the risk of gene flow to the seed field from other varieties of hay in several ways: 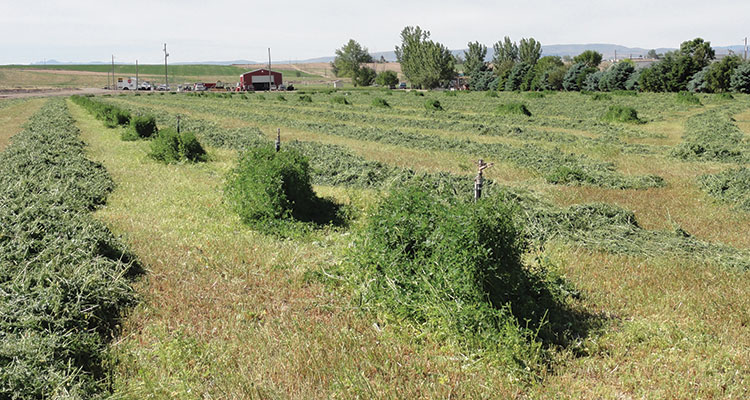 Issues with delayed cutting of reduced-lignin alfalfa have been minimally explored; therefore, my colleagues and I were interested in quantifying the extent of gene movement from GMO hayfields to conventional seed fields on a landscape level to provide the industry with information to support coexistence strategies.

Time hay cutting by ditching the calendar Next